AI-powered self-service platform for all your sourcing decision needs across 1,600+ categories llike Water.

The average annual savings achieved in Water category is 8.10%

The industry average payment terms in Water category for the current quarter is 45.0 days

Find the right-fit water supplier for your specific business needs and filter by location, industry, category, revenue, certifications, and more on Beroe LiVE.Ai™.

Water is abstracted from ground or surface water resources by the water companies. The raw water collected is treated for drinking quality and distributed to the end users through supply network 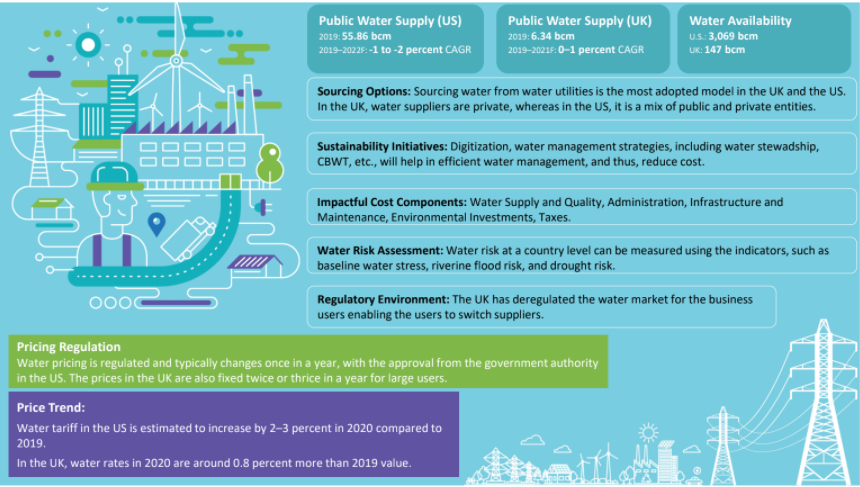 Water can be sourced in multiple ways as provided below. Best practices in water management, such as recycling, water efficiency monitoring, etc., either optimize the current water usage or improve the water availability.

The UK has the highest cost-saving opportunities, due to the deregulation of market and potential to switch suppliers

Industries can apply for water abstraction license for self-supply. However, the stringent environmental regulations could make this difficult in the future

Majority of the water supply is through cities, municipalities, water districts, etc.

South Africa is a water-stressed country, due to low rain and increase in water withdrawal. The country was affected with drought in several parts in 2017.

Salt water flow to the Nile river and Dam construction in Ethiopia are the key risks affecting the Nile water source in the country.In Egypt, the water supply companies are mostly under HCWW. The private participation is mainly in water and waste water treatment.