Oil prices recover from losses and increase due to supply concerns.

Oil recovers after a sharp selloff as supply worries resurface

The average annual savings achieved in Crude Oil category is 8.10%

The industry average payment terms in Crude Oil category for the current quarter is 60.0 days

The fuel oil supply and demand in the global market stand at 92.7 Mbpd and 98.18 Mbpd (Million Barrels per day) respectively. According to Beroe's crude oil market report, the demand for fuel oil is expected to continue growing at a CAGR of 1.8 percent through 2022.

According to the crude oil market news by Beroe, it is anticipated that the crude oil prices will see a downward trend owing to the rise in supply and long-term hedging contracts.

The supply and demand for crude oil in the global market has been stable and has sustained above 100 million barrels. The implied surplus line is sloping sideways and the high relative levels of the surplus will weigh negatively on the prices of crude oil.

The major demand centers of crude oil in Asian market are India, China, and Korea. These regions are also the major driver of crude oil prices.

The US imports crude oil from Canada and Mexico, while the European oil imports come from Russia, other FSU countries, the Middle East, and North Africa. 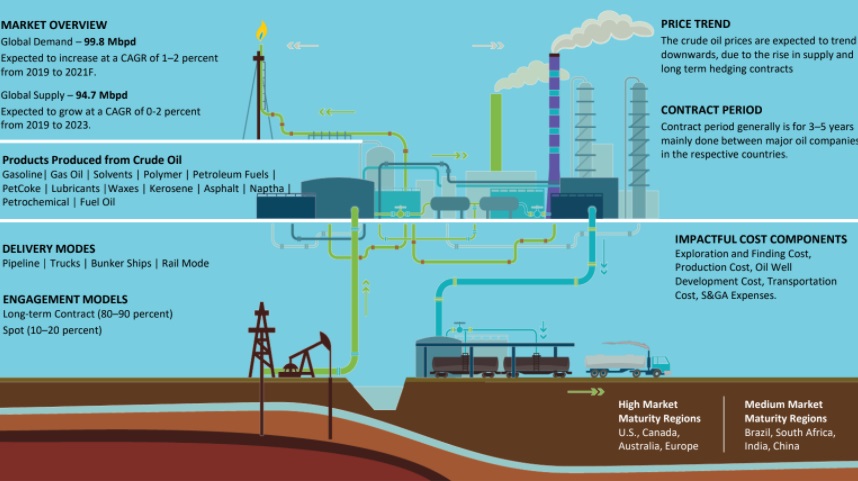 Distribution of Proved Crude Oil Reserves from 1995 to 2018

Per Capita Consumption of Oil in 2018