The average annual savings achieved in Fuel Oil category is 8.10%

The industry average payment terms in Fuel Oil category for the current quarter is 46.4 days

By 2020, it is expected that the fuel oil market will decline at a CAGR of 4.08 percent. According to the oil market data, new policies and regulations have emerged owing to the health and environmental concerns caused by the high sulfur content of residual fuel oil. This has resulted in significantly low expectations for the future of residual fuel use at the global level.

Looking at the oil market trends and forecasts, the market share of the petrochemicals sector is likely to increase from the current 13 percent to 15 percent by 2040.

The IMO regulations will encourage consumers to switch from fuel oil to diesel. With the reduction in the use of residual fuel for power generation and space heating, the global demand for fuel oil will also subside. According to the global oil demand forecast, the shift from fuel oil-based heating in ships by 2020 will result in an excess of heavy fuel oil, which will be available at a hefty discount.

While the demand for fuel oil is expected to decrease, Saudi Arabia has been among the few countries that have increased their fuel oil intake realizing that it is uneconomical to use their own crude oil for power. The global standards for oil use and stringent environmental policies are resulting in significant supply and demand risks in the global market. Despite the lower demands of fuel oil globally, new refining capacity is concentrated in locations in APAC where demand seems to be growing. 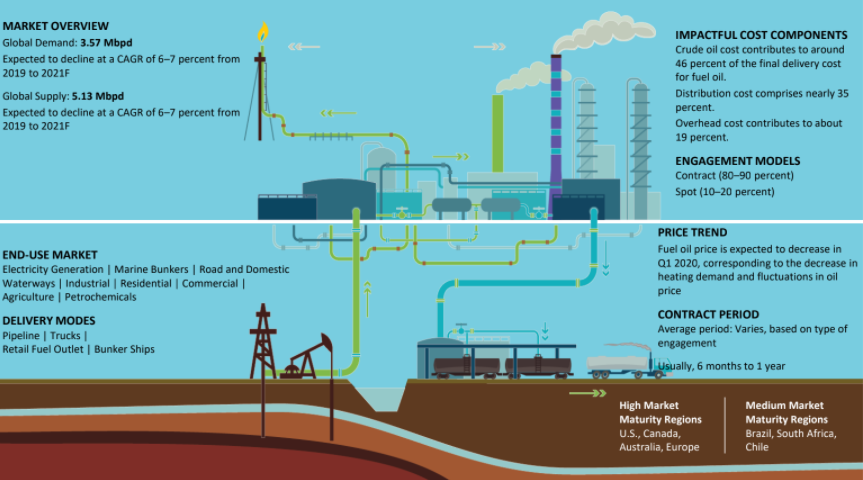 The report on the fuel oil market provides an extensive analysis of the key price drivers, supply-demand trends and trade dynamics of global manufacturers in North America, Europe, APAC, LATAM, Africa and the Middle East. It further discusses Porter's Five Forces Analysis and presents a fuel oil price forecast trends analysis in the pre-set regions. The report includes an in-depth study of the fuel oil companies such as ExxonMobil, Royal Dutch Shell, and British Petroleum along with their SWOT analysis.