FPSO'sare floating vessel used in the offshore oil and gas industry for production, processing and storage of hydrocarbons. These are viable solution for number of offshore field situations

TotalEnergies has launched three projects of multi-energy strategy in Angola

Keppel O&M Ltd have been awarded contracts worth $54.5 Million in Floating Production contracts

The industry average payment terms in Floating Production Storage and Offloading (FPS & FPSO) category for the current quarter is 45.0 days

As per Beroe's FPSO market forecast, the FPSO market share is expected to reach $44.12 billion by 2022.

The latest FPSO market trends are that the global market is dominated by a few major players whereas NOCs have their own FPSOs, the biggest barriers to new emerging players in the market are hiring an experienced crew, and supply and demand are the key drivers for price change in the market.

The FPSO market forecast in terms of estimated growth is about 14.42% CAGR. 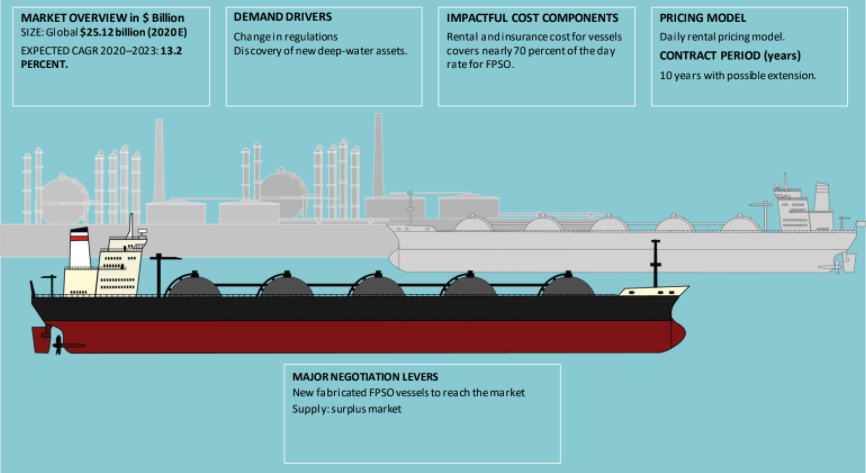 The Discovery of deepwater assets will be a key reason behind the increase in demand. However, the supply market is expected to be surplus in nature, irrespective of the crude price recovery, due to medium demand in the market for FPSO service. Therefore, client can look to engage with a floating production and offloading supplier on a long term basis

New offshore discoveries, increase in spending from E&P companies, and changes in regulations are set to drive the demand for FPSO

There are many factors that affect the demand for FPSO and FPO. Factors that drive the supply-demand are usually the main determinants of the floating processing unit (FPU) market and converted tanker growth. Regional political developments also impact the industry. If there are any environmental regulations and changes in other rules and regulations that affect the market, they are described. The primary driver for demand for an FPS / floating production storage and offloading vessel is the oil-field capex and supply-demand for crude oil globally. New discoveries of oil and gas naturally drive the offshore processing unit growth and the requirement for FSU / floating storage unit production vessels.  The cost of oil also determines how feasible it is to charter a floating storage offloading vessel. Crude oil rates also determine the cost of running a floating production, storage & offloading vessel. The daily cost feasibility has a direct effect on market demand for storage vessels.

This section of the report details the cost of having a floating production offloading vessel or converted storage tanker and helps one understand the financial advantages and disadvantages of having one. The cost structure analysis of FPSO helps one understand the breakup of the expenditure on an FPSO. One can understand the nuances of the expenditure on an FPSO and be able to understand what the actual cost will work out to be. The report also gives details of the contract models that are followed in the industry. It is informative about the different advantages of each contract model for an offshore storage unit and the geographies in which each is more popular.

Noteworthy technological advancements that impact offshore oil & gas production and the floating processing vessel and floating storage offloading vessel market are detailed in this section of the report. This includes any proprietary or patented technology that has made an impact. The crude industry is also constantly improving the efficiency, safety, and sustainability aspects of offshore oil & gas storage and production, and the key improvements and trends in cost-effectiveness,  sustainability and safety of offshore oil & gas processing are presented.

Why Should You Buy This Report