Directional drilling is a technique of controlling trajectory and deviation of a wellbore, along a pre-planned path to tap the oil from targeted locations, which otherwise would have been left inaccessible

US and Canada rig counts increase by 9 units this week

The industry average payment terms in Directional Drilling Services category for the current quarter is 30.0 days

According to Beroe's directional drilling services market report, the market was estimated at $9.01 billion in 2018. By the end of 2021, it is expected to reach $10.77 billion growing at a CAGR of 6.13 percent.

Schlumberger, Baker Hughes, Halliburton, Weatherford, Scientific Drilling are the top global players contributing to more than 60 percent of the total directional drilling services market size. Over the years, Schlumberger has been the market leader with a global share of about 30 percent.

As most of the producing wells have reached their matured stage, North America and the Middle East regions are highly lucrative markets for directional drilling.

The emerging renewable energy markets and the stringent government and environmental regulatory prices are turning out to be major constraints for the drilling services market.

As per Beroe's drilling services market outlook reports, North America holds the largest market share followed by the Middle East. As more projects come up in the near future, the demand from these regions will dominate the market.

The supplier power is pushed to medium due to the stabilizing crude oil prices although the criticality, complexity, and technology that the services involved are high. Suppliers gain an added advantage because of the high costs involved in the switching and learning curve that limit buyers from switching among the suppliers. Moreover, the horizontal directional drilling market is consolidated by four major players globally.

The first reason is, a majority of the equipment used in directional drilling services is patented to major service providers due to which buyer power is less. Secondly, the equipment and services are quite complex which makes the buyer rely on major suppliers.

After the crude oil price crash, many players downsized their tools and equipment leading to a shortage of availability. Consequently, this might cause a noticeable rise in prices in the future. 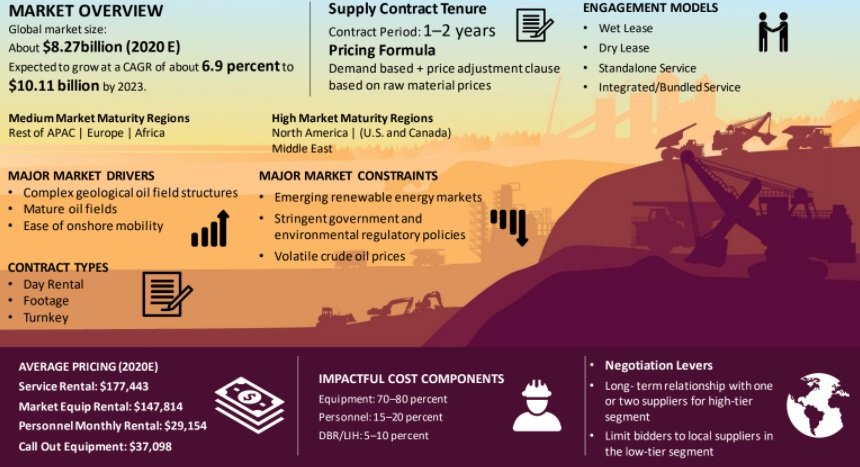