Epiroc wins large battery-electric equipment order from Glencore for all electric mine.

The industry average payment terms in Underground Mining Equipment category for the current quarter is 75.0 days 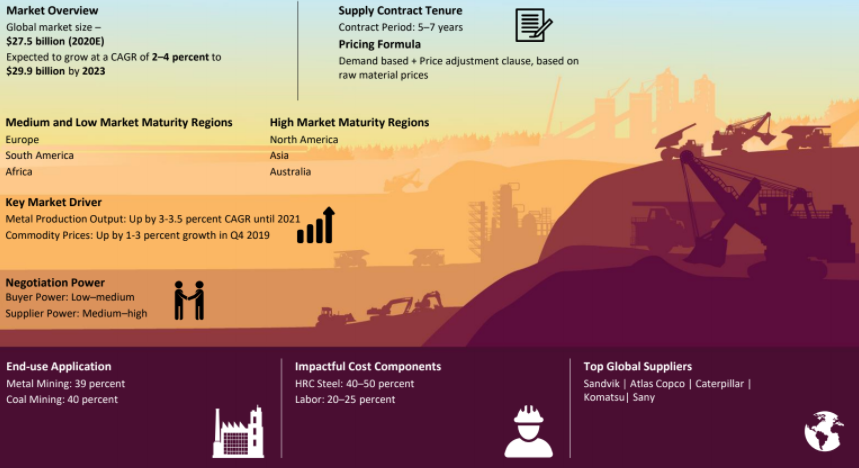 The underground mining equipment market size was $24.5 billion in 2017 and it is expected to grow at a CAGR of up to 5 percent in the coming years. The key end-use application industries include coal mining and metal mining. While metal mining accounts for 39 percent, coal mining accounts for 40 percent. The underground mining equipment market is mainly going to be driven by certain APAC regions such as India, China, and Australia. The market will also be driven by Africa and the LATAM regions in the next few years because the demand for UGME from these regions is expected to increase.

The high maturity regions in the UGME market include Asia, North America, and Australia. The medium and low market maturity regions include South America, Europe, and Africa. The buyer has low to medium negotiation power while the supplier has medium to high negotiation power. The construction activity is expected to increase in the future and so the metal demand will also increase. This can lead to an increase in metal prices. There are two impactful cost components; labor and HRC steel. HRC steel accounts for 40 percent to 50 percent while labor accounts for 20 percent to 25 percent.

The top global suppliers in the underground mining equipment market are Caterpillar, Sany, Sandvik, Joy Global, and Atlas Copco. In Brazil, Africa, and Australia, iron ore exploration is the reason for the increase in market demand. An increase in mineral and gas exploration and infrastructure development will help the UGME market growth. This will be witnessed in regions such as Australia, China, and India. Underground mining will increase because of the lower ore grades in open cast mines. This will help push the growth of the UGME market. Mine mechanization will also help the growth of the market.

North America’s market size is over $2 billion while the market size of the Middle East – Asia is nearly $7 billion. The market size of the Asia Pacific is more than $11.5 billion. The global metals output is predicted to increase by up to 4 percent and this will help the growth of the UGME market. The underground mining of metals such as zinc, copper, iron, and nickel ore will lead to an increase in the demand of the market. The supply contract tenure is anywhere between five and seven years in the underground mining equipment market. The price depends on two factors; the demand and the raw material price.

The underground mining supplies will also see a change in the coming years due to capacity additions and other production-related changes. Experts predict that the demand for underground equipment can be found by focusing on commodity prices. When commodity prices change, it can indicate mining activities which can then reveal the demand of the mining equipment market. For instance, the mining activities increased because of an increase in raw material demand after the recession. After that, there was a decrease in demand which meant a lower demand for mining equipment. Experts are predicting that the demand will increase in the future.