US acetic prices rise as production returns to normal

The average annual savings achieved in Acetic Acid category is 6.50%

The industry average payment terms in Acetic Acid category for the current quarter is 70.4 days

The global acetic acid market has been growing at a CAGR of 4 percent since 2017 and is expected to continue with the same rate until 2022.

The momentum for growth rate of the acetic acid market is majorly supported by the demand in Asia, which is expected to grow at 5-6 percent owing to the anticipated growth in VAM and PTA segments.

A major part of the supply share of the global acetic acid market comes from Asia, i.e. 70 percent, followed by North America and EU, which hold 16 and 6 per cent of the market respectively.

New methanol capacities in Asia will further improve the acetic acid operating rates. Besides, imports from the Middle East will be diverted to Europe from Asia.

Some of the major names among the global suppliers of acetic acid are Celanese Corp., BP Chemicals, Jiangsu Sopo Group, Chang Chun Petrochemical, and Eastman Chemicals.

In the largest acetic acid supply market in Asia, the spot and contract price movements are set by the spot price movements of methanol. In North America, demand dynamics set the acetic acid price trends. In Europe, acetic prices are set based on methanol contract prices. For the assessment of contract prices, consumers of more than 10-100 KMT/ year are considered. On the other hand, transactions for cargos of 1-2 KMT/year are considered for spot price assessments.

The global acetic acid capacity reached 17.8 MMT/year when CPDC's Kaohsiung acetic acid plant of 160 KMT/year was shut down permanently in 2015. The operating rates witnessed significant lows, but are expected to go above 95 percent levels by 2021 as the demand is growing faster than the minimal capacity demands. The plans for 4MMT/ year will receive the support from Celanese in the US and Assam Petrochemicals Ltd in India. Over the coming years, the demand growth looks promising considering the PET sector in Asia. 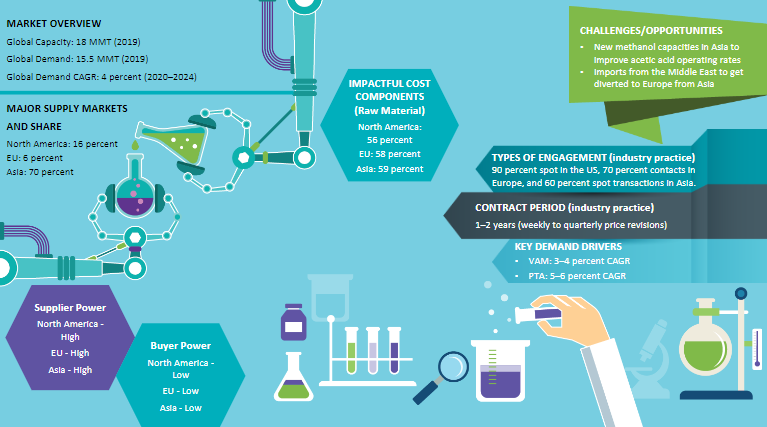 The acetic acid market is moderately fragmented, with 40 active and 13 idle suppliers across the globe. The world’s largest capacity is of 1,400 KMT/year installed in China by Jiangsu Sopo Group. The US acetic acid prices witnessed a decreasing trend during Q4 2018, due to downtrend in upstream methanol prices. European acetic acid prices witnessed a decreasing trend during that quarter. Acetic acid prices eventually increased as supply was constrained due to plant shutdowns in China. The anticipation of a grim outlook in natural gas prices in the Americas is expected to favor ethanol production at a significantly lesser cost that, in turn, protects the margins of acetic acid producers. End-use segment growth and market transparency at every node of the value chain are the industry-drivers.

This report gives insight into best industry practices, acetic acid demand and supply trends, imports, exports, and regional market outlook. It provides an overview of the industry drivers and constraints and Porter’s five forces analysis of North America, Asia, and Europe. The report provides insight into major industry events and innovations. It outlines the acetic acid cost structure analysis and acetic acid market price forecast. It gives an exhaustive suppliers list and does a SWOT analysis of major players like Jiangsu Sopo Group, BP Chemicals, Chang Chun Petrochemical Co., Ltd., etc. The acetic acid market report will help businesses get a complete picture of the market. This will be a valuable tool in decision making.