AI-powered self-service platform for all your sourcing decision needs across 1,600+ categories llike Pork.

Rabobank predicts a new cycle in the Chinese pork market

The average annual savings achieved in Pork category is 5.30%

The industry average payment terms in Pork category for the current quarter is 75.6 days

Find the right-fit pork supplier for your specific business needs and filter by location, industry, category, revenue, certifications, and more on Beroe LiVE.Ai™.

Q1 and early Q2 witnessed a sharp decline in North American pork processing capacity due to COVID-19 pandemic. Pork processing speed was reduced due to closing of processors to prevent disease transmission.

However, early June witnessed US pork processing rebound to near 2019 levels. 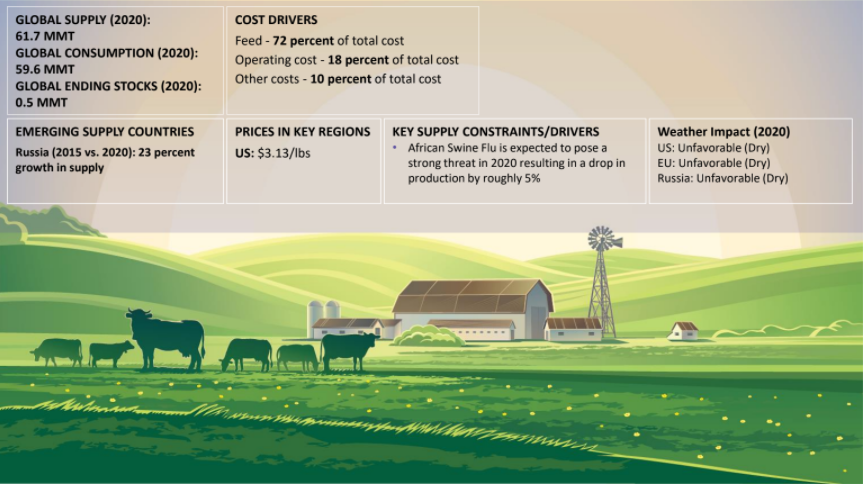 Pork market depends on the demand from recovering markets, like Brazil, since the consumption levels in China are likely to reduce in 2018.

Pork production relies on the global consumption levels. Pork demand in China is likely to reduce in FY 2018, due to a shift in demand for beef and poultry, since the increase in the per capita income.

Procuring from US, EU or Russia is feasible since the production levels are high. Prices in EU are lower with regard to exports, owing to the abundance in supply.

Pork is majorly produced and in China, due to the increasing trend for consuming a healthy diet. Major pork by product are also located in China, since the Chinese are not picky and use almost all parts of the pig or hog for consumption purposes.

Exports to China likely to rise in the short term, due to the sudden surge in demand for pork and processed pork products.

About 1–2% decrease in the production of pork in 2018 is expected, since the consumption is likely to decrease, due to a shift in the demand to other meat products.

Abundance in supply for export and comparatively low prices make EU one of the best sourcing destinations for pork.

No major growth or decrease is expected in production or consumption in the year 2018.