Global edible nuts market, a USD 40 Billion industry, driven majorly by the expensive tree nuts like almonds, cashewnuts, hazelnuts etc, and voluminous nuts like peanuts. Growing awareness of nutrient content of various edible nuts and their contribution to the quality of diet is likely to be the major driver for the edible nuts market. 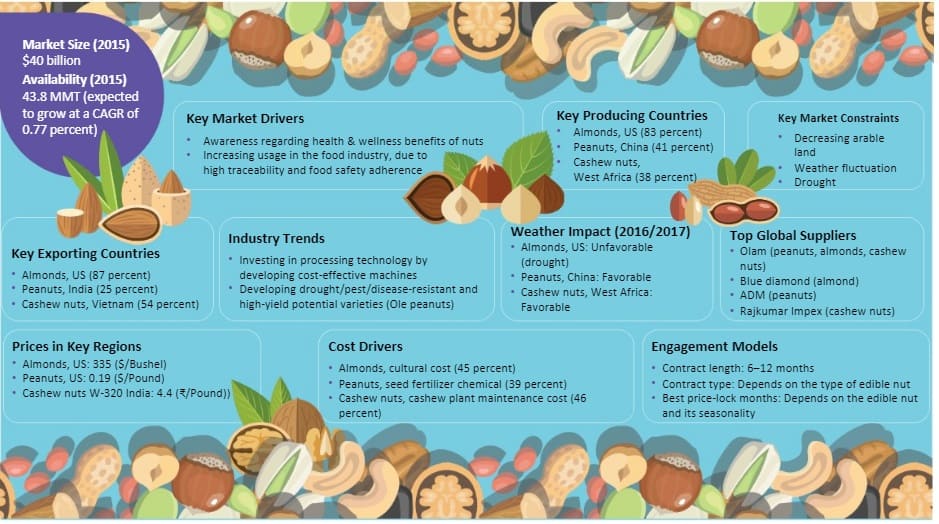 The major driving force of the edible nuts market is the increasing demand, due to its health & wellness factors, whereas, the major constraint would be the unpredictable weather in the producing regions.

Increasing application in the food and beverage industry

The global almond market is estimated to reach 1.28 MMT by 2017/2018 at a CAGR of 4.7 percent. Despite drought and water shortage, which are likely to affect the yield in major producing regions, like California, supply is expected to increase, due to increase in acreage

Drought and bad weather continue to be a cause of concern for the US farmers. Underlying threat of fungus infestation continues to persist and is likely to effect the production levels. Buyers can focus on Australia as a possible alternative to avoid supply chain risks, caused due to dependency on a single destination