The average annual savings achieved in Castor Oil category is 4.60%

The industry average payment terms in Castor Oil category for the current quarter is 30.0 days

The major sourcing destinations for castor oil are India, China, and Brazil, with India being the major contributor accounting for about 90 percent of the global production of castor oil.

Higher production and transportation costs have led to a low margin for suppliers while putting the market in an unattractive position for domestic manufacturers.

Over the years, the castor oil supply has been observed to consecutively decline due to the shift in cultivation to more remunerative crops in India.

The demand for castor seeds is expected to witness a drastic increase with the increase in the application of end-use industries of castor oil and its derivatives.

As per Beroe's industry analysis reports, the castor oil market prices were expected to soar during the mentioned period due to the huge gap in the supply-demand curve.

Due to the fall in castor oil prices, world imports have been reported to increase by 14 percent during the 2015-16 period and by 6 percent during the 2016-17 period. The lower prices also led to a significant drop in the cultivation of the crop in India, Brazil, China, and other countries.

Although Latin America is among the top supplying regions of castor oil in the world, it loses its competitiveness with India because its domestic consumption exceeds the supply.

Brazil is the major castor seed-producing country in Latin America, and it has seen a production decline of over 35 percent in the forecast period.

The global castor oil market is valued at $1.5 billion in 2019, and it will grow at a CAGR of 3.7 percent by 2024.•The APAC region is dominating the castor oil market and it is likely to drive the market growth in the forecasted period 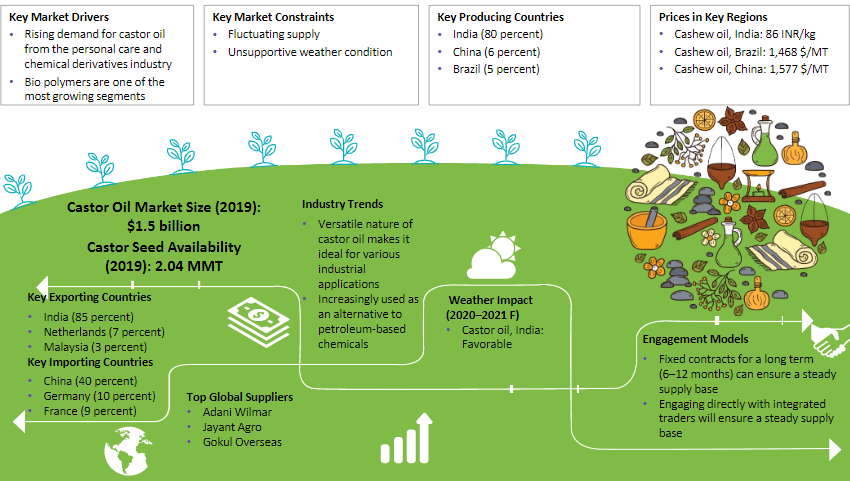 Castor oil prices are expected to soar in 2017–2018, owing to the huge gap in the supply-demand curve, however, the import market is expected to stagnate this season. Castor oil supply declined by 7 percent and beyond this year, as a reflection of drastic price slumps over 2015–2016. World imports have been observed to be increasing from 2015 by 14 percent in 2015–2016 and 6 percent in 2016–2017, due to a fall in prices. Lower prices for castor oil in 2015–2016, due to excess supply, reflected in a huge drop in the crop cultivation of 2016–2017 in India, Brazil, China, and other countries. The increasing trend in global consumption of castor oil in the import market has come to a halt this year at 690 Thd T, owing to excess stocks accumulated with higher purchases in 2015–2017

This section of the report gives details of the global castor oil market share. Castor oil prices and availability are driven by various global factors that are detailed in this section of the report. Any standout past trends in the market demand are described. It details the castor oil production market share by the major producing countries.  The global supply-demand analysis is presented graphically along with the castor oil market forecast. Global trade volumes, as well as the country-wise import and export statistics, are listed.

In spite of being one of the major supplying regions, Latin America loses its competitiveness with India, as the region's domestic consumption exceeds the supply.Castor seed production growth targets in Brazil, the key producing country in Latin America, has not been accomplished in 2016–2017 and has declined beyond 35 percent this year.Latin America currently contributes to approx. 25 Thd T of castor oil supply, the world's largest supplier in 1970–1980s. Imports surged in 2016–2017 beyond 50 percent to meet the raising demand in the region.Production in Brazil for castor seed and oil has been curbed over the years, owing to several factors, as in poor yields/ha, higher production costs, and transportation costs.Financial assistance from the government to promote castor cultivation for use of castor oil in the biodiesel industry has been terminated, owing to the high cost of cultivation. This has further decreased the attractiveness for castor in Brazil.