Malt Barley is used to produce beer through fermentation of sugars present in them. The production also includes hops, adjuncts and yeast.

AI-powered self-service platform for all your sourcing decision needs across 1,600+ categories llike Barley .

The average annual savings achieved in Barley category is 5.30%

The industry average payment terms in Barley category for the current quarter is 75.6 days

Find the right-fit barley supplier for your specific business needs and filter by location, industry, category, revenue, certifications, and more on Beroe LiVE.Ai™.

As per the report, Turkey and Australia are the emerging supply countries that observed a whopping 26% and 13% increase respectively.

The ideal contract length that prevails in the barley market is 2.5 ' 3 years. The benchmark prices are decided as per CBOT and Wheat MATIF Euronext.

According to Beroe's analysis, the E.U. region is the most unfavorable for the production of barley as its climate is a little wet. However, unlike the E.U., regions like Russia and Canada are considered favorable for barley production.

As per the barley markets report by Beroe, the largest regional malting capacity split is being held by the E.U. with a nearly 45% share. It is followed by Asia, North America, South America, and Russia with 28%, 12%, 8%, and 8% shares respectively.

The bulk global demand for barley is likely to change in the coming years due to a decline in the acreage of barley cultivation due to the availability of cheaper alternatives like Soy and Corn. 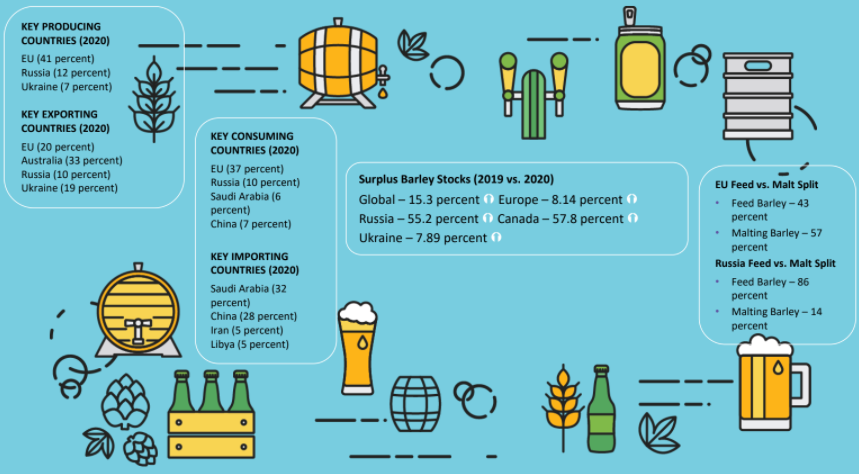 The total global production of barley in over the last four years has increased by 12 percent, while consumption for the same period has climbed by 12.4 percent, driven mainly by feed and beer industries

The consumption from Europe and Russia involve for both feed and food while countries, such as Saudi Arabia use only for feed purpose. China also uses majorly for beer manufacturing purpose, as their primary feed come from corn, which is much cheaper

Europe is the largest producer and consumer of barley. However, their major export variety is feed and they domestically consume 80–90 percent of the malt barley, which is used to produce beer. Russia and Ukraine together account majorly for feed-type barley, which is primarily exported to Saudi Arabia and China.