AI-powered self-service platform for all your sourcing decision needs across 1,600+ categories llike Ammonia.

Europe ammonia prices to increase due to supply crunch

The average annual savings achieved in Ammonia category is 20.00%

The industry average payment terms in Ammonia category for the current quarter is 75.0 days

Find the right-fit ammonia supplier for your specific business needs and filter by location, industry, category, revenue, certifications, and more on Beroe LiVE.Ai™.

Beroe's ammonia market outlook identifies certain key trends such as the demand from Asia rising at a rate of 3-4% as a result of increased demand from the agricultural sector and the non-fertiliser sector accounting for around 13% of the total ammonia market share.

The key drivers of the global ammonia market are considered to be capacity additions, primarily in the US which is expected to increase the global supply in 2-3 years. This may also lead to an increase in ammonia availability in the export market. The Asian and US markets are expected to see a major demand since they house most of the derivative units. Although the US has remained a leading importer in the previous decade, this year onwards it may be different. Moreover, the fertilizer sector is expected to drive a major part of the demand for ammonia.

Key drivers of demand for ammonia 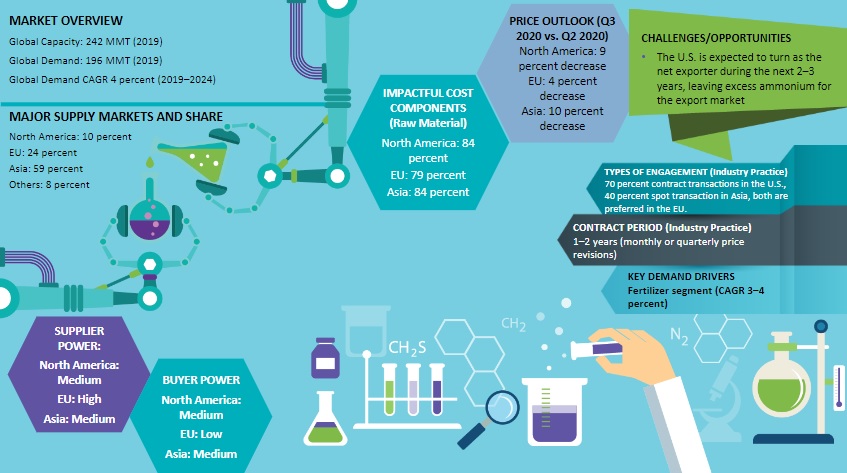 The global capacity of ammonia is 239 MMT in 2017 while the global demand is lesser at 189 MMT in 2017. However, there is an expected increase in demand in the future. Experts in the field predict there to be an increase in demand of about 234 MMT by the end of 2022. The CAGR of ammonia demand will be more than 5.2 percent. It is vital to understand the production size as it gives a full picture of the capacities in various regions for the ammonia market. In North America, the production size is 24 MMT while in Europe the production size is much higher at 56 MMT. Numerous global suppliers of ammonia exist. Some of the top suppliers include Yara, Nutrien, CF Industries, GS Caltex, and Terra.

The end-user industries of ammonia and ammonia liquor/aqueous ammonia include pharmaceutical products, agriculture, mining, and textiles among others.  Ammonia is also used as a cleaning product and in the manufacture of products for sanitizing. According to the experts, the NPK/NP fertilizer contributes to the rise in the demand for ammonia and this will most likely continue in the future. This is particularly true in developing regions as they will have a higher demand for ammonia in the next few years. This is due to the increase in population in developing regions which will increase demand in sectors such as mining and agriculture. It is critical to note that more than 10 percent of the global consumption of ammonia is from the non-fertilizer sector. All ammonia that is produced is not traded. In fact, only 12 percent of it is traded while the rest is converted to fertilizers that are nitrogen-based.

The US is moving towards capacity additions that will have a major impact on the ammonia market. Experts predict that the global supply will improve within the next few years. This will continue till the end of 2022 according to experts. The US presently imports more than 3.5 MMT of ammonia. It is the largest region to import ammonia. It used to import ammonia from Trinidad and Tobago. However, it has planned capacity additions of more than 5 MMT based on shale gas. This means there will be a big
reduction in imports from that region in the US. 30 percent of ammonia that the US market produces is exported by Canada. As there is a trade route in these regions, trading is expected to improve further.

In the EU region, Russia will have an excess of ammonia as before. That is, Russia always had excess ammonia. Russia generally has surplus ammonia of more than 4 MMT. This excess production can help keep the ammonia prices stable in the future among other factors. In Asia, India imports ammonia from the Middle East and this can continue in the future until capacity additions are completed in various regions of Asia. Globally, 10 MMT of capacity additions is expected specifically of fertilizer production. This is because of the expected growth of up to 4 percent growth in the fertilizer market. Ammonia is required in the industrial sector too which is expected to grow in the region. The expected growth of this region is anywhere between 3 percent and 4 percent.

Ammonia Market Forecast: Ammonia markets in Asia and the US will remain frontrunners over the forecast period. The reason behind this is that both of them are planning derivative units. These derivative units include industrial usage, fertilizer, and direct application of ammonia. The US is going to turn into an exporter rather than a major importer because the production is going to increase rapidly in this region. In fact, it is going to turn into a net exporter in the next few years because it will meet its own demand and leave enough that can get exported to other regions in the world.

The ammonia price is likely to become stable because of capacity additions taking place at the moment. Numerous capacity additions are planned for the future too which can stabilize the ammonia commodity price in the market as there won’t be as much pressure on it. This is because of the excess ammonia that will be available globally as production will increase manifold across the globe. For example, regions such as Asia, the US, and Russia have many plants that are nearly completed which means an increase in ammonia production can be expected soon. These are integrated plants and standalone ones that are being focused on to ensure ammonia supply can meet the expected increase in ammonia demand.