Cleanroom Gowning and Work Apparel US

Buyers can look at bundled services to reduce costs, as FM companies are increasingly offering security as a bundled service by combining it with other services.The Security Services industry in Australia has recorded a revenue of approximately AUD 6.2 billion in 2016. It has grown at a rate of 1.3 percent annually from 2012 through to 2018. 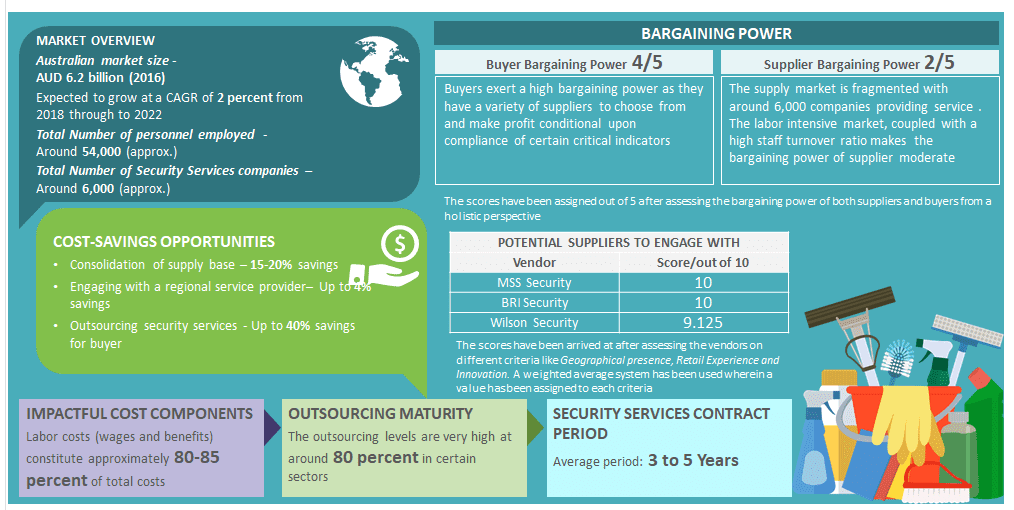 Security as a Service:

The upcoming convergence of physical and logical security is an absolute certainty, which is already in progress. For example, Role-Based Access Control (RBAC) has been the predominant model for access control in the IT world of logical security and today this architecture is reflected in the design of leading access control systems, because it significantly reduces the cost of access management

Shift from Proprietary to Open Hardware:

Security dealers and integrators have started to manufacture hardware that are compatible with third party operable software. This is mainly because of the issues customers had faced in the past, due to the manufacturer's negligence in updating the software or discontinued operations. Customers feel guaranteed with the invention of these open hardware, which can also be run on other third party operating software (apart from OEM).

The security industry has started to develop video analytics software that works in a similar way to software that analyzes numerical and text data. Instead of having a person work through video footage, the software can work in real time to help make quick and informed decisions. This would help professionals address several challenges such as facial recognition, forensic analysis and perimeter protection.

Integration of various security systems in an organization have been the trend for quite some time and now the cloud storage is being utilized to achieve maximum operational efficiency through integration. This not only integrates the security systems in an organization, but also provides the user a remote access to the security network, which could be used in techniques such as intrusion prevention which is different from intrusion detection.