labour |Solution to shortage of Skilled Workers|Labour Shortage in Europe 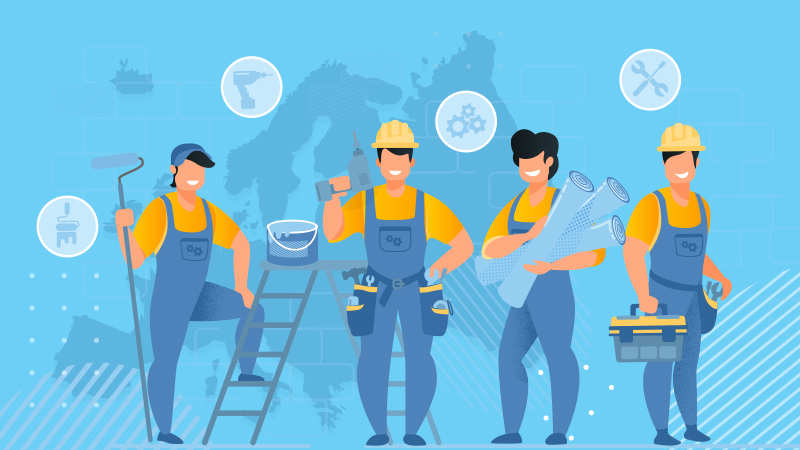 The staffing industry is undergoing a major transformation due to labour and talent migration in European countries along with an aging workforce and the retirement of baby boomers. The year 2017 recorded a total of 258 million international migrants, representing 3.4 percent of the global population. Work and better economic opportunities are considered to be major reasons for migration to foreign high-income countries and mainly engaging in the services sector.

Migrants contribute immensely to sustainable economic growth and development in both home and host countries. While economies benefit from the rising number of migrants, the process entails challenges with respect to governance, migrant workers’ protection and rights, migration and development linkages, and international cooperation.

The major reason for the acceptance of migrant workers by organizations is to overcome severe labour market shortages, an aging workforce, and the retirement of baby boomers, which has been observed globally. Companies are finding it difficult to fill job roles in lower and mid-level skill jobs. Organizations have started to increasingly depend on migrant and flexible workforces (temporary labour, gig economy, independent contractors, statement of work professionals, etc.).

Solution to Labour Shortage across Europe

European countries are facing major setbacks in growth for being unable to fill job roles in organizations. This is due to increased digitization, AI, and machine learning. Global companies are implementing regional strategies to overcome the problem of shortages and an aging workforce, such as:

These approaches are beneficial to companies that hire migrants or foreign workers from non-EU countries for their survival in the European region. However, the cost of hiring a migrant worker could be higher when compared to alternatives—a trend that has been widely observed as the best practice by many global organizations.

However, before, we explain the solution to our problem, we would like to highlight how labour/talent migration is prevalent in European countries.

Please note that we define labour migration as a voluntary act of moving from home to host country for economic opportunities.

Labour migration flow in the region of Europe—2018

The effect of migration flows on jobs and wages is particularly topical as Europe faces a slow recovery and considerable unemployment, especially among its youth. Moreover, high unemployment rates are linked to labour shortages, relating to a mismatch of DD-SS of the labour market. Migration can play a role in reducing these shortages and partially compensate for insufficient intra-EU mobility.

However, we have observed a decrease in the number of migrants in 2019 via the Mediterranean route (i.e., a dip of 56.5 percent from the previous year, 2018, over the same period—from January to June).

EU Countries that Depend On Migrant Workers

Germany is considered to be among the major countries hiring migrant workers in significant numbers. As the country has observed economic growth after a decade, unemployment is at its lowest, and job vacancies at their highest. As almost two-thirds of firms complain about the lack of skilled labour, German employers have cautiously started to hire foreign workers. Sectors like manufacturing, financial services, and others are facing a labour crunch despite Germany’s modest wage growth.

Croatia is facing a severe labour shortage, leading to lower economic growth. The major concerns are inadequate levels of pay, education, and lack of skills-training due to which potential labour is migrating to Western EU countries for lucrative work. As a result, employers find it extremely difficult to find suitable employees, which has negatively impacted the labour market in Croatia. The most severely affected industries are manufacturing, retail, construction, and tourism.

Hungary is also experiencing labour shortages, especially in administrative, service support, manufacturing, trading, and building sectors. The shortage is more severe with each quarter. Ukrainian, Romanian, and Serbian migrants are welcomed in the country due to higher wages as compared to their home countries. However, Hungarian labour is migrating, and due to aging population, emigration has increased, and in turn, there is less flexibility around working hours and contract types. Employees want higher wages, which is more favourable in other EU states.

Companies hire foreign/migrant workers to achieve the following advantages, which in turn, benefits the host country.

Labour migration poses specific challenges for buyers and employers concerned with their rights in supply chain and workforce. When companies do not address the rights of a migrant workforce, it can lead to several risks and challenges.

The ICT industry is at the threshold of driving global innovation, labour productivity, and growth. As ICT and the Internet become pervasive, the need for a mobile, skilled workforce in this area becomes essential.

ICT companies operate in an increasingly globalized environment, often with globally-based clients. Such clients need quick and efficient support, meaning that local, highly-skilled ICT professionals will always be preferred. This is not only due to time pressures, but also due to the cost factor. When such local expertise is unavailable, ICT companies will want to move their highly-skilled professionals to where the problem occurs and thus require sensible immigration policies that can facilitate this strategy.

-          A major US software vendor developed and installed a sophisticated supply-chain management system at a Spanish consumer-goods company with warehouses across Europe.

When deployed at each facility, the software application would expedite the delivery of materials along the supply chain, reduce the need for inventory, and result in savings of thousands of euros per day. However, a few weeks before the system was due for live testing, problems arose.

Preliminary testing of the application could not begin before the issue was resolved. As the software application was developed in the U.S., technical expertise was U.S.-based. Software engineers had to be brought in as soon as possible to resolve the issue at each of the client’s warehouses and to remain on-site to ensure no additional problems arose in the weeks leading up to and immediately following deployment. To access each warehouse situated in different member-states across the EU, however, a separate visa application was required. The time taken to process each application resulted in major delays in deploying the system, costing the Spanish consumer thousands of Euros.

-          A US software company needed to bring skilled ICT professionals to France to work at the site of a prominent client.

The visa applications were denied—ICT professionals were limited to working at the software company’s office and not at the client site. Such a policy is detrimental to both the ICT company, which cannot service its client’s needs, and the highly reputed French company that cannot have its ICT problems fixed.

Organizations should initiate discussions with immigration departments to ensure that they receive support in special scenarios when there is a requirement for highly-skilled workforce to be on-site. The discussions could include a legal support team and immigration support organisations to negotiate for:

Will the BREXIT Wave Impact Labour Migration in Other EU Countries?

The BREXIT wave will not impact the labour migration in other EU countries considering that, as per EU law, member countries are bound by mutual free movement of labour. Under current proposals for a post-Brexit UK immigration system, EU nationals would need to qualify for work permits based on their skills and be deemed ‘low-skilled’ or ‘high-skilled’. Low-skilled workers would be eligible for temporary permits, either two or three years in length; however, they would not be eligible for residency. High-skilled workers would be eligible for five-year work permits and could eventually apply for residency.

Results of the UK’s withdrawal agreement and any mobility provisions will significantly impact European companies as they choose where to locate their businesses, how best to access global talent, and how to move people most efficiently throughout their mainland and UK operations.

Companies must thoroughly prepare before hiring a foreign migrant workforce in light of associated strict rules and regulations. With global integration in workforce strategy, organizations need to take the following steps:

Companies should adhere to fundamental rights of migrant workers, immigration policies of EU member states, and specific country policies. HR policies should be in line with the migrant workers policy implemented by the government.

The trend is expected to continue in the future as European countries will face severe labour shortages. It has been observed that the global talent shortage could be as high as 85.2 million people, which will cost companies trillions of dollars in lost economic opportunities. Service-oriented industries such as manufacturing, financial services, telecommunications, retail, etc. will be worst affected by the crisis. These industries require a high volume of skilled workers—leading to a discrepancy in the demand and supply of labour.

Of late, migrant populations have constituted a major share of the labour force in regions in the EU. Between 2010 and 2017, migrant workers provided 50 percent of the labour force growth in the UK, 46 percent in Spain, and more than 47 percent in other world economies. This helps companies obtain an integrated workforce along with other types of contingent labour and permanent employees.

Companies will employ more migrant workers in the future to combat labour shortages in EU countries.