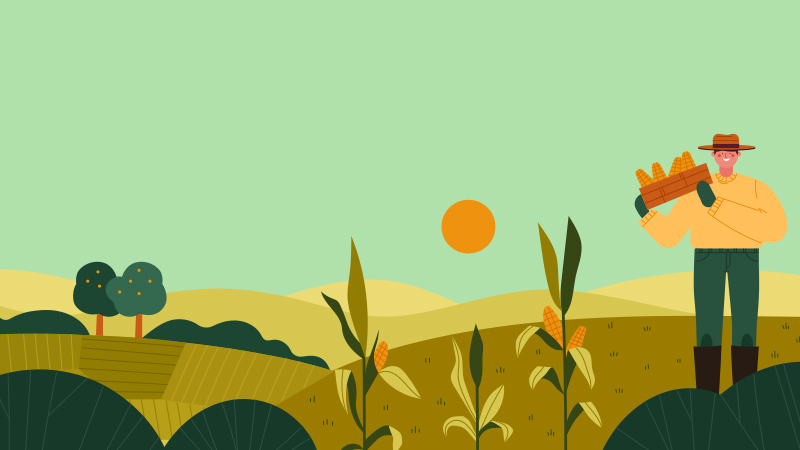 Brazil is a global agriculture powerhouse and its production of many agriculture commodities, including soybean, corn, sugar, coffee, wheat, beans, and meat, alters the supply and price equation. The country was caught off-guard as the Russia–Ukraine crisis went from a mere standoff to a full-blown military operation. The global agriculture business has been impacted by the crisis, with the supply of essential grains and oilseeds being choked and prices treading north. However, the domino effect of this crisis cannot be overlooked. Here we review the impact of the Ukrainian crisis on the fertilizer market, which is expected to influence the corn acreage in Brazil. 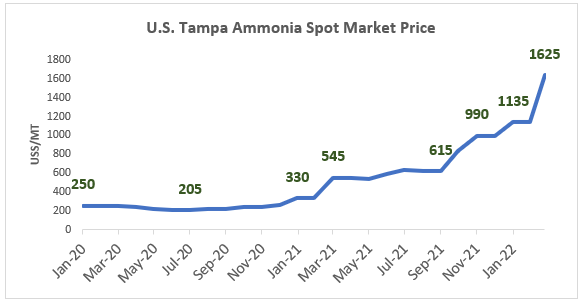 Brazil is the third largest corn producer in the world with an acreage share of nearly 10 percent and a production share of nearly 9 percent. The corn acreage is highly dependent on nitrogen fertilizers and the surge in the market prices can impact the crop sowing. The corn acreage in Brazil has been steadily increasing since 2018/19. In the 2021/22 crop season, the acreage is expected to increase by 5 percent, lower than the 8 percent rise in 2020/21. However, in the forthcoming season in 2022/23, we anticipate the corn acreage to pave the way for soybean, which requires less fertilizer input than the former. 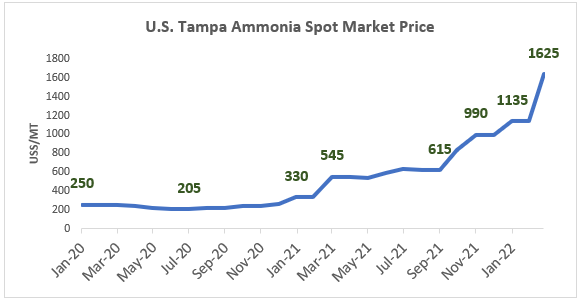 Globally, a higher fertilizer price was triggered by lower production in China, while the surge in the price of the phosphate fertilizers was driven by countervailing duties applied by the U.S. on the product imported from Morocco and Russia. However, with the Russia–Ukraine crisis spiraling into a major military action, the global nitrogen fertilizer prices skyrocketed. The reference gauge of nitrogen-based fertilizer in Tampa surged to $1,625/tonne on March 31, 2022—a 43 percent monthly increase. However, what is more astounding is the spike from nearly $250/tonne during early 2020 up to the current market price, almost 5.5 times. The spike in the market price is because of the rise in the natural gas price and the ongoing tensions in the Eurasian region. Moreover, the input price rise is forcing several manufacturers in Europe to reduce their output. The traders are also apprehensive of possible sanctions on Russia that could worsen the fertilizer shortage. 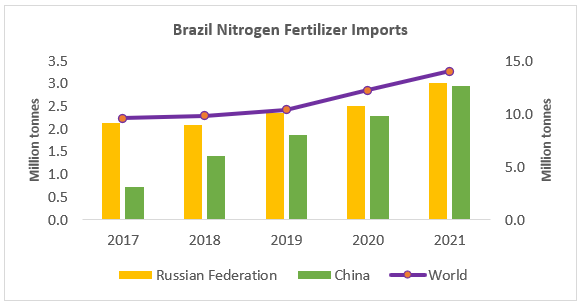 Out of the multiple reasons for the fertilizer price rise, we believe that the major trigger factors were the following:

Notably, Brazil imports a majority of its fertilizer requirement as it merely contributes 2 percent to the global fertilizer supply. The country imports 94 percent of potassium, 76 percent of nitrogen, and 55 percent of phosphorus used in crop production. Nitrogen-based fertilizers are widely used to boost corn yields across the country. 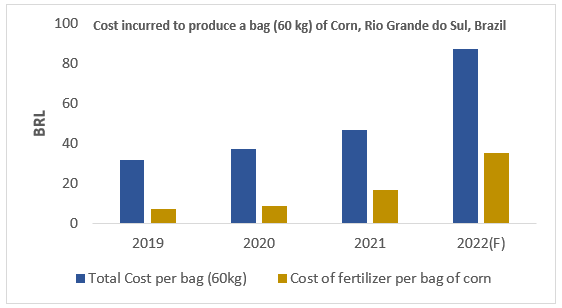 Fertilizer prices are projected to increase by nearly 102 percent for the Rio Grande do Sul corn crop in 2022, resulting in higher total costs per bag of corn harvested. We believe that this could erode the corn acreage in favor of soy crops in the region.

Undoubtedly, this is expected to affect corn prices as well. Currently, the Brazilian spot market corn price is BRL 76.8/bag (60 kg), which is expected to surge higher with a drop in acreage in Brazil as well as in the U.S. The increase in price and the supply crunch are also likely to impact the industries where corn is the primary feedstock. The second corn crop in Brazil might not be largely affected by the price rise as almost 80 percent of the fertilizer requirements have been already negotiated well in advance. However, the risk of delayed availability might impair the plantings. Still, the ministry expects a tepid rise in plantings for the second corn crop, although whether farmers will use the same amount of fertilizers as they usually employ in their cornfields remains to be assessed. If the required fertilizer is not available at a fair price, Brazilian farmers will likely reduce, even forgo, using fertilizer. Failure to apply fertilizer at the right time for corn planting can reduce the volume and quality of the country’s grain harvest. However, lower yields can be offset by lower costs, balancing the producer’s profit. Skyrocketing fertilizer prices will significantly increase the cost of the corn crop in Brazil.

Based on the prospective plantings for the second crop of 2021/2022, and the first crop of 2022/2023, we anticipate a drop in the acreage in 2022-23. The competing soybean crop is expected to provide fair remuneration to the farmers as edible oil prices have also skyrocketed. We anticipate the acreage to remain at 18.3 million hectares in 2022-23, a projected 12 percent decline y/y. Meanwhile, the market is also cautious of any sanctions that might impede the crop prospects and forward purchase commitments of fertilizers by Brazilian traders.

The worrisome rise in fertilizer costs is exacerbated by the drought conditions in Brazil, which could also affect the second corn crop sown in January 2022. While the soil moisture conditions are expected to improve, higher fertilizer costs will also reduce the cash flow and affect the husbandry practices in the field.

Mobility Package and its Implications on Europe Road Freight Cost