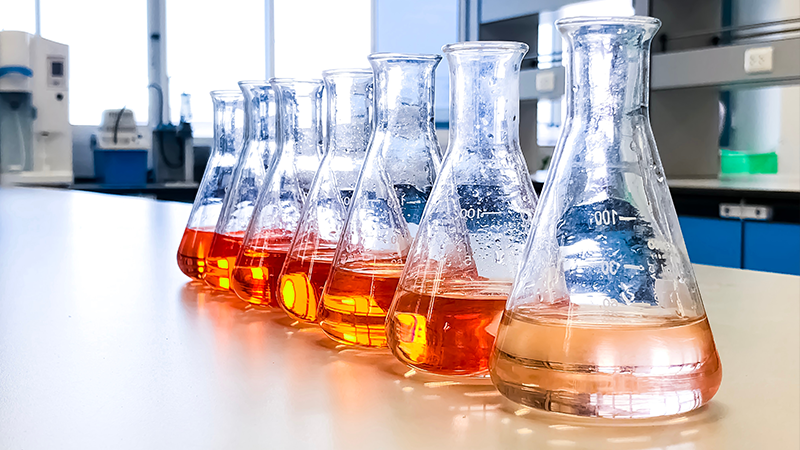 Over the last decade, the rapid pace of development in the Chinese chemical industry was faster in China compared to other countries. This development has its pros, such as a rise in Gross Domestic Product (GDP), employment, and export. However, it has seriously deteriorated the environmental standards, such as air and water quality. Due to a strong manufacturing growth, China has the most polluted cities in the world. Smog-related issues, heavy air pollution, and river contamination have got both domestic and global attention in the last two years.
With the situation worsening every winter, China has ratified its Environmental Protection Agency (EPA) efforts to curb the pollution. Previously, though the EPA rules were in place, the fines associated with non-compliance were minimal; and hence, suppliers preferred paying fines, if caught, rather than adhering to standards. This environmental overrun has happened for almost 20 years, now, leading China to face the consequences.
Previously, these cleanup endeavors were brief, and they were primarily event based. For example, during 2008 Beijing Olympics, 2010 Shanghai World Expo, and 2012 Hangzhou G-20 Economic Summit, such inspections and pollution crackdowns were witnessed. 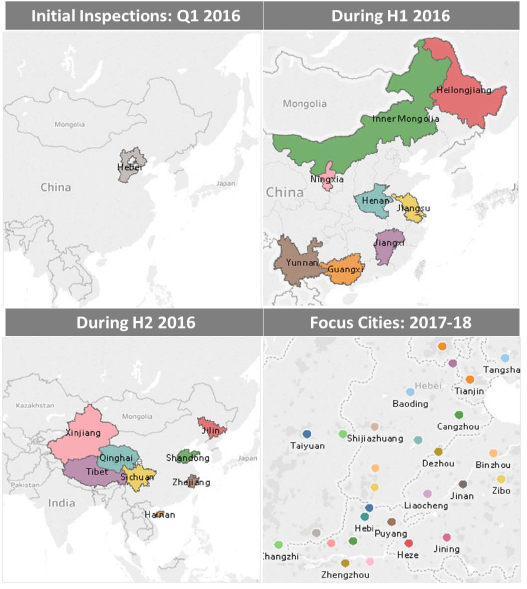 Impact caused so far, due to environmental regulations

I) There are few converters, who are importing containerboard from other Asian countries (India, Vietnam, etc.), to avoid loss. Buyers are also witnessed engaging in a similar practice to avoid high prices and further hikes.
II) Major end use of pulp in China was tissue, paper grades, and hygiene products. However, with import restrictions on recovered paper, the demand from the packaging sector is increasing significantly.

4. Scale and sector to be most impacted 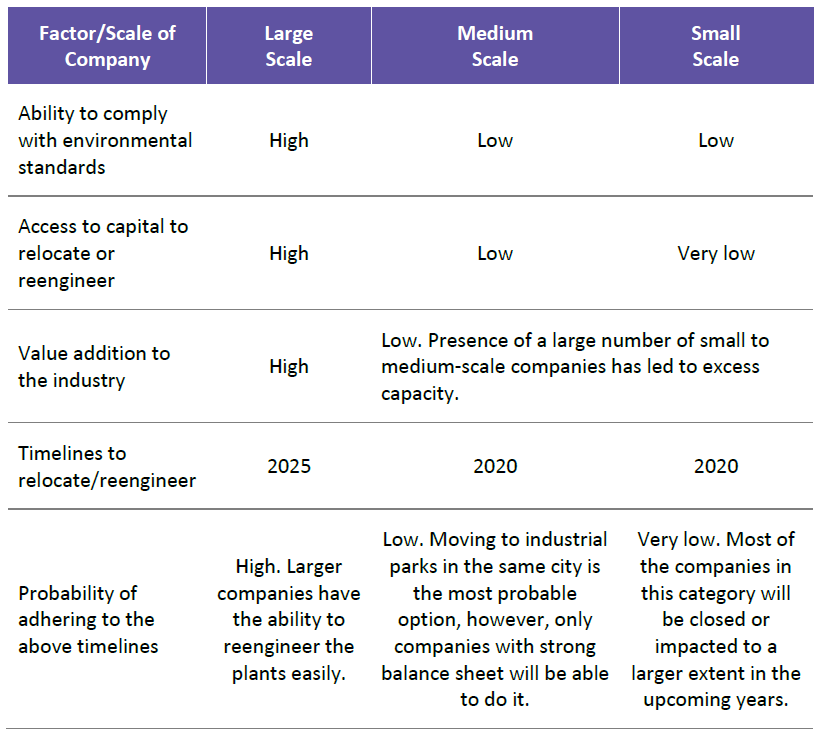 5. Developed provinces are the most impacted 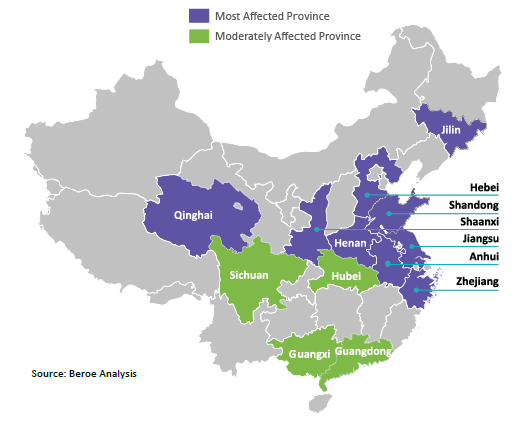 The environmental control activities actually began in 2015, but did not have any significant impact until 2016. In 2017, around 80,000 factories had been charged with breaching emission levels, with an estimate that 40% of China’s total manufacturing capacity temporarily shutdown, with factory closures lasting two to three weeks. Some of the plant closures, especially small-scale plants operating in oversupplied markets, which were struggling to maintain good economies of scale, were permanent. Hence, it is evident that China is using its environmental campaign to solve multiple problems at once.

Due to China’s aggressive economic growth policy in the past decade, there are a number of state-owned and small to medium-scale companies, operating in the chemicals industry, leading to an excess supply in some of the chemicals. This has led to a mix of low and high-quality products, with consecutive years of low prices. One such example is the surfactants industry in China.

Case 1: Surfactants Industry in China
Supply–demand gap of the global surfactant market for linear alkyl benzene/linear alkyl benzene sulfonate is about 1.1 Million Metric Ton (MMT) in 2016, and as per industry reports, there is a huge supply–demand gap of about 5.3 MMT in ethoxylates, as of 2016, of which about 3.5 MMT is contributed by Asia alone.
Surfactant is the second largest downstream market for Ethylene Oxide (EO). China’s EO capacity has grown from 0.4 MMT in 2005 to 4.23 MMT in 2016, leading to a capacity expansion of domestic players. In 2014 and 2015, nine domestic suppliers started Ethoxylation plants for the production of 730,000 MT of surfactants and eight suppliers started or completed construction of sulphonation plants, with a total capacity of over 550,000 MT.
China has about 500 domestic players in the surfactants market, who hold a slightly greater share compared to 30 foreign surfactant manufacturers. This leads to a huge difference in material quality and pricing between foreign and domestic players. For example, in the cationic surfactants segment, the average price from foreign suppliers is 1.7 times the average price from domestic suppliers.
Outlook: Consolidation of capacity by eliminating suppliers, who do not comply to environmental regulations 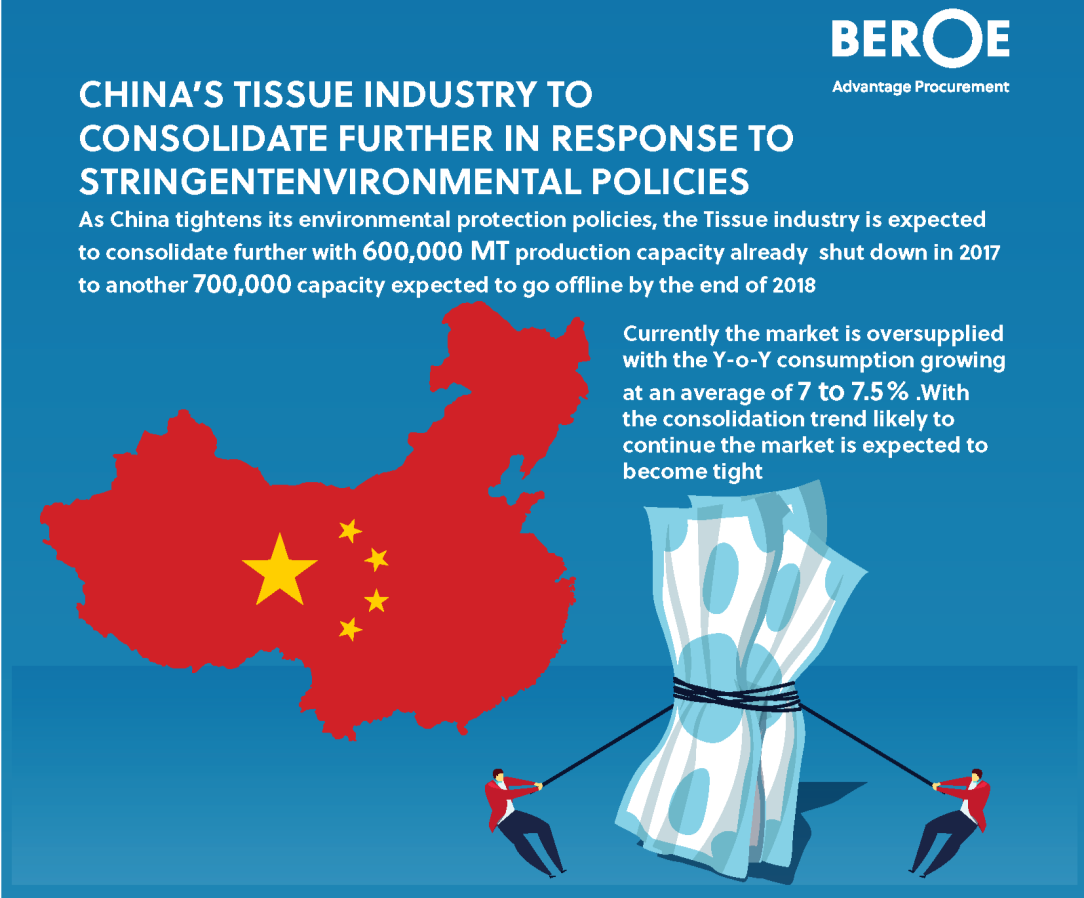 China’s debt has increased significantly over the past decade, mainly due to large-scale investment in manufacturing and real estate, post 2008, as China used debt to improve domestic growth to compensate for the global financial crisis. This credit boom led to a number of new companies, especially in the chemicals sector (1,171 state-owned enterprises for the manufacturing of raw chemical material and chemical products), leading to overcapacity with factories, producing an average of 20% more than the market demand in 2016.
China’s total debt amounted to 257.1% of its GDP in 2016, and the total credit growth averaged at a rate of about 20% Year-on-Year (Y-o-Y) between 2009 and 2015. The rate at which the debt is increasing Y-o-Y is more concerning than the amount of debt, especially the corporate debt. It is estimated that two-thirds of corporate debt is due to China's state-owned enterprises, many of which are unprofitable and inefficient.

China’s corporate sector’s Capital Output Ratio (ICOR) has increased more than threefold from 2009 to 2017. Hence, China is trying to reduce the overcapacity and consolidate the industry to control the spend. During 2017, China cuts 128 MMT of its total coal capacity and 42.4 MMT of its total steel capacity, reaching 85% of its annual reduction targets.
During 2016, China’s State-owned Assets Supervision and Administration Commission has identified around 345 companies, which are most likely to be shutdown in the next two years.

How is the chemical industry reacting?

Chinese chemical producers, especially small to medium scale, are left with less options, while large-scale companies are finding ways to defend their supply chain with minimum disruption. Below are some of the key trends observed in the response of stringent EPA actions over the past two years:
1. Relocating within China
a. The small to medium-scale players have to move to industrial parks, as directed by inspection authorities. However, the access to capital for relocation is limited for small to medium-scale players. Many factory owners are toward their retirement age, and they would rather consider scaling back/exiting this industry

2. Expanding supply footprint outside China
a. Companies sourcing raw material from different locations have started to enter into contracts with countries outside China, wherever the volume is available (without much deviation in pricing)

3. Getting audited
a. Companies having certification, like ISO 14001, are less likely to face any impact, due to EPA regulations. However, the company will face an impact, if the supply chain partners, such as raw material supplier and packaging partners, are not complaint:
i. Case: A ceramics consumer in the UK is facing supply disruption from its supplier in Zibo (Shandong province), as the ceramic factory is closed. Though, the ceramic industry is not a polluting industry, it involves certain paint and treatment processes, provided by tier-II and III suppliers, who may not comply with these laws

4. Reengineering
a. Reengineering activities, such as altering the plant/production process to reduce effluents and air pollutants discharge, have been the most sought approach to mitigate the risk of impact
b. Uncertainty over EPA directions: It is observed that directives from EPA authorities have been differing from case-to-case. For instance, a company operating in an oversupplied market, such as dyes, and a company operating under niche categories, such as organic pharma excipients, get different incentives and directives
c. Case: A tartaric acid producer, who used heavy pollutants, like coal-fired boiler, was instructed to replace it with gas boiler. Post installation, the company cleared off the regulations. This company was given incentives, in terms of time, in order to complete the replacement, whereas this is not the case with other companies using coal as a fuel 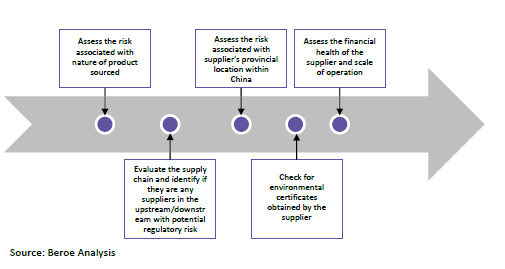 Assess the risk associated with nature of product sourced

Hazardous and polluting nature of the material should be thoroughly evaluated, in order to understand the level of regulatory risk. Production process involving heavy pollutants, such as coal, sulfur, and a few other chemicals, is at high risk.

Even if the direct material is not subjected to risk of regulatory actions, it is highly possible that a disruption may come from a tier-I or II feedstock, as evident from the recent cases. China has announced that it would completely ban the import of waste plastic, effective from January 1, 2019, as a part of the government's initiative to improve the environment of the country. Events like these would impact both the upstream and downstream risks associated with a commodity.

Assess the risk associated with supplier's provincial location within China

Supplier location within China has become increasingly crucial in supplier evaluation process. Environmental regulations are different from province-to-province and are highly possible for a supplier, being placed in a high risk province.
Cost of taxation and penalty involved with non-compliance to EPA standards vary across different provinces. Part of authority to determine tax and penalty is vested with the provincial authorities, which might significantly impact the procurement cost.

Check for environmental certificates obtained by the supplier

Audit certificates from third-party agencies, such as ISO 14001, might mitigate the risk of supply disruption/high cost of compliance. Few producers, who are inspected and approved by the Chinese EPA enforcement authority, or suppliers, who have done their Environmental Impact Assessment, are also safe to engage.
Companies with such audit processes in place, such as Shanghai-based BASF Advanced Chemicals Co., have been levied only with a minimal new environmental quarterly tax.

Assess the financial health of the supplier and scale of operation

As discussed about the looming debt crisis of China, it has become increasingly important to monitor the financial stability of the supplier. A small to medium-scale chemical producer, without EPA standards, operating in a surplus capacity market, with weak financials, has a higher probability of closure/suspension.

China wants to let-go and move up the ladder!

The policy changes and the government actions clearly indicate that China wants to clean up the manufacturing mess that has been created over the last decade. The economic fundamentals and overcapacity have clearly paved the path ahead for China. The country is willing to let-go the polluting and non-value-adding manufacturing industry capacity to other regions. Even if China tries to hold the current manufacturing capacity, it will be a burden in the next five years for industry profitability and looming debt crisis. Hence, actions taken so far as a part of environmental compliance are also aimed at restructuring various industries to have appropriate supply balance and step-up the industry standards. 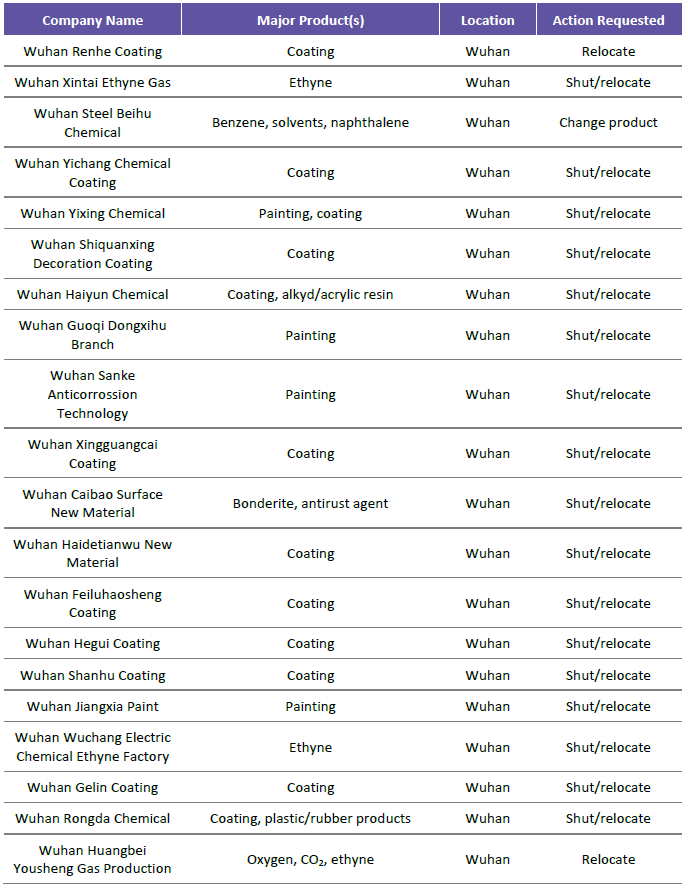 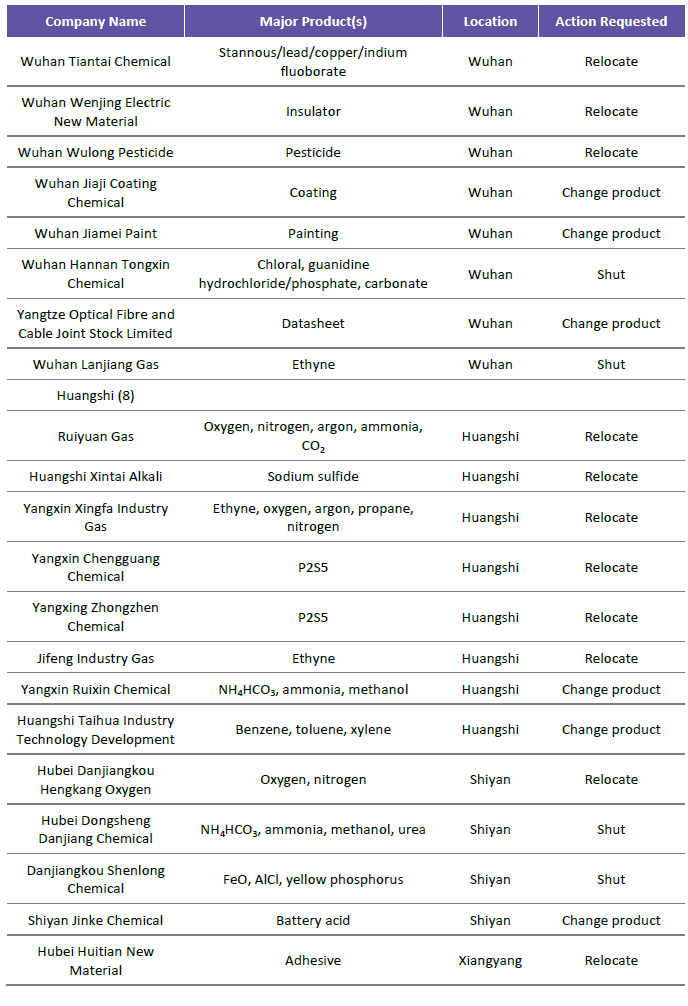 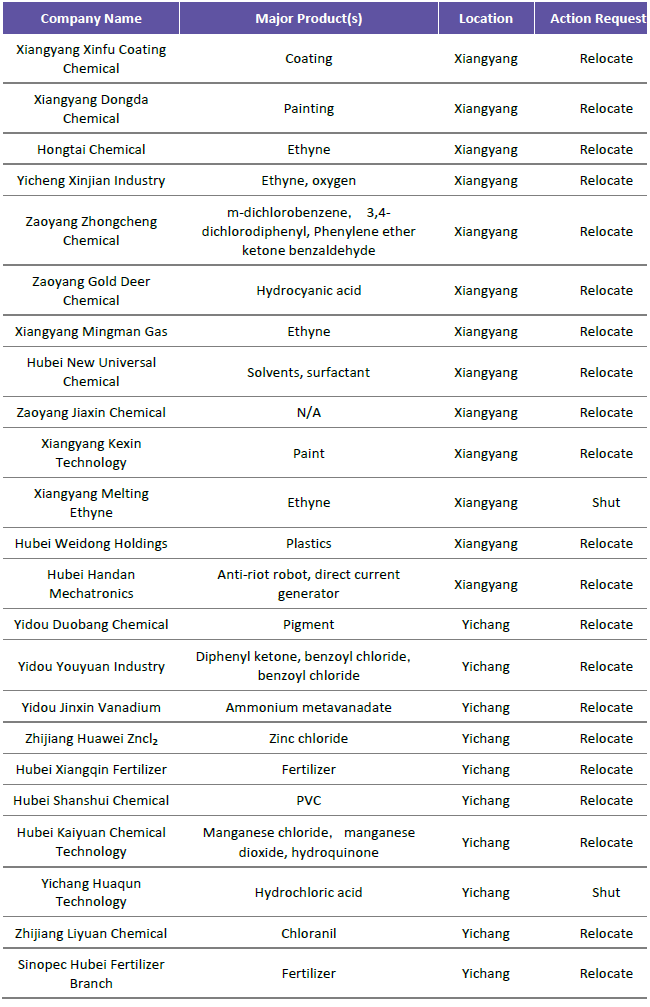 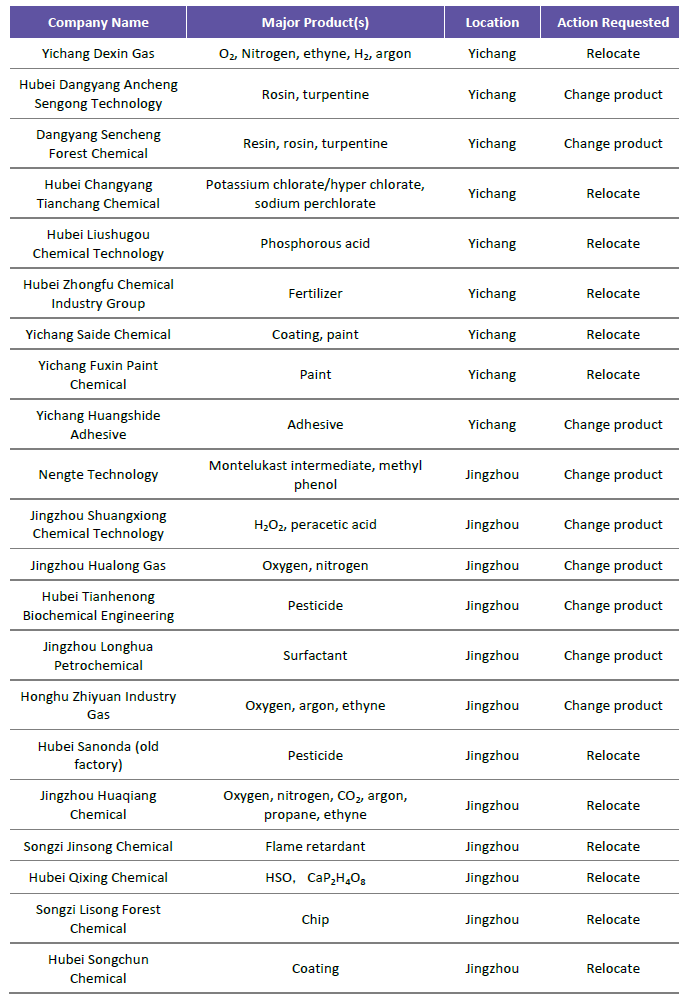 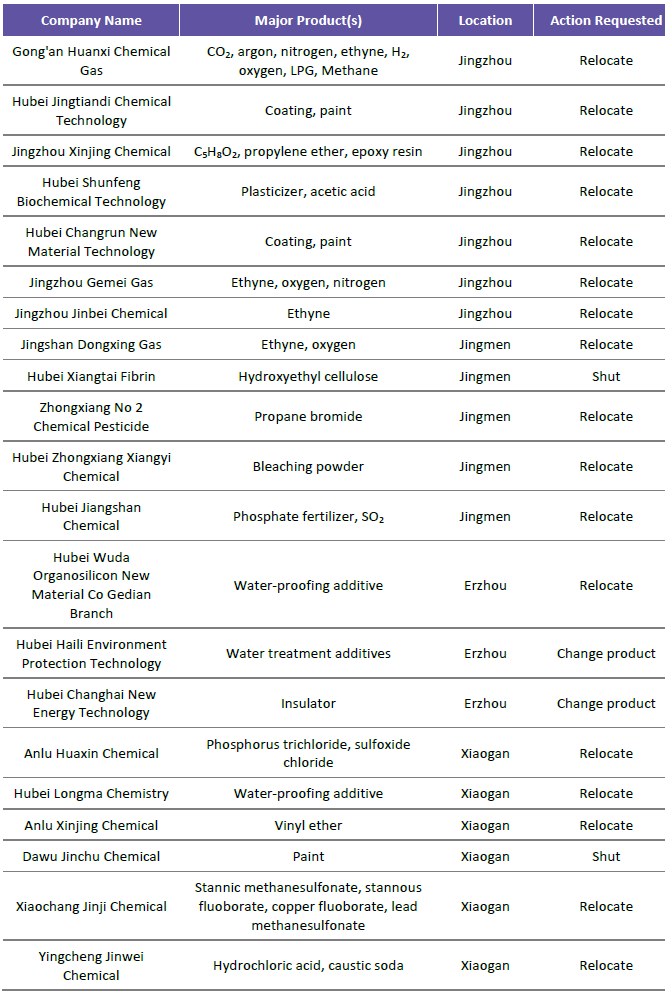 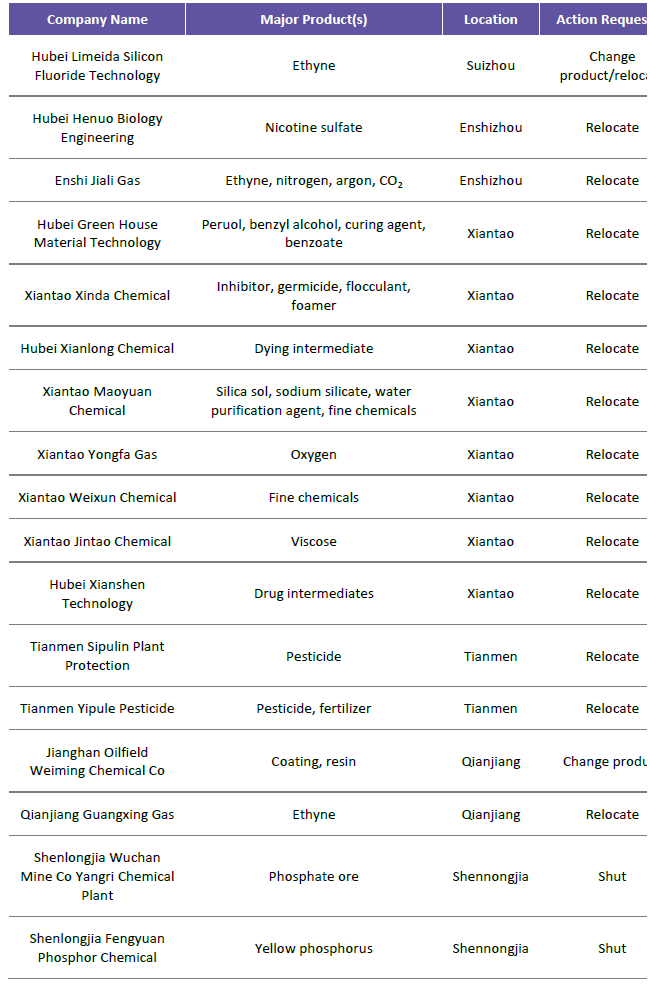 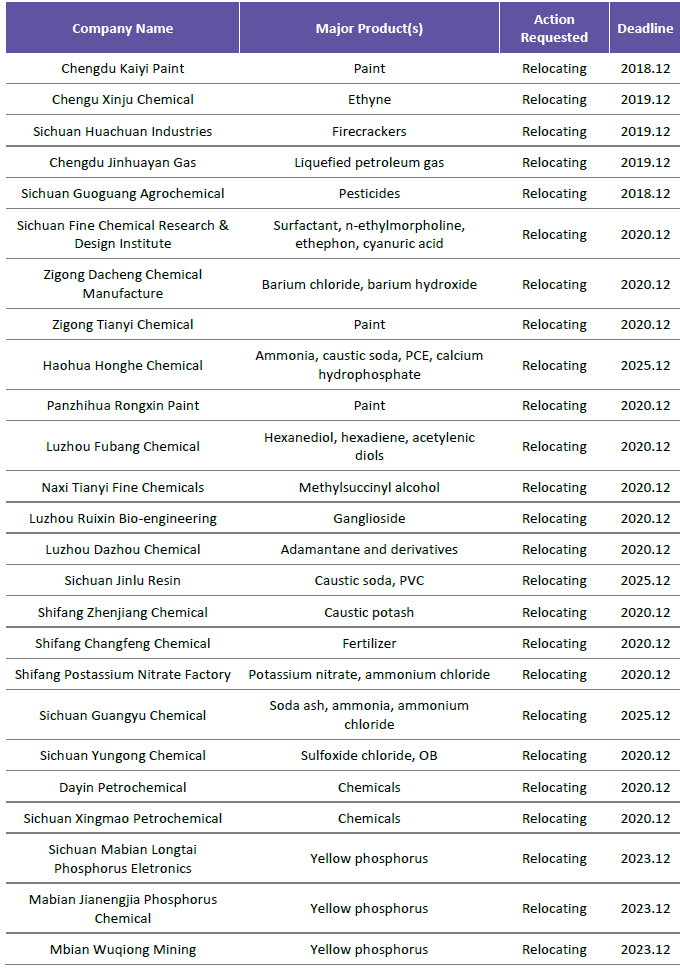 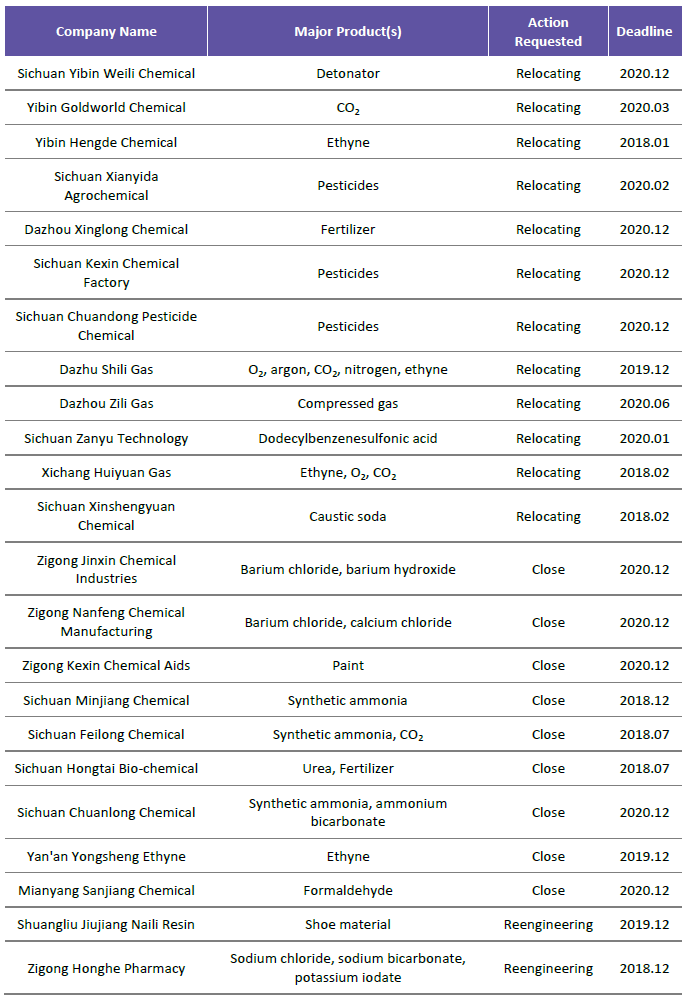 Heilongjiang province will close 14 chemical plants and relocate another five. 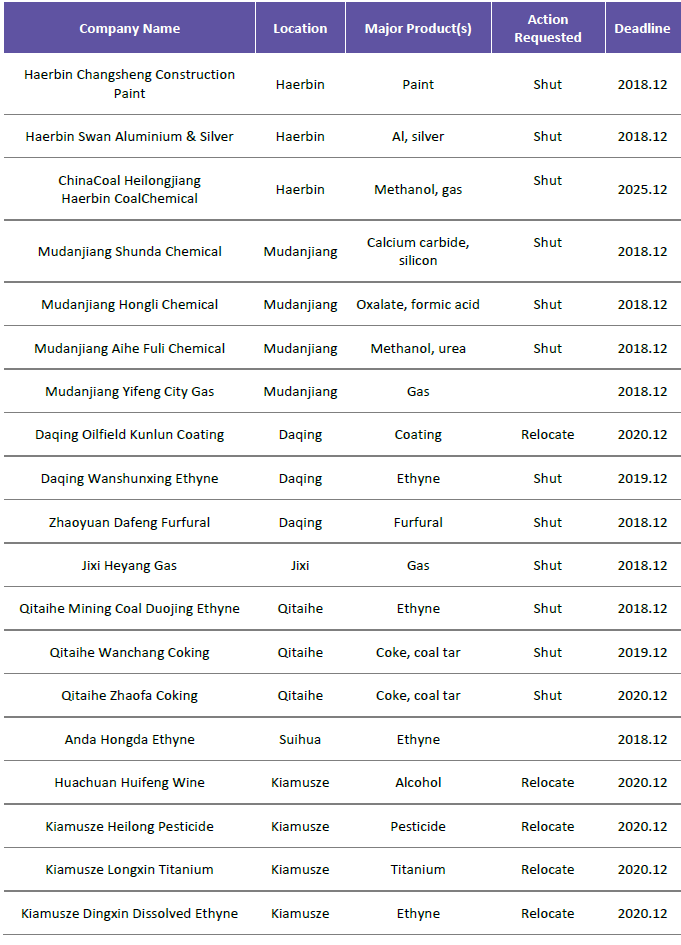 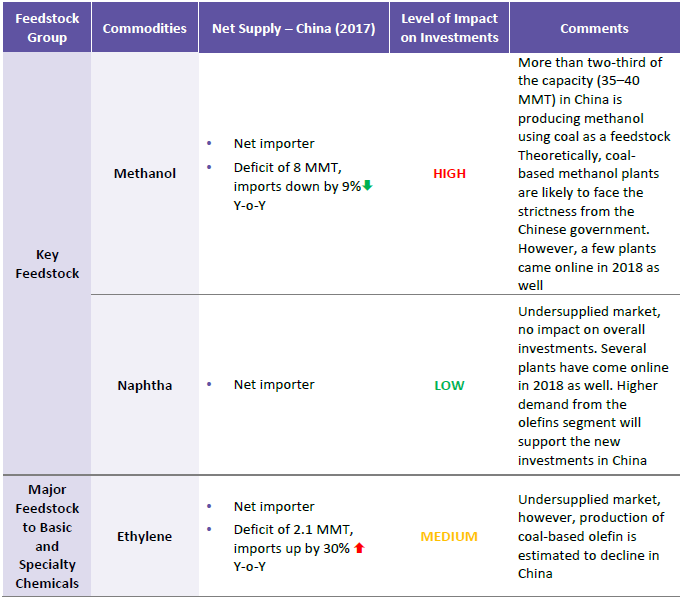 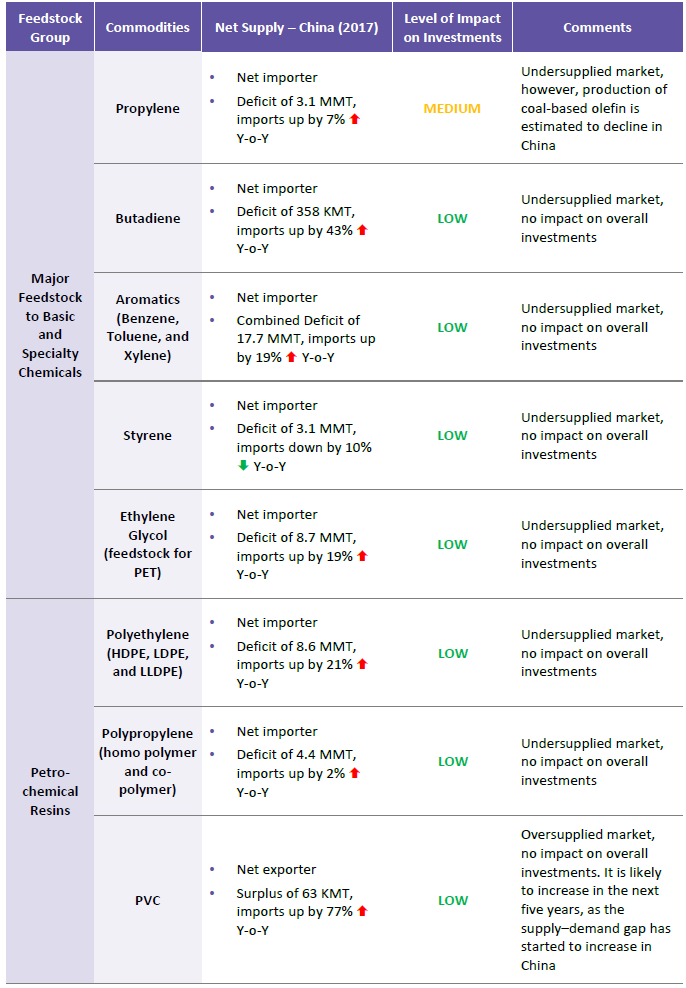 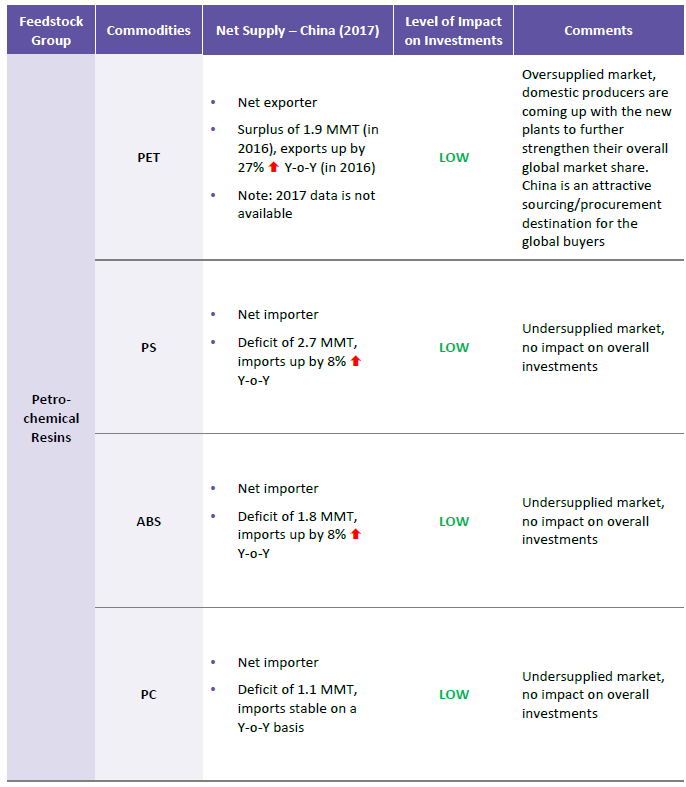