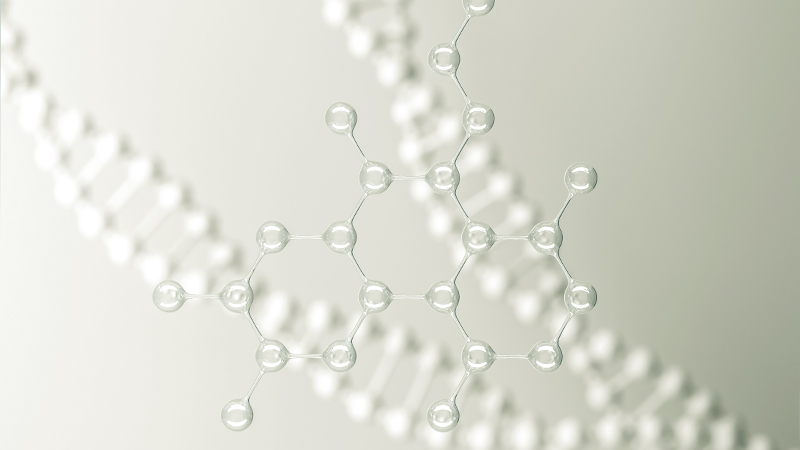 The small molecule synthetic API market is widespread in China. Other alternative markets, such as India, Europe, and the U.S., also depend on China for API and key starting materials. After the China–U.S. trade war and the COVID-19 pandemic, Chinese suppliers are being off-shored. India, Europe, and the U.S. are taking measures to reduce their reliance on China. The major alternate regions after China are India, Europe, and the U.S. In this whitepaper, the current dependency state of these regions toward China, measures taken to reduce the dependency, and current geopolitical risk in the alternate sourcing regions are captured, to choose the best sourcing region for synthetic API.

China is a major producer of API and an intermediate for synthetic API. The synthetic API manufacturing market is expected to grow with a CAGR of between 5 percent and 6 percent throughout the forecast period. China and India are major producers of API in the market, and India imports most of its key starting materials and APIs from China. Major pharmaceutical markets, such as the USA and Europe, also have synthetic API and DS manufacturing facilities. The U.S. accounts for approximately 34 percent of the market, and is one of the largest importers of synthetic API and intermediates. After the COVID-19 pandemic, the U.S., Europe, and India have taken measures to avoid reliance toward China. 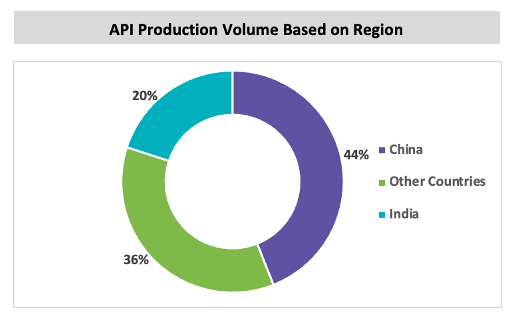 China is the largest manufacturer of chemical API in the market and exports API to 189 countries and regions in Asia, Europe, and North America.

The cost saving in this region is the main attracting factor for industries to source API and intermediates. China produces more than 2000 API molecules and has more than 1000 manufacturing facility. The Chinese government has supported many schemes to promote pharmaceutical API and raw material exports to other regions.

Pros of Sourcing synthetic API and raw materials from China

Cons of Sourcing synthetic API and raw materials from China 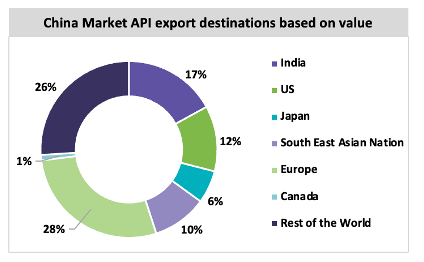 India is currently exporting around 19 percent of API by volume in the world, but raw materials and key starting materials are imported from China. India exports finished drug formulations and biologics globally, followed by bulk drugs, and intermediates. After the COVID-19 pandemic, the government has taken various measures to promote the domestic manufacturing of these raw materials to meet internal requirements and meet the global demand.

In FY21, India imported around INR 28,529 crores worth of major API bulk materials and intermediates, of which ~68 percent of these materials were imported from China. The quantity of such imports was approximately 3,90,475.7 metric tons. Paracetamol, citric acid, glycerol, potassium metabisulfite, sodium propyl paraben, and sodium benzoate are some of the major imports from China. Since 2019, the import volume in India has increased, and export volume has decreased. However, the export volume increased in 2020–21 compared to 2019–20. 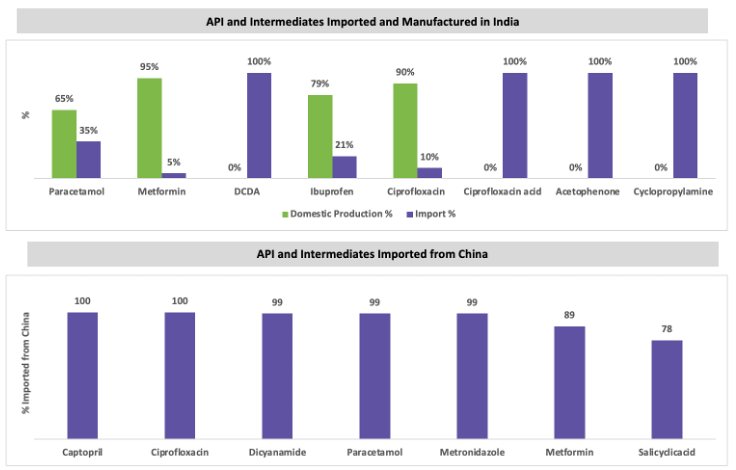 Measures Taken by India to Reduce the Dependency of China

There are many initiatives in the development stage to establish API manufacturing clusters, financial incentives to manufacturers, tax holidays, single-window environmental clearances, income tax benefits, liberalization of FDI policies, tax exemption, price monitoring, and custom duty imposition. Ramping up or reviving domestic production may take a while; hence, the government is also trying to diversify sourcing options and study other potential options in countries such as the U.S., Italy, and Singapore as short-term solutions. Government initiatives may attract many medium- and small-sized manufacturers to expand their businesses. Big pharma in India, such as Aurobindo Pharma, Dr. Reddy's, Lupin, and Sun Pharma, will benefit from this and can expand their capacity further. Other key API manufacturers, such as Divis Laboratories, Aarti drugs, Hikal, Neuland labs, and Solara, can also benefit from these schemes.

Based on current initiatives, India expects to cut 25 percent of API and raw material reliance by 2024.

The European synthetic API market is expected to grow, with a CAGR between 5 percent and 6 percent throughout the forecast period. Italy and Spain are the largest producers of generic API in Europe. The European market is subject to stringent environmental regulations, and the quality of the API is high; hence, the price of the API produced in Europe is high. Italy has a greater number of API manufacturing sites than other European countries. In 2019, around 2.8 million tons of API was exported from Europe to other regions, in which around 62.3 percent of the API volume was distributed across 27 countries in Europe. Around 51.9 percent of API are produced within Europe, and the market is dependent on China and India, some of the major API molecules. In 2019, Europe imported 51.9 percent of the API volume within Europe Union countries, 4.2 percent from the UK, and 1.5 percent from Switzerland. Around 3.5 million tons of API are imported in Europe, of which 22.5 percent of API volume is imported from China and 3.2 percent from India. Italy is a highly regulated market for API and exports 25.5 percent to other countries in Europe, 49.7 percent to North America, and 15.3 percent to Japan.

Measures Taken by Europe to Reduce the China Dependency

The European Union is taking strategic steps toward self-reliance after the China–U.S. trade war and the COVID-19 outbreak. The EU is a major supply base for high-quality, custom, patented, and innovative API. The major players in Europe can initiate further capacity expansion for large-volume generic API to reduce API dependency in China. The European Union, comprising 27 countries, is making decisions to reduce the dependency toward China in strategic areas such as raw materials, pharmaceutical ingredients, and semiconductors.

The major focus for EU countries is diversifying their supply base, diversifying demand by relying on different trading partners whenever possible, and stockpiling. The EU could create a pool resource for Important Projects of Common European Interest (IPCEIs) in fields such as hydrogen, low-carbon industries, pharmaceuticals, and the semiconductor industry. Major innovator API CMOs are concentrated in Europe, followed by the U.S.

With the strategic goals in place, the EU is expected to become self-reliant in the API market in the long-term.

Sanofi launched a spin-off company called Euro-API, which could lead to improved supply security. The Euro-API is a combination of Sanofi’s six API European production sites. 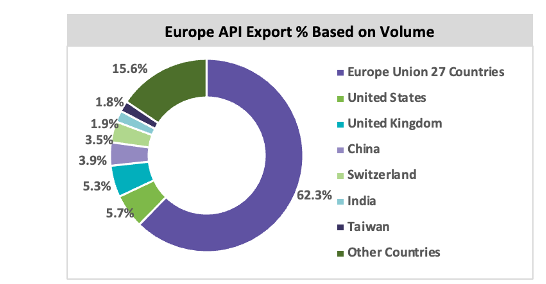 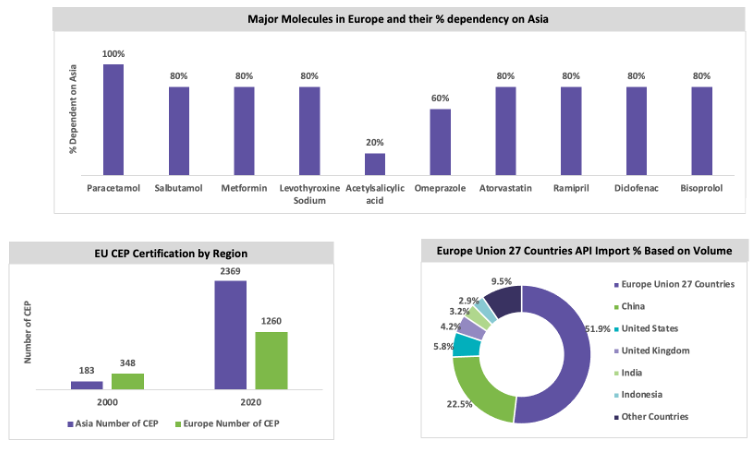 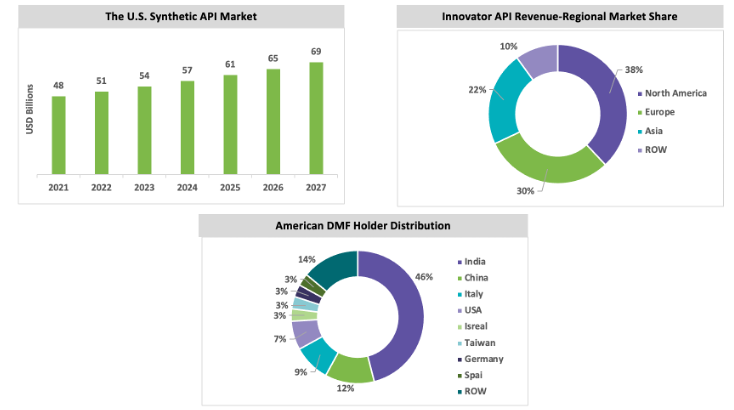 Measures Taken by U.S. to Reduce the Dependency of China

After the global COVID-19 pandemic outbreak and the U.S.–China trade war, many countries dependent on China initiated off-shoring from Chinese suppliers. The small-molecule synthetic API supply market is dominated by China, after which India has the next largest market for synthetic API. India is also dependent on many APIs and KSMs; hence, complete removal of Chinese suppliers from the value chain is difficult. Various regions and countries are taking measures to reduce dependency on China for API and key starting materials. The major alternate regions to China are India, Europe, and the U.S. All three regions are taking measures to reduce their reliance on China for synthetic API and key starting materials.