Indian acetone market is currently import-driven with major imports coming from Taiwan, South Korea, Thailand and Singapore. Demand for acetone is on an upward trend and is likely to continue increasing till 2022 mainly driven by the automobile and the construction sector.

The ongoing reduction of Chinese imports and the lack of viable alternative markets in Asia would mean that the surplus Asian volumes are anticipated to increasingly find their way to India.

This white paper aims to address the key import opportunities from Saudi Arabia in terms of sourcing acetone and also to provide an outlook of price comparison between Saudi Arabia and the current sourcing destinations.

The Indian acetone market, currently estimated at 180.5 thousand MT, is expected to grow at a rate of around 11.0 percent till 2022. This demand is fuelled mainly from the downstream end use in the pharmaceutical, paint and cosmetic industries accounting for more than 80 percent of acetone consumption in India.

India currently has only two domestic players catering to 30 percent of the regional demand and the rest 70 percent is met through imports from Taiwan, Singapore, Thailand and South Korea.

The Government initiative “Smart Cities Mission”, whose main goal is to make 109 cities in India citizen-friendly and sustainable by modernizing the existing mid-sized cities, is anticipated to boost the demand for acetone in the construction and automobile industry. The growth of smart cities and increase in migration of people from tier 3 to tier 2 and from tier 2 to tier 1 cities has boosted the demand for houses. , Also, spending on cars is likely to go up by 12 percent per year over the next 15-20 years. This is likely to boost car manufacturing in India thereby creating a need for acetone.

If such a scenario does happen the CAGR can shoot up to an optimistic 13-14 percent until 2022 as well. This clearly indicates the vast requirement of acetone required to meet the growing demand. However, India’s domestic market consists of only two players with a combined capacity of 44.6 thousand MT (2017) and an expected third player likely to come online in mid-2018 with a capacity of 120 thousand MT. 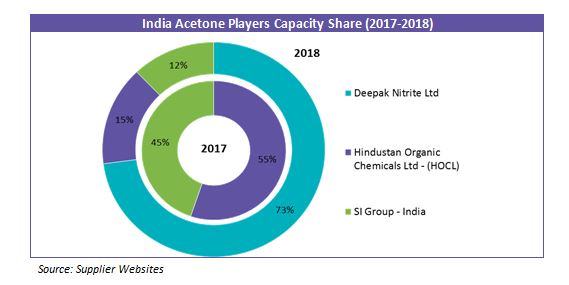 However, anti-dumping duties (ADDs) have been levied on most of these countries to discourage dumping acetone into India. Countries such as Thailand and Japan have their ADDs wavered off recently. However, South Korea, Singapore and Taiwan still have ADDs imposed on them.

PTT Phenol Co. Ltd. has two plants producing around 309 thousand MT of acetone in Thailand. The country is a net exporter of acetone with major exports to Belgium, Taiwan, South Korea and the U.S.  Thailand’s contribution to China’s import of acetone is close to 24 thousand tons which is around 6 percent. So even if China stops importing from Thailand, it will not be sufficient to cater to India’s growing demand despite the prices being cheaper. 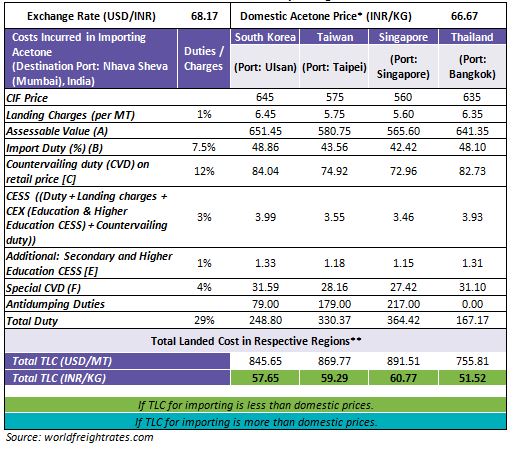 Based on the above calculations, importing acetone works out to be a much better alternative especially after the ADDs on Thailand have been wavered off.

However, with the limitations on the quantity that Thailand could export to India coupled with increasing demand for acetone, Indian acetone procurement can look for new and cheaper avenues.

The domestic demand for acetone was around 19 thousand MT in 2016 and it is anticipated to grow between rates of 2-3 percent till 2022. In addition, Petro-Rabigh is set to start its 160 thousand MT plant in by 2017-2018, bringing Saudi Arabia’s total installed capacity to 295 thousand MT.

However, with China on the verge of becoming self-sufficient in acetone production, Saudi Arabia, like other Asian countries would be keen on looking for other regions for exporting acetone. 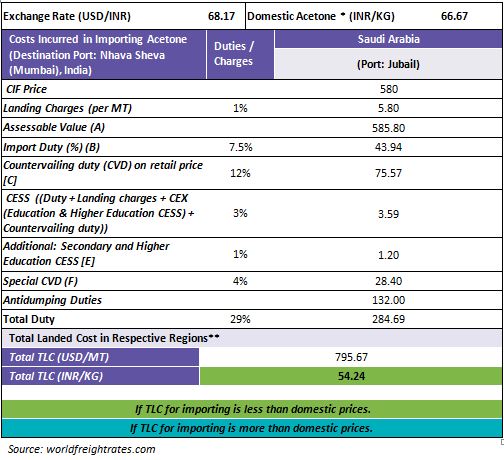 From the above calculation, it can be concluded that importing acetone from Saudi Arabia proves to be a cheaper sourcing alternative.

Indian buyers could likely tap into this market as it would be comparatively cheaper compared to the current acetone sourcing destinations. 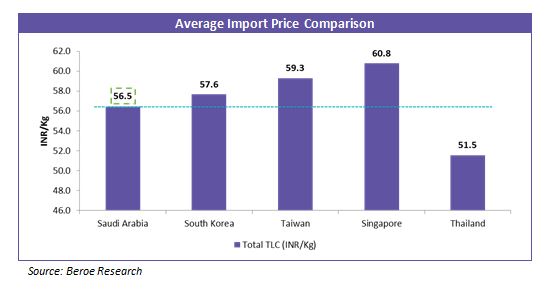 In addition to the cost of imports being cheaper from Saudi Arabia, the transit time to India is also lesser compared to most of the Asian countries. 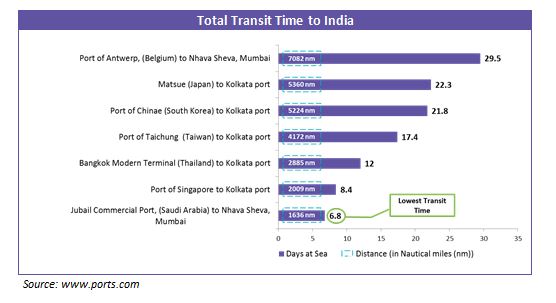 Demand for acetone in the Indian market is likely to witness a surge soon with increasing demand from the downstream sectors of construction and automobile. With the vision of smart cities in motion, procuring cheaper acetone into India would be a top priority.

With options already available to procure acetone from South-East Asia, Saudi Arabia looks to be a more favorable option for India to procure acetone in the future due to lower cost of production and lesser transit time when compared to other Asian countries such as Taiwan, South Korea, Singapore and Thailand.

In addition to this, Saudi Arabia’s new capacity addition in the form of Petro-Rabigh’s 160 thousand MT acetone plant by 2017-2018 is further expected to increase the supply availability of acetone in Saudi Arabia, thereby presenting it as a potential sourcing market for acetone procurement for Indian buyers.