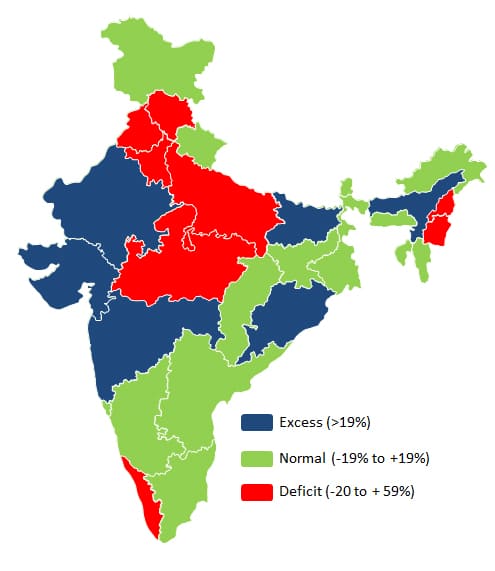 In April, the Indian Meteorological Department (IMD), the national weather agency, said in its first seasonal update that India is likely to receive “normal” quantum of monsoon rains and the precipitation is likely to be about 96 percent of the Long Period Average (LPA). The rains were less than normal in 2016 and it was necessary for the country to receive plentiful rains this crop season to alleviate agrarian distress.

However, rainfall during the just concluded South West monsoon season was 95 percent percent of long period average (LPA), which would be considered as “below normal”.

Rainfall was at normal to surplus levels in June and July, but the monsoon weakened in August and early September, before a brief late rally.

Due to flooding in certain areas and shortage in others, sowing is reported to be lower for food grains and oilseeds than last year.

Kharif crop production is also projected to be lower than last year.

The deficit rainfall in Kerala state, known for its lush-green landscape, is projected to reduce the Cardamom production nearly by 30 percent from last year estimates. India is the second largest producer.

Despite higher acreage compared to last year, Guar seed production is also expected to be affected due to excessive rains in growing states like Gujarat and Rajasthan which damaged the crop.

Pulses output is estimated at 8.71 MMT, which is a 7.5 percent decline from the previous year. This is attributed to erratic rains as well as due to farmers shifting to more lucrative crops such as sugarcane and cotton.

India is the top ranked producer of pulses as well as guar seed.