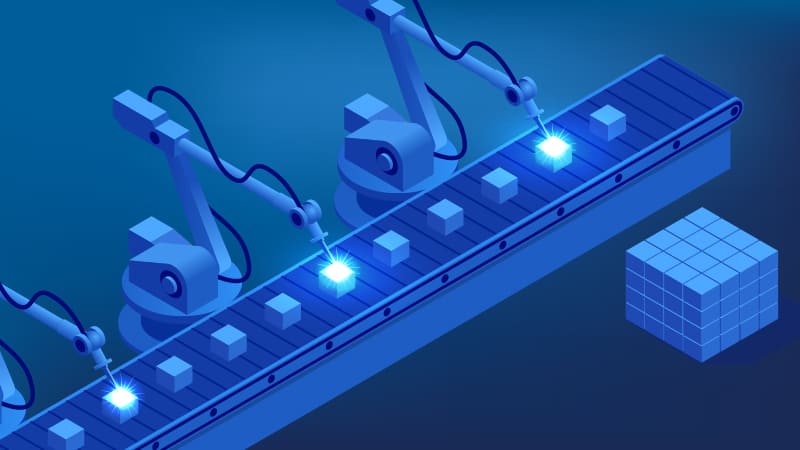 Since their advent around the industrial revolution, robots have replaced risky human labor and complex factory jobs. As a result, companies have experienced a major boost in their production volume by automating tasks and finishing production schedules well ahead of time. Despite offering a multitude of advantages, industrial robots were unable to guarantee a collaborative nature where they could be used safely alongside human workers. As a result, collaborative robots, or cobots, have been developed by the industry. Such cobots take away some of the environmental and spatial dangers traditional robots may cause, allowing them to work alongside humans. Their interaction with humans is more natural, they share the same workspace, and cobots are very easily reprogrammed.

Cobots are defined as robots that are capable of learning multiple tasks in order to assist human beings, by working safely alongside them. Cobots exhibit many important features including smaller scale, affordability, and flexibility. These robots offer the benefits of industrial automation to new markets, including small and midsize enterprises. Present day cobots are becoming increasingly equipped to handle industrial tasks. Their intelligence, along with flexibility and productivity, are highly desirable qualities for any manufacturer looking to maximize return on investment (ROI).

How Is the Market for Cobot Technology?

The estimated global market size for cobots stood at $1.38 billion in 2018 and is forecasted to reach $9.21 billion by 2025. The major driver of cobot technology in the global robotics market is the availability of human safety feature, which enables companies to minimize factory accidents that were prevalent with traditional industrial robots. Moreover, the prices of cobots are constantly falling, thereby making them a viable solution with a wide range of applications, inside and outside the factory setting, for any big or small company. 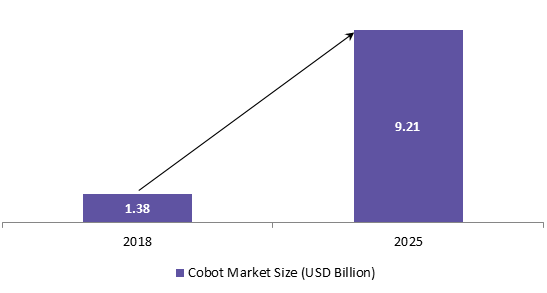 In addition, the cobots are technologically advanced with easy-to-use and flexible options available for implementation. Often, little to no programming is required to install them, which reduces the integration costs. Such increasing flexibility opens up a wide range of new tasks and applications that cobots can effectively automate, such as pick and place, packaging, palletizing, inspection, machine tending, and more.

Cobots have witnessed significant demand from a large number of industries all over the world, such as the automotive, electrical/electronics, metal, and plastics industries.

Next in line is the electrical/electronics industry, which is catching up with the automotive industry. The major driving factors boosting the usage of robots in this industry are:

With the usage of robots, metal industries have witnessed more flexibility and cost efficiency, rubber and plastics industries offer more integrated manufacturing concepts, food and beverages industry has witnessed a shift to even shorter production runs, while pharmaceutical industry is experiencing improved productivity without sacrificing quality. As a result, the demand for robots (both traditional and collaborative) is expected to gradually rise in the near future across all industries.

A cobot brings in a multitude of advanced robotic automation to companies with no extra costs associated with traditional robot programming and setup. As a result, robotic automation becomes more affordable for small and mid-sized enterprises to run their production units efficiently.

Some of the major benefits brought in by cobots are given below: 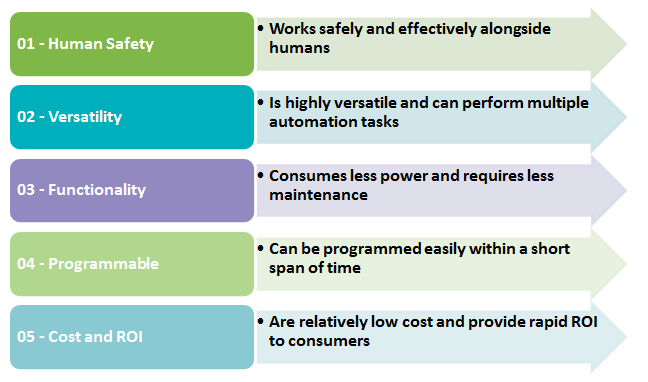 Although cobots are being widely accepted and used across industrial production scenarios for multiple applications such as pick and place, inspection, and packaging, their usage is gradually being realized across other applications such as cooking, gardening, and surgery. The future of cobot technology is very bright with a lot of opportunities.

Cooking: Cobots have moved from food processing into restaurant kitchens. However, the equipment must be clean, consistent, and efficient. For example, Miso Robotics’ Flippy uses a cobot arm from Fanuc, with a variant of EOAT (an AI platform) and cloud-based monitoring functions. Flippy is a burger-flipping robot that can work on a grill or fryer, comply with OSHA and food-safety standards, and run continuously for up to 100,000 hours.

Cobotic bartenders and coffee makers: There are instances where cobot arms are being used as robot bartenders across cruises, hotels, and pubs worldwide. In addition, commercial outlets selling coffee use cobot arms to make coffee and serve customers.

Surgeries with cobots: In the future, robotic arms are expected to assist in highly specialized surgeries. However, they need to comply with strict regulations, meet high performance requirements, and might force surgeons to get more training. For example, researchers at Nottingham Trent University are developing “Scoliobot” for precise spinal surgery. Currently, they are working on 3D-printed models with two UR5 cobots and are using augmented reality to provide surgeons with live feedback.

Cobot as co-pilot: Boeing’s Aurora Flight Sciences are working on a robotic co-pilot concept using a UR3 arm. The Aircrew Labor In-Cockpit Automation System is working to combine a tablet interface for pilots, sensors, and flight-control and mission software. The cobot enables it to interact with cockpit controls designed for human pilots.

Universal Robots (UR), based in Denmark, cemented their leadership in the global cobot market by delivering the 25,000th cobot in September 2018. The company was launched in 2003 and shipped their first robot in December 2008. In 2015, Teradyne acquired UR. 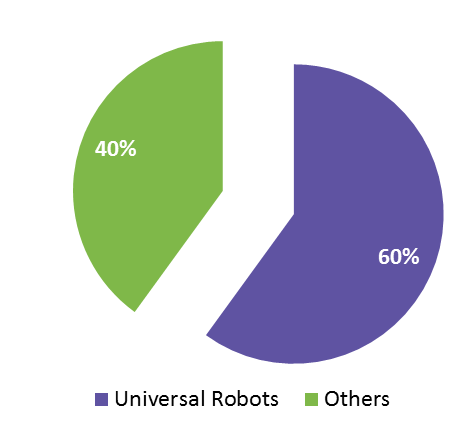 Today, UR is the world’s number one cobot supplier, capturing a 60 percent market share. It was anticipated that Rethink Robotics would follow UR in capturing a sizeable chunk of the cobot market. However, with the company’s closure in October 2018, it has been difficult to come across players who can capture a substantial market share in the global cobot market.

In addition, many new companies/start-ups (mostly Chinese and Taiwanese) have launched in the cobot market and pose as a strong competition to UR. Even big-time industrial robot manufacturers such as ABB, Fanuc, Staubli, and Kuka have produced their own versions of cobot to strongly compete with UR and other peers. Therefore, in the future, it will be interesting to see who moves ahead faster and competes with UR for a share in the global cobot market.

Cobot technology is rapidly growing with adoption across multiple industries, ranging from big corporations to small and mid-sized companies. Cobots continue to extend their features and functions beyond the collaborative nature of the arms, and thus keep adding new dimensions to their capabilities. This includes a diverse and newer range of grippers and vision accessories to extend the application range of such robotic arms. In addition, industry experts predict that over the next few years, the merging of the collaborative and industrial robots is expected to produce the ‘NextBot.’ This platform is expected to combine the safety, programmability, and flexibility of the cobot with the speed, accuracy, and robustness of the industrial robot.