ODMs may soon evolve in the OEM-dominated electronics market

When there is a long-lasting trend for OEMs to outsource their manufacturing function either partly or entirely to contract manufacturers (CMs), otherwise called as manufacturing service providers, OEMs have different priorities in choosing their service providers. Among the CMs, while Electronic Manufacturing Services (EMS) providers involve only in assembling/testing and production of a product/sub-system, Original Design Manufacturing (ODM) providers move ahead in the front-end of the value chain to also involve in designing the product in addition to assembling, testing and mass production. ODMs are evolving faster in more matured sectors such as telecommunications and consumer electronics compared to specialised sectors such as automotive, industrial and defence. OEMs are less likely to choose ODMs compared to EMS for their CM activity due to some reasons such as OEMs having less control over IP rights, designs of PCBs, control boards, etc. ODMs are expected to mainly become potential competitors to OEMs. This article deals with the challenges, opportunities and evolution of ODMs in the OEM-dominated electronics market. It also investigates the reasons for the emergence of ODMs in certain end-use sectors compared to other sectors.

OEMs are companies who design, manufacture and sell products under their own brand name. Generally, OEMs do not always manufacture all their products; they outsource some or whole of their manufacturing to any contract manufacturers who have the ability to mass produce the products and send back to OEMs for any further assembling, branding and marketing. This is done by OEMs to reduce the asset and operational costs of the organization and to improve performance. Many Tier-1 and Tier-2 OEMs have already been moving towards outsourcing 70-80 percent of the manufacturing to either EMS or to ODMs depending upon their manufacturing requirements.

EMS provider is a type of contract manufacturer who receives designs and drawings from OEMs and performs manufacturing, assembling/testing of a part or a sub-system. ODM provider is also a type of contract manufacturer who operates in the front end of the value chain by also involving in the design phase. The growth of these service providers and their market share would give us a glimpse of how the outsourcing market is growing and the areas where ODMs are preferred over EMS.

The OEM-ODM gap is large in many end-use sectors as ODMs are not matured enough in design capabilities in the non-commoditized markets such as automotive, medical, and defense.

ODMs gives a tough competition to EMS YoY in the commoditized market especially such as communication, Computer & Consumer sectors-Looking at the example below; ODMs take up around 38-40 percent of the outsourcing especially in the communications sector.

It is also to be noted that both ODMs and EMS suppliers take up the other service also, i.e., Few ODMs take up EMS role and well-matured EMS firms also perform ODM role depending on OEM request. However, the article investigates the key end-use sectors where both the service providers majorly operate.

Since 3 years, the IT server manufacturing business is slowly shifting from the conventional business model to a direct business model as mentioned in the figure below. This is majorly due to emerging open source cloud based server and storage options for the web services. The current server business model is split into enterprise customers who hold around 70 percent of the market followed by data center customers holding 30 percent of it in 2016.

The modeling and designing of these IT systems has attained a market maturity in terms of technological evolution. Also, the data center manufacturing and implementation with proprietary software would not fully serve the server and storage needs of web-based service providers.

The key market driver for direct business modeling is majorly due to the transformation of storage and server systems to cloud-based implementation where very large amount of data can be processed and stored in clouds. Thus, ODMs shifted their business model to manufacturing white box hardware which can be directly marketed to the end-customers who can implement configurable third party cloud based software or open network software on their own. One large layer in the supply chain has been bypassed in this business model.

This has created a threat to the key OEM players such as DELL, HP, Cisco, Juniper, NetApp, and EMC who have been losing their market share in enterprise server and data center sectors. Now, customers of these players are only enterprise customers whose growth potential is comparatively very low to hyper-scale data centers. Thus, OEMs are also moving towards manufacturing white-box hardware to regain their lost market share.

Personal devices (such as mobile phones and tablets) business for ODM is also transforming in its business approach. While there are several companies that are involved in ODM and EMS services for smart/mobile phones, there are companies that transform from ODM to Own Brand Manufacturer (OBM/OEM). The shift from ODM to OEM may happen when the player

These shifts and business model transformation by ODMs shows their technology and market strength in these commoditized sector.

Referring to figure 3, Automotive, Industrial, Defense, Medical, etc. are a niche market for ODMs. There are very few ODM service providers for these markets. The product capabilities, technical specifications, upcoming technologies, etc. are not standardized throughout the applications of each sector.

Thus, ODMs which see fewer opportunities in these sectors, however, are equipping themselves for technological advancements so as to not miss out on any opportunity.

The comparison chart shows the key parameters of comparison and how one outperforms the other in outsourcing. Each shaded point shows the more advantageous in each parameter. 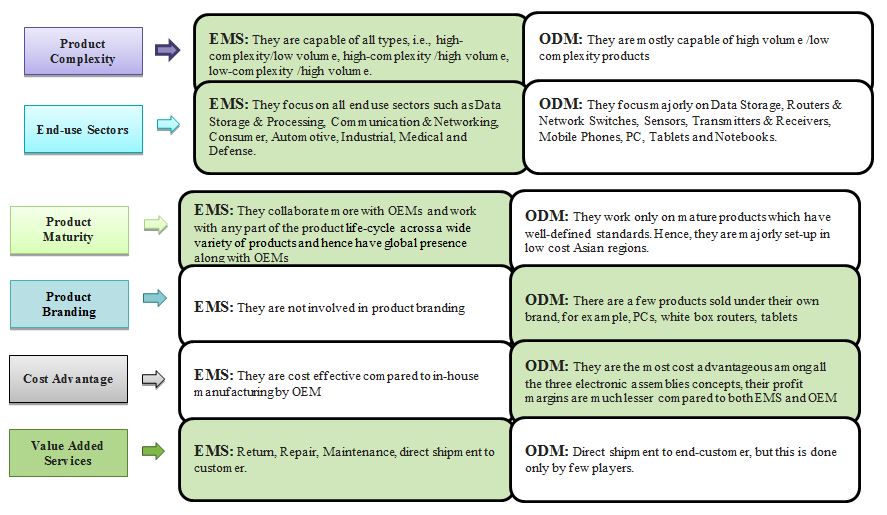 ODMs have a lesser market share compared to EMS and OEMs. However, they are growing faster in the commoditized market over non-commoditized as their products are mature enough to build on their own. ODMs get to see more of their manufacturing in communication and consumer sectors. They are expected to even outgrow EMS market share in another 5 years. However, ODMs have to shift their focus to different technologies, upgrade themselves to latest ones and investigate various business models.

ODMs may face challenges in the non-commoditized sector which has more specialization in technology and may have to investigate new areas of design to venture into these sectors. Quick automation in industrial and automotive sectors would help ODMs to establish themselves in this field. However, being a separate entity, they may not be able to compete with huge giants (OEMs) in these sectors to reach customers. Thus, irrespective of various opportunities and challenges that ODMs face, they evolve significantly through various business approaches in a well dominated OEM market.