by Vignesh Premkumar , Research Analyst
31 May 2020 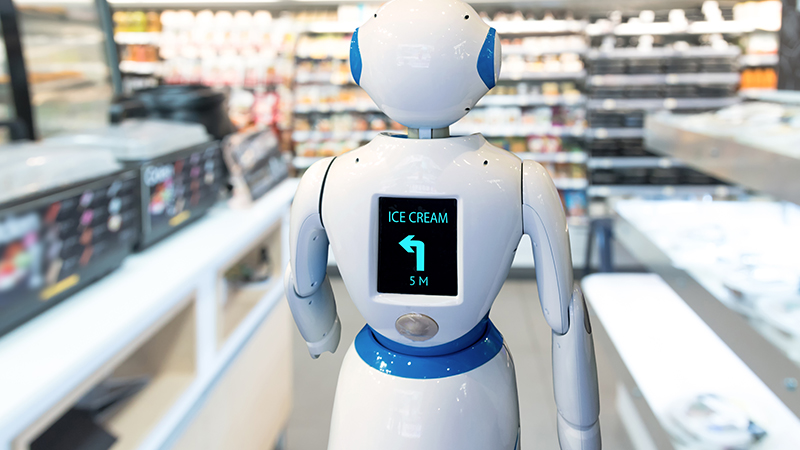 Industrial automation is witnessing significant developments in scientific technology, and this technology has been swiftly adopted in recent times. The robotics industry is expected to experience tremendous growth due to automation in the implementation of industrial activities and processes. The emergence of Artificial Intelligence (AI) as part of Industry 4.0 drives the demand for the robotics market. Robotics, considered to be at the core of automation, has been globally witnessing significant market growth. The need for automation in order to increase productivity and improve efficiency has paved the way for the development of robotics.

Robotics is considered to be one of the key strategies in the implementation of Industry 4.0. Manufacturing industries have been facing tremendous pressures of labor cost, forcing them to outsource labor from low-wage countries. Moreover, the shortage of manpower in many developed countries has been an influencing factor in the development of robots. This whitepaper will cover the need for automation, growth in the global robotics market, recent trends and innovation, mergers and acquisitions, and challenges faced in robotics.

From a business strategy perspective, it is observed that access to technological advancements and the ability to optimize cost through improving productivity and efficiency are key factors to improve business sales. The development of the robotics market is mainly driven by its demand in end use sectors such as automotive, defense, medicine, space, entertainment, etc. Despite the booming growth of robots, high initial investments combined with high research and development costs are major constraints for industry growth.

Revolution in the industry due to robotics and automation is expected to take a more pronounced dimension in the manufacturing sector. With globally increasing labor costs and labor safety standards, robots are being employed in hazardous environments and replacing human interference. The need for robotics is driven by major industries such as automobiles, aerospace, military, healthcare, electronics, logistics, etc., owing to high performance, efficiency, and capability to provide high quality products. In the future, it is expected that industries will become completely automated by installing robots to be used in a wide range of applications.

Robotics has enormous use in many industries such as automotive, electronics, defense, aerospace, metals, chemicals, food, etc. Customized robots have been deployed in these industries according to the requirement. 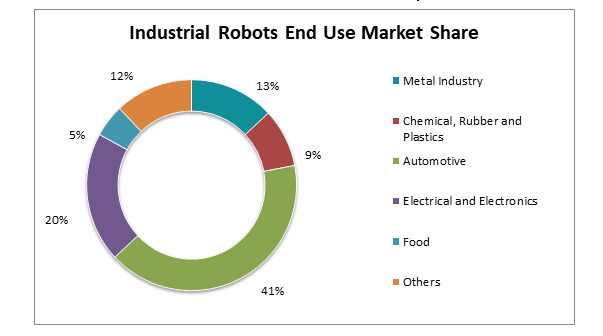 The automotive segment holds the largest market share by accounting for approximately 41 percent of the demand driven by the demand in the automotive sector with an expected CAGR of 8–9 percent during this period. Robots being increasingly employed in the manufacturing sector play an important role in the assembling, welding, and material handling of automotive parts, thereby reducing manpower. The second major accounts for around 20 percent of the demand and is held by the electrical and electronics industry, which is expected to grow at a CAGR of 6 percent due to an increase in electronic manufacturing industries across the globe. The metal industry accounts for a share of around 13 percent of the demand, which is due to an increasing number of robots being used in metal processing industries. 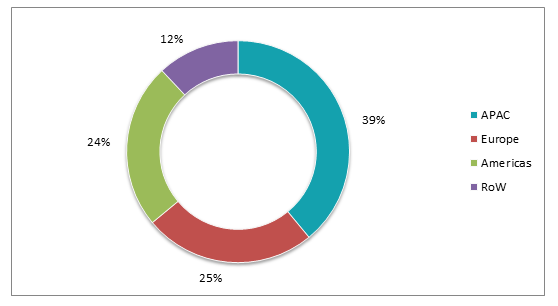 APAC holds the highest share of around 39 percent of the overall demand due to growing automotive and electronics industries in Asia, particularly in China, which is largest automobile market growing with a high-potential for electric cars. Europe holds the second largest share, of around 25 percent of the demand driven majorly by the automotive and manufacturing. The Americas have around 24 percent of the demand owing to industries relying on new technologies moving towards the concept of Industry 4.0.

Major Players in the Market

Robotics has had a significant impact on supply chain execution, especially in the order fulfillment process in warehouses. Many organizations have introduced robotics into their warehousing and fulfillment processes, and have achieved greater advantages in productivity, efficiency gains, flexibility, increased safety by relieving humans of dangerous tasks, and the ability to achieve customer service levels. Online selling companies such as Amazon and Flipkart have incorporated robots for material movement and product sorting in their large warehouses. In 2017, Amazon had 100,000 robots for a range of warehousing tasks including picking, lifting, sorting, and palletizing activities.

The robotics market is expected to grow in pace with the demand in many manufacturing industries. The need for high performance, high efficiency, and multi-purpose robots are key factors expected to drive innovations in the market. With the advent of Industry 4.0, companies operating in the robotics industry are continuously evolving by developing partnerships with those that offer technologies such as IoT, AI, etc. The competition between leading manufacturers is expected to significantly increase the market potential.