Advances in fermentation and purification technologies have enabled the development of drugs from peptides and therapeutic proteins. While few peptide-based drugs have reached the market, several proteins and peptides are currently under clinical trials.

As companies look to outsource peptide manufacturing, they need to have a clear understanding on CMOs and their capabilities in protein and peptide drug manufacturing. To summarize whitepaper covers supply and competition in peptide market

Peptide and proteins drugs are available in the market but have their own advantages and disadvantages. Peptide drugs have always been effective in their activity and specificity but lack some of the other qualities of a drug to sustain in the market. Peptides have a complex chemical structure that makes them expensive and complicated to manufacture. Peptide drugs due to their low oral bioavailability need to be administered through parenteral route.

All developing techologies will account for further development in the protein and peptide therapeutics market and improve their overall position in the pharmaceutical industry.

Peptides and Proteins in Pharmaceuticals

Several therapeutic peptides and proteins are approved by the FDA and have been in use. One of the most common therapeutic proteins is insulin. Small molecule and peptide-based drugs are classified under New Chemical Entities (NCEs) during FDA licensing, while protein-based drugs are classified under New Biological Entities (NBEs).

Most of the approved therapeutic peptides and proteins available in the market are used to treat metabolic and immunological disorders. Their contribution is also found in the treatment of cancer, hematological disorders, etc. 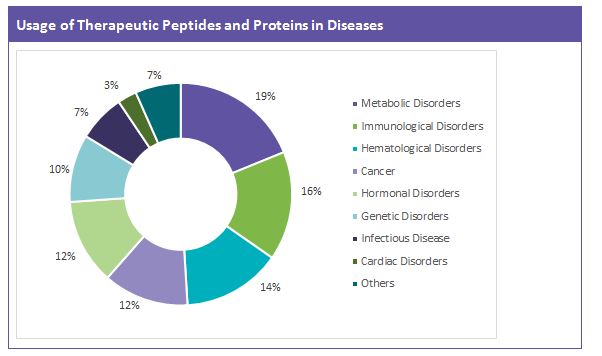 Almost all peptide-based drugs are to be administered through parenteral route. However, alternate routes of administration such as oral and topical use are also gaining traction nowadays.

Several innovator companies such as Amgen, Novo Nordisk, Pfizer, Eli Lilly, Roche and AstraZeneca have peptide and protein drugs in their pipeline. Some of the top selling peptide drugs include  Victoza (Novo Nordisk), Copaxone (Teva), Lupron (Abbott), Zoladex (AstraZeneca). Most of the drugs currently available in the market are mostly used in the treatment of Type 2 Diabetes. Glucagon-like Peptide 1 (GLP-1) Receptor is one of the widely developed peptide molecule in the pipeline. GLP-1 receptor antagonists offer glycemic control with a low risk of hypogycemia which makes it an attractive option for drug developers.

Some of the peptide and protein drugs that are currently in development are:

CMOs for peptides and proteins

Global Peptide API demand is around 1400 kg per year. Currently nearly 50 percent of the total peptide API demand has been outsourced to CMOs and the percentage is expected to increase further by 2017. Outsourcing decision is mostly based on expertise and experience in peptide synthesis.

Some of the major CMOs and their capabilities are listed below. 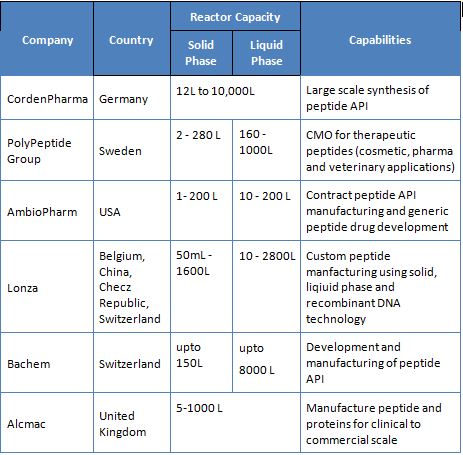 Most of these companies use solid-phase, liquid-phase or receombinant DNA technology to manufacture their peptides. Other smaller companies who are in the development and manufacturing of peptides and proteins include AmbioPharm, CPC Scientific Peptide Company and Chemi Peptides.

To meet the growing demand several CMOs have equipped themselves by making acquisitions and expansions.

·         In August 2015, AmbioPharm announced the expanison of its manufacturing operations in South Carolina with an investment of $18.8 million

Technologies in the market and Partnerships

With several manufacturers available in the market to support peptide and protein manufacturing, pharma companies engage with these CMOs for their peptide and protein API manufacturing. However, the delivery of peptide drugs is a limiting factor that prevents the growth of thrapeutic peptides market. To overcome this bottleneck pharma companies have entered into partnerships with technologically strong companies to utilise their technology platforms.

Companies that have their own proprietary technologies for peptide and protein development include:

Therefore, big pharma companies can look at collaborating with similar technology specific companies to develop affordable and easy to deliver proteins and peptides.

In recent times there has been increased traction in the pharmaceutical industry for peptide and protein therapeutics. This is mainly due to their efficient management of numerous disease indications. With several new technology platforms emerging in the market to address the issues of low bioavailability and high protein production cost, more peptide and protein drugs are expected to enter the market.