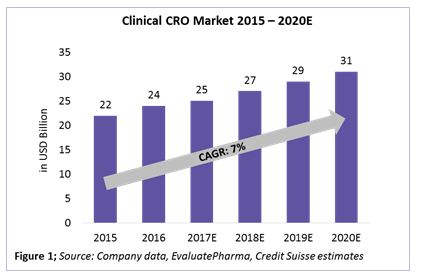 The clinical CRO segment is largely driven by large molecule development outsourcing, which has increased from about 35 percent in 2013 to 45 percent in 2017 due to greater availability of reliable single-use technology. Some of the major drivers of this segment are shown in Figure 2 below. 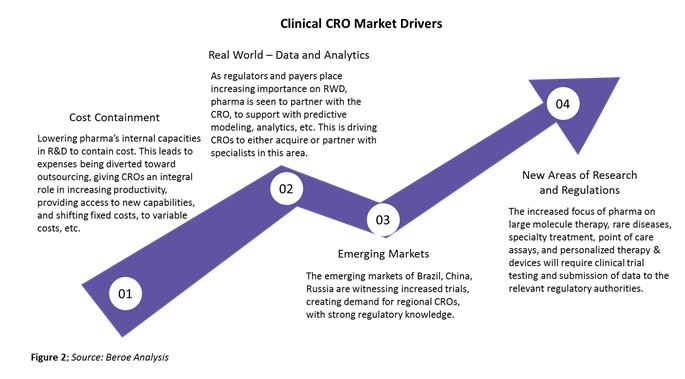 Of the total clinical spend, early phase clinical contributes 12 percent, and phases 2-4 contribute the highest, at 58 to 60 percent. In terms of clinical services market share by region, North America and Europe together hold greater than 80 percent of the CRO market, with pharma spending around 45 and 38 percent, respectively, of their clinical trial R&D in these regions. Figure 3 provides the clinical services market share by region. 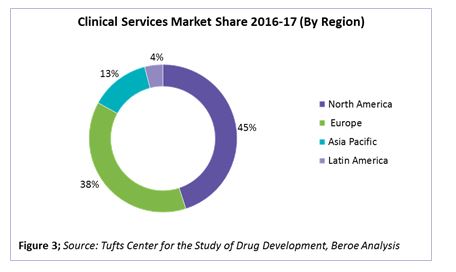 We are seeing increased outsourcing by large pharma of clinical services such as clinical data management, biostatistics, and pharmacovigilance, to the emerging market in India due to the availability of low-cost labor, which will further drive increases in revenue in the Asia-Pacific region in the future.

According to a recent industry analysis by Credit Suisse, clinical outsourcing penetration has increased from 41 percent in 2015 to 45 percent in 2017. This is expected to reach around 50 percent by 2020 (Figure 4). 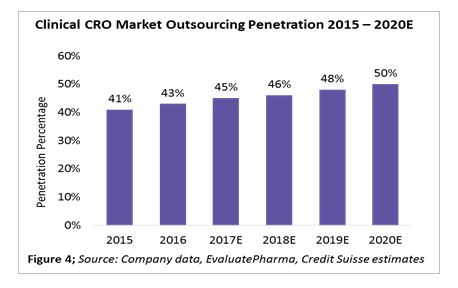 In the past two years, over 60 percent of sponsors have shown greater reliance on CROs. This trend is mainly attributed to the rising costs of R&D coupled with profit pressures, need for innovation in the R&D process, globalization of clinical trials from pharma perspectives, and achieving greater efficiencies via CROs’ scientific and therapeutic expertise. While 34 percent of pharma respondents stated that their outsourcing strategy is unchanged, 23 percent stated they plan to incorporate strategic partners. The reason for the growth in the use of strategic partners is a focus on supplier consolidation. Thirty-four percent of companies indicated a preference to engage large CROs for exclusive partnerships rather than midsize or niche specialists (Figure 5). When bundling phase 2 with late stage and clinical support services, such as data management, biostatistics, etc., larger CROs are preferred. For early phase clinical category where access to specialized patient populations is key, niche specialists are preferred. 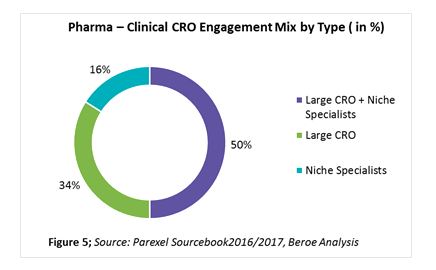 On an average, global pharma companies engage with 25 to 30 players for early phase outsourcing, with 67 percent of those being regional and 33 percent global in nature. The percentage of engagement by function is shown in Figure 6. 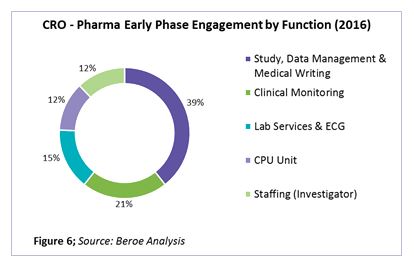 Figure 7 shows the top 20 CROs based on their market share, using clinical revenues from 2015/2016. The top 20 CROs make up more than 60 percent of the overall clinical CRO market, with the remaining 39 percent being fragmented among niche specialists. 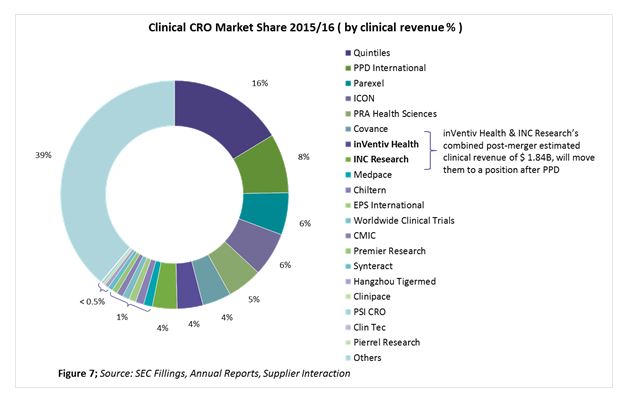 Each CRO is either a global player or a regional player. Also, among the top 10 players there is a continuous trend of mergers, acquisitions, and collaborations to stay competitive and maintain a unique position in the market. Their positions can be described in terms of enhanced therapeutic area expertise, geographic reach, full-service capability, technology, and increased functional capability. The following look at recent expansions by PPD and Parexel shows where those suppliers are moving.

Parexel’s and PPD’s supplier deals by type are shown in Figure 8. Based on the analysis, Parexel is launching new platforms increasing its technology capability with four M&As and eight expansions around this area. Areas of technology investment include portfolio planning, product positioning, market assessment and forecasting, strategic and business planning, pharmacovigilance, trial supply management, and EHR. 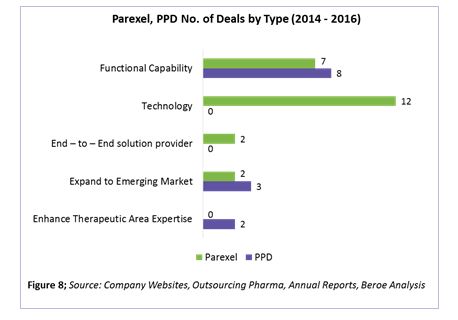 PPD, on the other hand, is moving toward increasing its functional capability, with three M&As and five expansions in this area. Areas of expansion include real-world evidence, mRNA-based drug development, Japan trials, phase 1 bridging studies, cardiac safety, respiratory services, and clinical outcome assessments.

Pharma companies are increasingly asking “Can consolidation be implemented within the entire clinical development services?” This question is being addressed by the supply market, wherein larger CROs are consolidating the market share with acquisitions of niche specialists and mergers with other large CROs. The recent merger of inVentiv Health with INC Research is a good example of this. Pharma companies can partner with the CRO providing the best fit based on whether they need a full-service provider, an innovator, or a supplier with enhanced geographic reach or access to specialized patients.