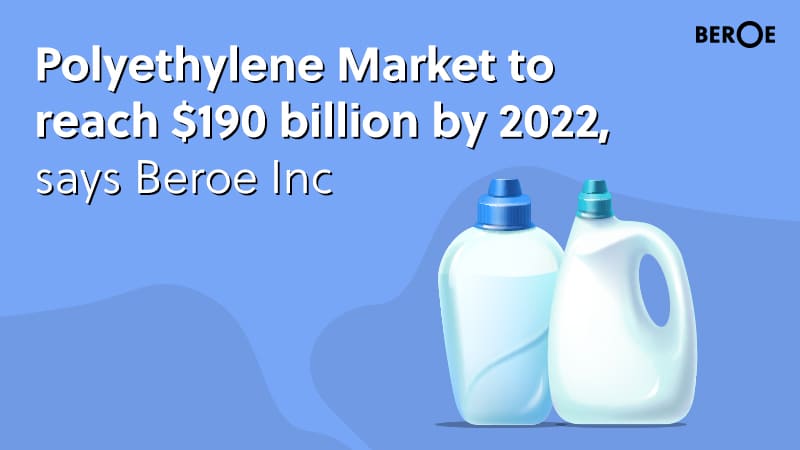 Polyethylene market size: The global market for polyethylene (PE) is expected to grow at a CAGR of 3.8 percent until 2022, according to Beroe Inc, a procurement intelligence firm. The high demand is mainly driven by blow molding applications and food/non-food packaging applications.

Beroe, which is based in North Carolina, further stated that procurement experts can access this report on its recently launched market intelligence platform Beroe LiVE: live.beroeinc.com

The abundance of low-cost ethane in the U.S. has been driving PE capacity expansions in the U.S. and Canada, where over 10 MMT new capacity of PE would be available online by 2021. In addition, the commencement of the US ethane exports into Europe and India are likely to drive the competitiveness of integrated PE producers outside of the U.S. market. However, the European Union has set its targets for recycling to over 40 percent by 2025, which is expected to curb the demand for virgin PE in the market.

The new capacity addition in Iran is expected to be an industry driver for PE and lifting of sanctions on Iran will furthermore drive the new PE capacity additions in Iran. Around 5 million MT new PE units are slated to be available online, which is presumed majorly for exports to the Asian and the European region.

The research methodology adopted for the report included:

According to Porter’s Five Forces analysis, due to a high supplier power in the North American region, the price increase has been driven without much opposition, and high freight cost limits importing opportunity for the buyer. On the other hand, the import dependency of C4 LLDPE is high in Europe with no capacity additions expected until 2022.

Beroe is the world's leading provider of procurement intelligence and supplier compliance solutions. We provide critical market information and analysis that enables companies to make smart sourcing decisions—leading to lower costs, greater profits and reduced risk. Beroe has been providing these services for more than 13 years and currently works with more than 10,000 companies worldwide, including 400 of the Fortune 500 companies.