India's weather office, India Meteorological Department (IMD), said recently that monsoon rainfall is expected to be 88% of LPA (Long Period Average), which potentially indicates that 2015 could turn to be a year of drought. The prediction is 2 percentage points below the drought threshold levels. It's not good news if this trend plays out.

The Indian monsoon arrives over the subcontinent following a period of intense summer heat. This natural weather system has been in existence since time immemorial. Owing to hot air circulation over the land, cooler monsoon winds from the Arabian Sea and Indian Ocean gets sucked into the subcontinent resulting in torrential downpour. Â Parched lands and drying rivers are rejuvenated by bountiful rains - the season may last anywhere between four and five months.

However, this weather pattern can be disrupted by another naturally occurring phenomenon called El Nino.

The El Nino weather phenomenon forms every two to seven years and is known to disrupt normal weather patterns in Asia Pacific and Latin America.

The two most populated regions in the world to be affected by El Nino (means "The boy" in Spanish) are India and Brazil; and to some extent the United States.

El Nino, a warming of the surface of the tropical Pacific Ocean that can trigger downpours or droughts around the globe, has been worrying agro producers and consumers alike, ever since Japan's Meteorological Agency said that the El Nino is growing stronger and its effects could last until the winter.

If El Nino phenomenon is active, then the temperature difference between the hot overland air and cool monsoon winds is minimized due to rising temperature of sea surface, which results in below average rainfalls across the Indian subcontinent.

It is tricky to establish a direct correlation between El Nino and crop yields as multiple factors go into determining the crop output. However, since the Indian rainfall deficit is predicted to be severe this year as compared to recent past, there is a possibility for crop yields to be negatively affected.

India is an important producer of Pulses, Spices, Sugar, Rice and Wheat among other crops. To be sure, the country has enough food stock to tide over any shortfall in food grains production. However, considering absence of robust monitoring of movement of food stock across the supply chain, the country could witness price swings.

Already because of unseasonal rains the price of Pulses - an important source of protein - has skyrocketed across many regions of the country. Hence, any production shortfall created by poor monsoon can also have an impact on the international market since India is not only a largeÂ producer and consumer of pulses, but also one of the largest importer.

Let's see how the poor monsoon can affect India's key commodities and its likely implications on the global market: 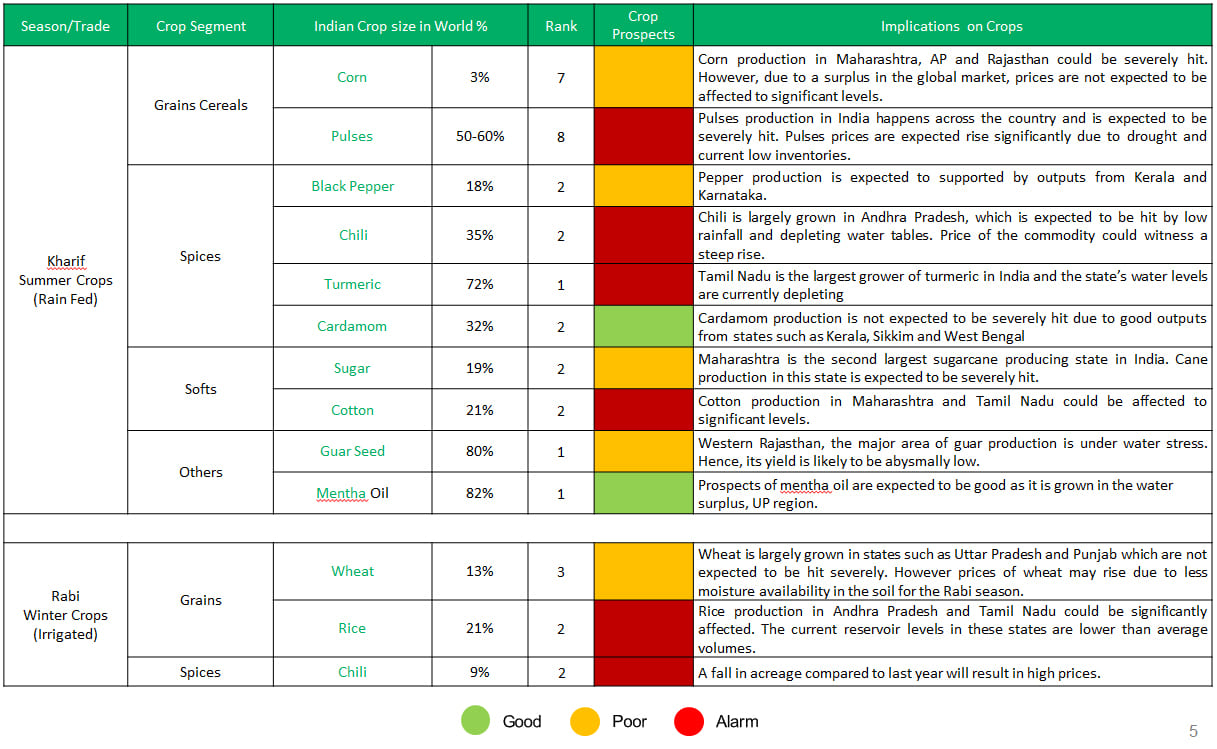