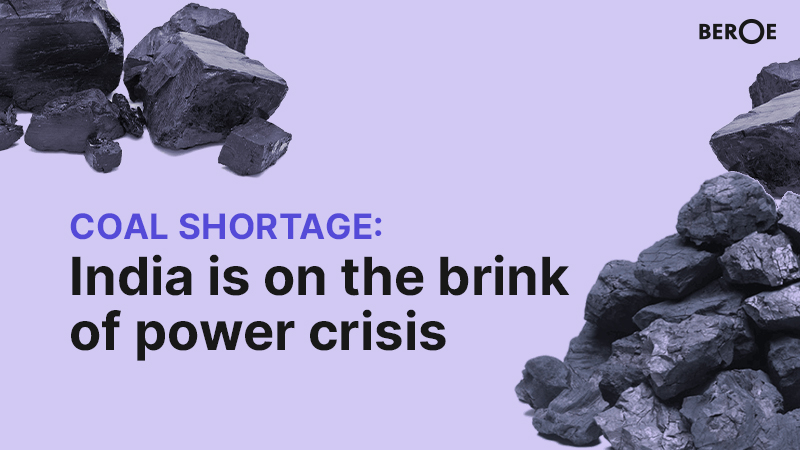 After widespread outages across China over the last few months, a new crisis is looming in South Asia as India looks set to repeat the story over the coming winter months. The country, which gets 66-70% of its electricity from coal-fed thermal power plants, is now facing acute shortages as the supply of coal dwindles.

The past year has seen a huge increase in coal demand globally as industrial demand picked up after a devastating pandemic. This has led to price rise, levels not seen since the 2008 financial crisis. Indonesian coal prices have gone from 60$/MT to 120$/MT over the last 12 months while Australian Newcastle prices have jumped 250% in the same time period (1) . CRISIL, a unit of ratings agency S&P, said it expects Australian and Indonesian thermal coal prices to increase over the remainder of this year, due to supply constraints and higher demand from China and elsewhere.

While India has the fourth largest reserves of coal in the world, it is also the second largest importer after China, with only 75% of annual power demand coming from local production, while the rest is imported from Indonesia, Australia and South Africa (2). And while local prices have been kept constant by Coal India Ltd., the country’s state-run coal producer, Asia’s coal price benchmarks have hit record highs in recent times, leading to imported coal-based power plants generating less than half of their capacity (3). This has been compounded by heavy monsoon rains hitting domestic coal production and movement over the last few months. 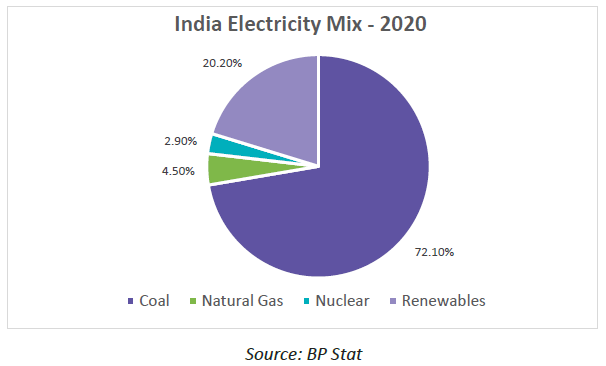 As per data from the country’s grid operator, in the first week of October, over half of the 135 coal-fired power plants had fuel stocks of less than two days against the requirement of 15-30 days of stocks (3). This has led to several states taking action to mitigate possible shortages in the coming days. Punjab’s state owned utility has declared a 3-hour daily power cut until mid-October while in Rajasthan 1-hour power cuts have been confirmed. Tata Power Distribution Ltd (TPDDL) has warned of intermittent rotational power cuts in Delhi. Kerala, Andhra Pradesh, Jharkhand and Bihar are the other worst affected states. State Chief Ministers have been warning of a power crisis while at present the Central Government has been putting up a brave face, assuring that coal dispatches are set to rise in the coming days, improving coal stocks.

Spot prices on the Indian Energy Exchange (IEX) have increased by 40% Y-o-Y in September and rising above 2019 price levels as growth in economic and industrial activities led to an increase in the demand for power (4). This upward trend has carried on despite a very deadly second wave of the pandemic sweeping the nation in April and May. August witnessed a record price jump of more than 70% (from 2900 INR/MWh to 5000 INR/MWh) (4) and prices are expected to stay above this level till the end of winter 2021/22. 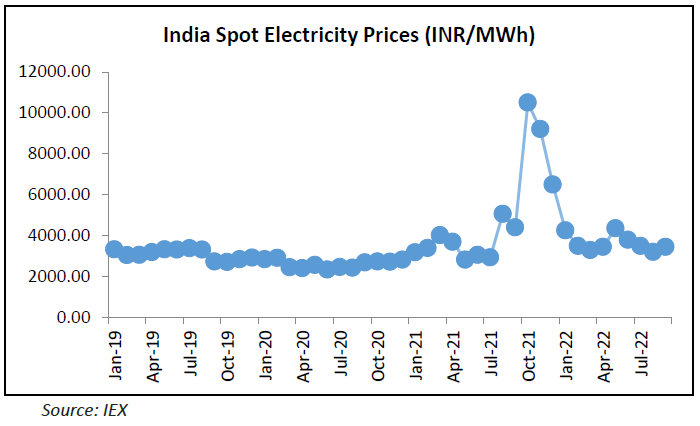 This year’s monsoon season has wreaked havoc on coal production in the country’s eastern and central states, with mines and key logistics routes impacted. On top of this, industrial and domestic consumption of electricity usually reaches its peak in October-November as India goes into festival season. All these factors have helped worsen an already perilous situation.

Prices are expected to see a price increase of over 100% from Q3 to Q4 2021 and then begin its descent from December 2021. We can expect prices to come down to below 4000 INR/MWh by Q1 2022.
The stabilization of prices early next year will likely be due to increase in supply of domestic coal as well an improvement in wind output. However, global coal prices are not expected to see a decline at least until the middle of 2022 as structural problems continue to persist and coal still competes with natural gas for running power plants in Europe and elsewhere.

Small manufacturing units are likely to be the most severely impacted as they don’t have captive power plants (unlike major oil refiners, steel producers etc.). The alternative for these units would be the use of diesel generators. However, prices of crude and downstream fuels have been surging over the last fuel months, which would likely lead to production cuts and increasing costs handed down to end-use consumers.
According to V.R. Sharma, managing director of Jindal Steel & Power Ltd., many primary steel producers are paying more than four times the normal cost for procuring coal in auctions. If these issues persist beyond Q4 2021, it could affect finished steel exports.

Electricity is critical for aluminum production, accounting for almost 40% of the production cost. Producers have warned that stockpiles of coal have reached critical levels. Additionally, any interruption in power supply can cause serious damages to the smelting units, leading to huge economic losses.
Also susceptible are those sectors that require refrigeration, such as poultry, meat and dairy.

Coal India Ltd. Is looking to increase supply by 0.2 million tons from current daily levels of 1.7 million tons in October. However, this is conditioned on the weather improving and being conducive to production and movement of trucks.The Central Government has also allowed companies that have captive coal and lignite mines to be able to sell up to 50% of their annual output, opening another avenue for procurement.

Cutting power on a rotational basis is the simplest way to manage power shortage. This would help keep plants running, albeit at lower industrial output. However, it is likely that cities and large urban areas will be prioritized over rural and semi-urban areas as well as energy-intensive industries, which may have to look for alternate means of power procurement.

The monsoons have been filling up dams across the country and are expected to increase the share of hydroelectricity in the fuel mix. Natural gas is another alternative and can be purchased on the spot market as 80% of gas-fired capacity currently remains unused in India. But the record prices of LNG have made it a prohibitively expensive option and at current prices, is not a viable alternative. Another option is the use of diesel generators, as discussed above, to overcome temporary outages.

New laws are being formulated to allow generation companies to sell surplus electricity on the power exchanges which would incentivize generators to open plants that have been idling or running at low capacities. High prices at the exchanges like IEX are thus expected to increase supply from the country’s generators and can be looked upon as a provisional fix until coal supplies improve.
All these are short-term solutions that can help the country and its industries weather the next 3 months, by which time demand is expected to decline as it usually does in winter, while giving time for coal production to pick up steam.