The legal market has seen some pronounced falls and rises in the number of mergers and acquisitions (M&A) over the past nine years (2007-2016). With recession dictating the market dynamics from 2008 to 2009, big law firms brought in several smaller firms under their umbrella taking “the need for financial strength by the midget firms” as a cue. Post-recession years witnessed a drastic dip in the numbers, as the firms started prioritizing their internal cost cutting issues over expansion.

After witnessing a moderate plateau during 2011 and 2012, a ravenous trend of M&A followed, concluding with a record score of 91 in 2015. And the legal soothsayers reckon that 2016 will only see a further rise in numbers.

This article would discuss the following M&A aspects in detail:

With the changing industry dynamics and demand for better legal services by the corporates, law firms globally are looking to improve themselves in all ways possible -- M&As being one of them. As the law firms respond to the macroeconomic factors and get into M&As in varying intensities, we can delve into the various possible reasons that are behind their moves to collaborate. Following is a year-on-year analysis of M&A scenarios:

The period from 2007 to 2012 saw some modest numbers in law firm mergers and acquisitions. A visible effect of recession has been noticed from 2009, hitting an all-time low in 2008 and then a gradual recovery from there on.

Domination of small firm mergers - This year recorded 73 (60 effectively as 13 announcements were made in 2006) law firm M&As, a majority involving small firms than large firms.
Cross border mergers - Seven of the total were cross border mergers by the U.S. firms. The largest merger in terms of size of the acquirer was between Mayer Brown (Chicago) and Johnson Stokes & Master (Hong Kong). Globally there were 17 multi-regional deals involving law firms from various geographical regions.
Reasons:
Competition - One of the probable reasons for the number of M&As is the intense competition in the legal space.
Industry influence - Another possible reason might be the rampant consolidation in other industries and those companies requiring larger law firms to provide them services at several locations.

Rise in numbers - In this year, a total of 70 new law firm M&As were announced in the U.S. This is a rise of 17 percent over the number in 2007.
Deals that stood out - Two of the biggest deals took place between K&L Gates (Pittsburgh) and Kennedy Covington, and McGuire Woods (Richmond) and Helms Mulls. Three percent of the total deals were cross-border mergers and acquisitions.
Reasons:
Undeterred expansion plans - Despite the deteriorating economy, the law firms stood strong on their expansion plans and hence the good number of consolidations.
Defensive collaboration - Invasion of major national firms into secondary markets probably might have driven small and mid-sized firms to combine defensively for better competitiveness.

Fall in numbers - This year saw a fall in numbers with 53 M&A announcements, recording a fall of 24 percent over the previous year.
Cross border overhaul - 40 percent of the total number of combinations in the year were cross border mergers, which was 21.5 percent more than those in 2008.
Reasons:
Recession after-effects - The effects of the recession were very much evident by the sudden dip in the number of M&As in the post-recession period. The reasons were probably issues of internal cost cutting, layoffs and adjustment in compensation in response to the recession.
New markets - The combinations in 2009 were more focused on geographic scope to gain access to new markets rather than simple mergers of scale.
To sustain in competition - This kind of strategy might have been driven by the need to give better service to the buyers and stay competitive as convergence programs started getting instituted in many corporate law departments.

Dip in numbers - This year witnessed an all-time low in the number of law firm combinations. 39 M&As were announced in total, out of which 38 percent of the announcements were done in the fourth quarter of the year, signifying a recovering phase from the recession effects for the law firms.
Deals in limelight - The two biggest deals of the year were between:
Multinational deals – 44 percent of the total combinations are cross border or multinational.
Reasons:
Geographic scope expansion - The M&As in 2010 were more focused on geographic scope to provide access to new markets and new businesses and also to allow the firms to provide services to existing buyers in new locations.
Legal expenditure increase - This was aimed at increasing the firm’s share of legal expenditure.

A slow recovery - This year saw a comeback in the U.S. merger market with 60 M&As announced. This was a rise of 54 percent over 2010.
The newsmakers - The biggest of all was between DLA Piper and DLA Phillips Fox. There was a reduction in cross border mergers as compared to 2009 and 2010.

Maintaining the numbers - This year had the exact number of law firm combinations as in 2011, i.e, 60.
A rise in cross-border statistics - Nine of them were cross-border combinations, the highest number since 2007.
The big combinations - Some of the biggest mergers and acquisitions announced in 2012 were: Fulbright & Jaworski (USA) with Norton Rose (UK), and SNR Denton (USA) with European law firm Salans and with Canadian firm Fraser Milner Casgrain.

Big comeback - 2013 saw a steep rise in the number of M&As, an increase by 47 percent over 2012. A total of 88 deals got announced in that one year.
The largest deal of the year - The most noteworthy merger among all was the one between Stinson Morrison Hecker (Kansas City) and Leonard Street Deinard (Minneapolis). 5 cross border mergers took place in 2013, which accounted for around 6 percent of all the deals.
Reasons:
Small firm acquisitions steal the show – A large number of small law firms acquisitions governed the 2013 M&A numbers. These small firm acquisitions are some smart and low-risk moves to enter new markets and acquire new buyers.

A slight dip - 2014 recorded a slight fall in the number of deals as compared to the previous year by 7 percent. However, there were 82 acquisitions.
The one big merger - The only one large combination that was announced in 2014 was the one between Locke Lord (625 lawyers) and Edwards Wildman (425 lawyers).
Small firm combinations continue - 87 percent of the total deals were small firm acquisitions (less than 20-lawyer firms).

The period for comparison can be roughly divided into two - a phase of fall and a phase of steep rise following a flat recovery stage. The trend line shows an undulation in numbers over the past nine years with a slump in 2010 and an all-time peak in 2015. The rise in 2011 was not sudden showing that the law firms were a little wary after the recession. The last three years have recorded a higher number of deals with 2015 setting the bar high at 91 M&As.

Law firms are always on the lookout for strategic M&As to keep themselves abreast with the dynamic legal environment. The main idea behind merging with another firm or acquiring another firm is to gain a competitive advantage over other firms and to set themselves apart from the rest of the law firms.

To gain opportunities - One of the most important reasons for law firms looking to merge or acquire is to go global by gaining buyers, opportunities, cost savings and a global status.
For established offices - When law firms look at expansion into other countries, building home grown offices from scratch becomes expensive and time consuming. So a merger or acquisition of a law firm in the new location proves to be advantageous on this front. A transactional combination makes it easier to earn the global tag.
Conduit for law questions - When an English firm combines with law firms in other countries, it can provide a conduit for any English law questions from overseas to flow back to the UK.
Combination - Sometimes, a combination rather than a merger happens, where together they work under a single global brand. Profit pools and local management of the individual firms remain separate.

To go national or regional

Entering booming markets - Mergers and acquisitions are an important mode to enter booming and emerging markets. For example: When the U.S. or the UK law firms want to enter markets such as Russia or China, they merge or acquire a law firm in those specific countries. A merger with a UK firm can pave way to enter the European hub, until the Brexit materializes.

Faster solution - M&As are a faster transformation in this aspect than taking lateral hires.
Cross selling - By adding a new team, the law firm wins new buyers and can cross-sell services.
Comprehensive service - In a sector-specific approach, a merger or acquisition can offer a comprehensive service to the existing buyers as well as attract new sector buyers. M&As between firms with complementary practice areas would prove to be advantageous.

Financial strengthening - One of the major reasons for M&As is smaller law firms wanting to strengthen their financial backbone by getting under a larger firm’s umbrella.

For setting up a base

Mergers with local firms in Middle East and LATAM countries are on the rise as the infrastructure sector is on a boom and a merger would prove to be economical to set up the law firm base in those countries.

Legal regulations- In jurisdictions such as Argentina and Brazil, where the legal regulations allow only the local firms to take up certain cases such as patent filing, patent licensing and patent prosecution cases, mergers with the local IP boutique firms can prove to be advantageous for the global firms.
A more effective collaboration - An affiliation would not be as effective as a merger in this case.

Avenues for procurement to explore

With an escalating number of M&As witnessed in the legal industry, corporates can look at it from a procurement perspective. 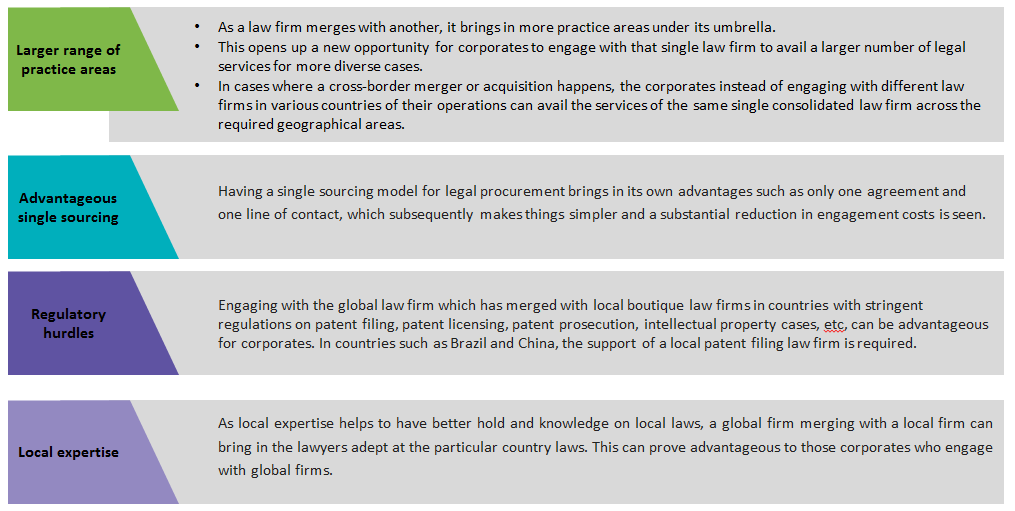 The law firms industry is on par with most other industries with regard to M&As. The post-recession scenario saw a dip in the numbers of deals and then a gradual rise to a plateau for two years. The period after the plateau was characterized by a boom in deal numbers for three continuous years. Firms have been undergoing an aggressive coalition after rebounding from the economic downturn. In the nine-year saga of mergers, Dentons stole the show with its audacious streak of collaborations with law firms across the globe and a few more announcements of its potential mergers.

This scenario of aggressive collaboration among law firms provides an opportunity for corporates to improve the cost efficiency factor in their legal procurement. As they replenish their roster after the contract periods, they can consider reducing their total law firm engagements by choosing those law firms that are strategically positioned in terms of their practice area and geographic scope through mergers. This can help reduce costs and increase law firm management efficiency. Corporates looking for expansion in highly regulated countries can benefit from engaging with law firms that have recently acquired the local firms of those countries. It is therefore very important for corporates to keep track of law firm M&As to avail cost-efficient legal procurement.