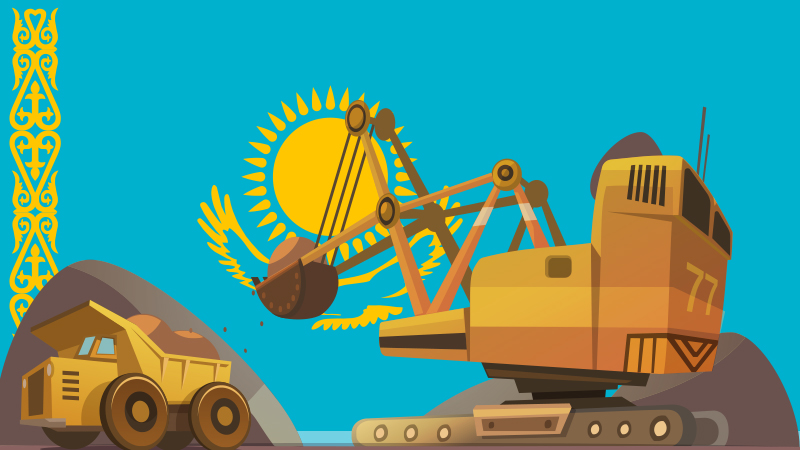 A civil protest that started in Zhanaozen, Kazakhstan, over rising LPG prices, metamorphosed into a large-scale anti-corruption movement; the resultant public unrest engulfed most of the country. In response, President Kassym-Jomart Tokayev had declared a two-week national state of emergency to contain the situation; the government resigned on Jan. 6, 2022.

As Russian troops entered Kazakhstan to restore order, thousands were arrested and hundreds injured. The disruption plunged Kazakhstan—the Central Asian country that accounts for over 40 percent of the global uranium production, 18 percent of chromium output, and 3 percent of the global gold and copper production—into a dark zone with uncertainty associated with its supply of uranium, zinc, tungsten, barite, silver, lead, chromite, copper, fluorite, molybdenum, and gold in addition to oil and gas.

Kazakhstan’s advantageous geographical location has allowed it to become one of the key commodities suppliers to Asia and Europe worldwide, although the country’s enormous mineral resources are still currently under development.

According to official data, the country holds 30 percent of the global chrome ore, 25 percent of manganese ore, 10 percent of iron ore, 5.50 percent of copper, 10 percent of lead, and 13 percent of zinc reserves. In addition, Kazakhstan has vital mineral and metal reserves, such as uranium, coal, gold, bauxite, phosphate, titanium, and tungsten. Presently, the country is a global leader in uranium production, the second largest producer of chromium, and the seventh major producer of zinc.

Kazakhstan also paves a crucial transit path for China’s “One Belt One Road” initiative that aims to strengthen the trade relations between China and other Central Asian countries. Considering the substantial potential of the country’s mining and infrastructure segment, huge foreign direct investments, together with comparatively well-established export markets, are likely to be the foremost parameters for foreign investors’ influx to Kazakhstan.

Additionally, there are numerous other small and medium-sized mining firms such as Kazphos, Polymetal, Altynalmas, Yildrim, and Central Asia Metals as well as oil companies such as TengizChevroil, Gazprom, KazMunayGas, and Total.

This anti-government protest that shook the nation prompted a sudden surge in LNG prices that led to a public rage.

Kazakhstan has the world’s 12th largest crude oil reserve, estimated at 30 billion barrels; it tripled its oil output in the last two decades to approximately 1.80 million b/d. This is anticipated to reach 2 million b/d by FY 2024 and about 2.6 million b/d by FY 2030. Onshore oil fields are deteriorating in the western province of Mangistau, which is a hotspot for the fuel price protests that sparked the current unrest, particularly in the oil town of Zhanaozen.

Other vital trades from the republic are:

Metals: Due to restricted domestic demands, the metal industry primarily relies on its exports to foreign markets for high-value processing. In FY 2021, approximately 450 thousand to 500 thousand metric tons of refined copper was exported to the adjacent markets such as Russia, Belarus, Armenia, and Kyrgyzstan. From January to November 2021, China imported 765.11 thousand metric tons of copper ore and concentrates from Kazakhstan, accounting for 3.60 percent of its overall copper ore and concentrates imports. In addition, an import of 242.82 thousand metric tons of copper cathodes in the first 11 months of 2021 represented 8 percent of the total copper cathode imports of the country. The Alashankou port in China is a major entry point for imported shipments from Kazakhstan. The port recently faced challenges owing to COVID-19 safety restrictions.

The disturbance has sent supply disruption concerns from the downstream market to numerous commodities and energy markets. However, according to several mining companies, their mine output is unaffected, and they are operating normally (pre-crisis scenario).

Thus far the unrest has had relatively less impact on the mine output and its related processing. It is speculative buying that triggered a uranium spot price jump. In addition, we note that China's copper market was unaffected by this turmoil.

However, recent cuts in the telecommunications sector could have an impact on logistics. We find a multi-window choke point in labor, equipment, and transshipment services. Lead time is anticipated to be unstable. The ongoing shipment would be withheld at different checkpoints (intra-and inter-region). In addition, regional unrest would cause a delay in new shipments. This would ultimately lead to inventory pile-up and uncleared shipment, thus resulting in a forced output cut. Although the region would have sufficient volumes, there would be an induced shortage.

Volatile situations are anticipated to stabilize by the end of Q1 2022. Supplier switching costs would offset benefits from an alternate sourcing option. However, buyers are advised to prioritize regional sourcing partners in the next three months as alternative sources in order to avoid possible bottlenecks in a critical spending area.