Ireland serves as a strategic hub for medical devices and electronics

Ireland has become a hub of activity for electronics research and development (R&D) recently following an upward growth from nano-scale level. The application areas are primarily in Internet of Things (IoT) and medical devices.

From a manufacturing perspective, Ireland is used as a global location for the production of complex high margin devices (EMC), medical grade or heavily regulated products by major global leaders and development of critical elements behind IoT products. Ireland has been observed to have efficient skill base, significant amount of research-based education system, thriving R&D sector and a noticeable track record of bringing innovative products and services to market quickly.

It is observed that innovations majorly are arising from the U.S. while the supply chains are increasingly located in the Asia Pacific region. Ireland can act as a bridge between R&D and manufacturing. It can act as a central hub against these extreme end locations to manage the innovation and supply chain at a single point. The Irish government agency engages with companies across different industries to explore their business prospect to use Ireland as their strategic location for building their international business and grow their operational footprint.

This article discusses the increasing R&D and manufacturing in the Ireland market, the growth perspective and the future hub for semiconductor manufacturing companies.

Medical electronics has become a boon for medical sciences and overall medical industry. It plays a significant role in patient diagnosis and monitoring activities. Medical electronics have a wider range of applications in medical imaging, surgical medicine, diagnosis and monitoring, testing and ailments, etc. to cater to the need for advanced medical services. Similarly, Internet of Things is finding its biggest market in almost all the industries. Any product or services used would require a wireless communication or a cloud service to transfer or share data from one end of the world to the other. Starting with sensors, smart phones, the data it produces, cloud and business intelligence tools are together called internet of things.

Ireland has become a major R&D and manufacturing hub of choice by market leaders especially in medical electronics and electronics for IoT. Among the top 20 global leaders of medical devices, 15 of them have their operations in Ireland. The key players in Ireland are Johnson and Johnson, GE, Medtronic, Siemens AG and Baxter International. Ireland has become the second largest market in Europe generating revenues of about $12.5 billion following Germany which generated revenues of about $18.5 billion. It is also understood that Europe is the second largest medical device manufacturing market contributing around 23 percent of the market share of the overall global medical devices market. From this, it is inferred that almost 25 percent of the European revenue is generated by Ireland medical device market. 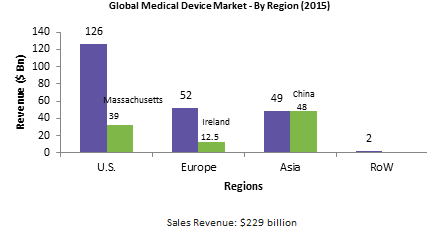 Similarly, the IoT technology is equally a fastest growing market along with the global growth rate of around 18 percent every year with respect to the millions of units installed. IoT is all about collect, connect and transform data. Collection of data which is being the most critical part of any IoT service, the competence level in manufacturing semiconductors, actuators and microelectronics is very high in Ireland. Similarly, Ireland has the 7th fastest broadband speeds in the world which makes data sharing easier and faster. Major telecom players who provide the fastest connections in the country include Virgin Media, Vodafone and ESB. The less explored area is the collected and connected data to be analyzed. However, Ireland is also a hub for major data analytics centers established by Accenture, AON, SAS and SAP. Insight, which is one of the largest publicly funded data research Center in Europe has its base center in Ireland which helps in transforming the big data into useful information for the people.

While defining medical technology companies into diagnostic, ophthalmic, orthopedic and vascular in Ireland, it is indeed important to witness the reasons for the rapid growth of the industry. The major social reasons for the growth of global medical devices industry are as follows.

The aging population (65+) in Ireland is 14 percent while 10 percent of the 65+aged people are still on employment. This indicates that the population is being healthier with improved longevity due to medical technology improvement. This in turn helps in further growth of the medical devices industry with focus on good health and diagnostic treatments to improve longevity further.

The major technological and economic reasons for the growth of medical devices industry are as follows:

There are 300 medical device companies spread across different regions of Ireland with major focus in Dublin and Galway region. According to the latest survey conducted by Ireland Medical Device Association with the companies, 94 percent of the Irish medical device companies expressed their successful business achievements and confidence for future business in Ireland. The figure below shows the percentage of med tech companies expecting various business perspectives in the months to come. 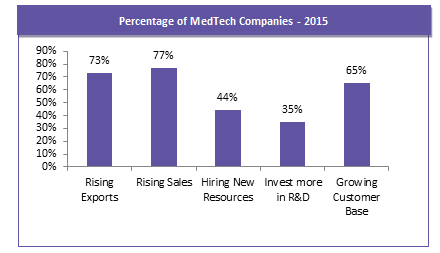 As IoT is basically meant to be services combined to produce output or solution, Ireland has been seeing very high growth prospects in this industry. 9 of the top 10 global software companies have their operations in Ireland and top 3 global enterprise software companies also operate in Ireland. The social, technological and economic reasons for the rapid growth of IoT devices industry in Ireland is as follows:

The Irish government in its recently published National ICT Skills Strategy and Plan indicated its partnership with key industry players in the ICT space. Also publicly funded research institutes help in R&D support for many corporate and academic research level projects. This hadled to increase in the number of computer, software and electronic engineering graduates even from third level institutions. The table below shows the key leaders in research and development and their R&D centers in Ireland majorly for ICT and Internet of Things.

Apart from the research centers rapidly proving latest technology and services growth, the semiconductor giants Intel and Analog Devices have come up with an intuitive technology for IoT services. Intel, who has been in the tech presence in Ireland for decades together, has opened a new lab named Ignition Lab near Dublin. This IoT lab in Leixlip, County Kildare, Ireland, showcases innovations built on Intel technology that are focused on the areas of smart homes and buildings, smart cities, energy and utilities, and smart agriculture. Intel has visualized converting Dublin as the world’s first location to have IoT in everything and make it a smart city. Each lab has a showcase area, featuring solution demos and developer kits. The most important focus of the lab is to turn customer projects into commercial products and revenue. Intensive workshops provide training that covers everything from Intel IoT Gateway to Hadoop and big data analytics.

Apple is also building their first Non-US data center in Ireland. It will use 100 percent green energy and will benefit from the country's unique climatic conditions for greatly reduced cooling overhead.

There were 15 key startup companies that established their IoT devices and services which could be used in various industries. Some of them are listed below.

Ireland is the third largest country to use IoT intensively. Security systems through IoT are less predominant in the IoT space as the current technology is less responsive in detecting threats. A proper machine learning technology is to be developed to strategically develop fully-equipped security systems for cloud computing against data hacking. It is a debating state when it comes to security as some claim that the security has to be compromised when using cloud-based services while others focus on methods to collect the data and streamline its use. However, Ireland is forecast to become the world leader in the technology based on current growth prospects and technological implementations in the country. 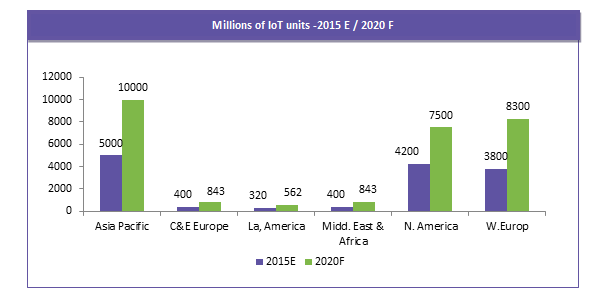 It is understood that both the medical technology and IoT have enormous growth prospects in Ireland. In addition to that, the number of foreign direct investments rose to 8 percent compared to 2014. Among the 213 companies that invested in Ireland in 2015, 94 of them are first time investors in Ireland. This shows the increasing interest in exploring Ireland as a hub for electronics. With all these investments, the export value of medical devices rose to 11 billion in 2015 and shows a 12.4 percent YoY growth in exports. This shows that the exports of medical devices and diagnostic products contribute about 8.5 percent of Ireland’s total merchandising exports. Ireland is the second largest exporter of medical devices next to Germany. The growth has also resulted in monitoring the safety and quality certifications of the product to maintain the trust on the product quality. Adverse incident corrections are appropriately done wherever necessary.

Also, the Ireland labor market has also recovered from its fall in 2012. The unemployment rate has reduced from 15 percent in 2012 to 8.8 percent in 2015. Manufacturing labor wage is one of the key factors to note about the Irish labor market. The manufacturing labor wage per employee is 845 euros/week. Although the figure is higher when compared to the eastern European regions, the labor wages indicated here are for skilled labor. Also, the wages have been increased only up to 4 percent in total since 2008 compared to any other country in Europe where the increase was up to 14 percent. Also, the quality for critical devices such as medical/life sciences is measured beyond the cost. Thus, from the overall analysis, it is evident that Ireland has a very high scope for medical and IoT electronics for the years to come. The high-skilled labor, R&D, manufacturing and supply chain are better handled at this location.