by Srivatsan Govindarajan , Senior Research Analyst, Metals and Mining
8 May 2022 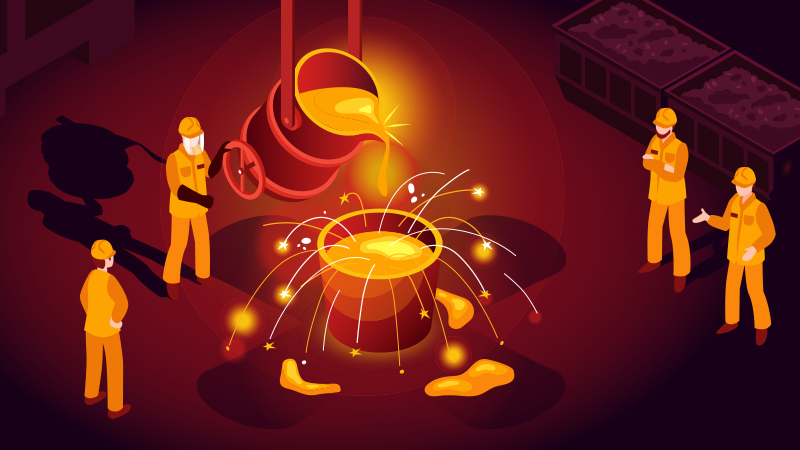 The steel market was barely recovering from the aftermath of the covid outbreak in 2020 and 2021. It has been thrown into chaos once again due to the unprecedented geo-political strife arising from Russia’s invasion of Ukraine. Several western nations have put direct trade bans and sanctions on Russia in the recent weeks.  EU’s import ban on those steel products currently under the safeguard measures will amount to about 3.3 billion euros in lost export revenue for Russia. The impact on the steel markets will stem from multiple factors including the rise in energy, logistics, feedstock costs, and a reduction in competitive imports.

In the first eleven months of 2021, EU’s imports of finished products rose by about 39 percent, while imports of flat products grew by about 43 percent. The main sources for finished steel imports into the EU market were Turkey, the Russian Federation, South Korea, India, and Ukraine. These five countries represented 56 percent of total EU finished steel imports. In January-November 2021, Russia exported 2.96 million tonnes of steel slab, 424,177 tonnes of steel billet, 5.54 million tonnes of iron ore and 536,792 tonnes of pig iron to the EU.

The EU imported 1.99 million tonnes of hot-rolled coil from Russia in 2021 and 1.49 million tonnes in 2020. Overall, Russia and Ukraine contribute a significant portion -- about 21 percent -- of EU’s total finished steel imports. The sanctions on Russia and post war conditions in Ukraine could lead to lower level of imports into the EU and thereby putting upward pressure on the prices due to supply shortages as a result. The duration of the impact due to direct trade is expected to be uncertain as mills and end users alike face difficultly in filling the void left by Russia and Ukraine. However, in the long term, the situation is expected to normalize as there are other viable destinations of imports for EU including India, South Korea, Turkey, China etc.

Typically, UK is a steel importing nation with average import penetration levels over 60 percent. Most of UK’s steel imports are from the EU and a smaller fraction from Asia. The rise in feedstock prices, energy costs, logistical bottlenecks, and sanctions on Russia are likely to keep the prices at elevated levels in the short term. EU’s steel exports to UK are also expected to be lower due to decreasing domestic capacity utilization rates.

The UK has its own safeguard tariffs on steel products which was an extension of the EU’s safeguard measures after Brexit. The additional amount of duty applicable to steel goods imported outside of the quota is 25 percent. The tariff-rate quota was effective from July 1, 2021 and is valid until June 30, 2024.

Energy costs -- a critical component for steel-making -- contribute to about 16-17 percent of the total production cost of steel in the EU. Any potential energy disruption could lead to supply shortages for steel, partial plant shutdowns / capacity cuts. The EU has considered multiple steps to diversify the energy sourcing routes, but Russia remains the major energy exporter to the region. The natural gas imports from Russia is over 40 percent percent of the total. And the gas prices always remained sensitive even to the mildest disruption from Russian supply side. On the other hand, UK’s dependency on the Russia energy market is minimal and there are no gas pipelines directly linking the UK with Russia. Imports from Russia made up less than 4 percent of total UK gas supply in 2021.

The impact of Russian invasion is expected to stay strong on the European energy security in the medium term i.e., 4-6 months. The gas supply shortages and price risk would impact all the major consuming sectors including residential sector. Although increased LNG imports is expected in the coming months, Russian supply volume is not easily replaceable. This makes the Russian gas supply variations highly sensitive for the European markets.

This is expected to lead to increased costs of flat steel production and the mills are likely to quote significantly higher steel prices and most likely to add energy surcharges to the product.  The additional charge will be calculated by taking the difference between the average of the monthly cost of gas for the month of shipment of the goods and the average cost in the month when the sale was concluded.

The feedstock scrap and iron ore prices have also witnessed an uptrend considering Russia and Ukraine are key players in the global markets. For instance, Ukrainian miner Ferrexpo Plc alone makes up 4 percent of iron ore pellet supply. The UK scrap prices saw a huge jump of 19 percent during the first week of March when compared to Feb 25.  The iron ore prices (Iron ore 62% Fe fines, cfr Qingdao, $/tonne) reached about $162/MT during the week of March 7.

As on March 15, the EU has imposed import ban on those steel products currently under EU safeguard measures and has announced a redistribution of global quotas to compensate for the unexpected scenario.

Case 1:  The European Union has excluded seven Russian banks from the SWIFT messaging system, but stopped short of including those handling energy payments. Sberbank, Russia's largest lender, and Gazprombank were not included because they are the main channels for payments for Russian oil and gas, which EU countries are still buying despite the conflict in Ukraine. Current level of sanctions and ban on steel imports from Russia as on March 15 holds true. In this scenario it is assumed that there are no additional sanctions on the major banks involved in payments for energy (oil and gas) and that there is sufficient redistribution of steel import quotas under the current safeguard scheme.

Case 2:  This scenario involves strict sanctions being imposed that could ban Russia’s imports including natural gas and metals, excluding all Russian banks from SWIFT system, restricting Russian central bank from accessing its international reserves and secondary sanction on countries (such as India and China for example) which still trade with Russia/ those who have not implemented any trade restrictions on Russia. Although extremely unlikely, if this scenario should occur, it would lead to an unprecedented disruption of global supply chains and EU’s steel trade with other nations, result in record high energy prices. The exact duration and magnitude of impact on the steel prices in such a scenario would be extremely difficult to predict since it could lead to never ending cycle of retaliatory sanctions. This could propel steel prices to catastrophically high levels.

UK: Major Categories affected by sanctions due to Russia-Ukraine conflict under safeguard measures

Given the uncertain duration of the war between Russia and Ukraine, the most likely expectation is for increasing steel prices in the EU until the medium term at the very least i.e., 4-6 months.

Europe depends on Russia for about 40 percent of its natural gas, with most transported by pipeline and it is unlikely that they will impose a ban on procurement in this sector or the banks associated in its payments in the near term/ until they diversify their supply chain considerably.  Considering energy accounts for about 16-17 percent of the production costs of steel, the rise in global prices and possible disruption in supplies from Russia will lead to increased steel prices, with steel mills implementing energy surcharges in the near term. Additionally, Russia and Ukraine account for about 21 percent of its steel imports and the import ban will lead to lack of competitive options, but the safeguard quotas have been adjusted to account for the void left by Russia and Ukraine, which will be balanced out in the long term.

The feedstock disruption from Russia and Ukraine for iron ore, pig iron etc will have an impact on capacity utilization rates in the short term, leading to supply shortages/outages. However, on the demand front, the steel procurement from the automotive sector is expected to be subdued for the rest of the year considering key feedstock for semiconductor chip manufacturing comes out of Russia. With the UK considerably dependent on imports, it is expected UK quotas can be liberalized to allow for import penetration levels of closer to 80-85 percent. Its exposure to Russian origin steel is minimal as compared to its EU counterparts. However, it relies considerably on its trade partners in the EU, and the supply coming out of the EU is expected to be considerably impacted in the near term. The UK’s dependency on the Russia energy market is minimal and there are no gas pipelines directly linking the UK with Russia. Imports from Russia made up less than 4 percent of total UK gas supply in 2021. The short-term impact on steel prices will be quite severe -- both EU and UK will have to diversify their procurement options, and Asian origin steel are the front runners to take up the void left by Russia and Ukraine.