Impact of Female Commercial Truck Drivers on the Trucking Industry

by Gibson M , Research Analyst, Logistics, and Transportation
3 May 2020 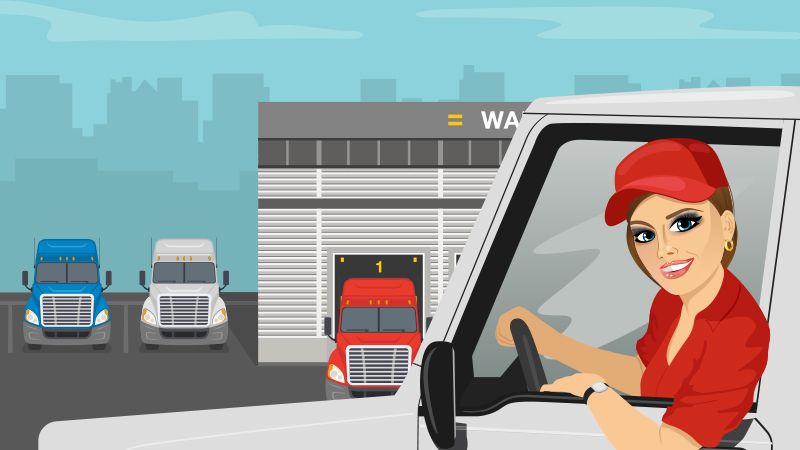 The trucking industry across Europe and North America has seen the issue of driver shortage increase over the last decade. A “dirty man’s job” is how truck driving has been referred to, due to difficulties as well as complexities associated with truck driving. Truck driving has, however, seen a number of women getting involved in recent years across countries, despite it not being a preferred job for women. The industry has also started to encourage engaging of female truck drivers for long and short haul movements. This article talks about the implications associated with the involvement of females in truck driving, the challenges involved on the road for female truck drivers, their growth rate  across multiple regions, and the ensuing benefits for the logistics as well as shipping companies  in the engagement of female truck drivers.

Impact on Shippers and Benefits

Domestic transportation within countries across the globe primarily depends on road freight transport. FMCG, F&B, Retail, and Fashion are among the major industries that make use of trucks for domestic transportation as well as cross-border transportation. Wages contribute to more than one-third of the overall operating cost across countries in the EU, UK, and North America. Despite the economic conditions of countries, truck driver wages continue to increase every year between 2 and 8 percent depending on the country as well as prevailing driver shortage scenario. Engagement of women in driving trucks benefits the shippers on a large scale in two major ways:

Supply-demand is one of the major external factors that impact the overall freight prices in road freight, apart from the operating cost factors such as fuel, driver wages, maintenance cost, and others. The total number of trucks that are available in the market has not been a problem in many countries due to consistent new truck registrations in most countries across the globe. The actual issue has been the absence of sufficient truck drivers to operate the trucks. Engagement of a woman truck driver for every fifth (vacant) male driver position can increase the active capacity by 20 percent.

Over speeding, safe delivery of cargo, and timing of delivery are major factors that impact a shipper’ business while transporting goods by any mode of transport. Engagement of women truck drivers not only provides cost and capacity advantages, but also seems to provide value added benefits in terms of the above mentioned factors.

The domestic trucking industry across the globe has realized the importance of female truck drivers in the road freight industry, and has come up with training programs as well as additional incentives to attract more women to the job. Training methodologies have been introduced across multiple countries to increase the percentage of the total number of female truck drivers, a few of which are given below:

“Train Your Spouse” and “Scholarship Funding” resulted in an increase of the female truck driver population by more than 10 percent, ultimately leading to the current share of 6-7 percent among the total truck driving population.

The percentage of women truck drivers stood at ~1, 4, and 2 percent in Europe, U.S., and Canada respectively before 2010. However, with the increase in the shortage of truck drivers, introduction of training programs for women, scholarships, and incentives, the percentage of female truck drivers has increased to 2, 6, and 3 percent in Europe, U.S., and Canada respectively. With women capable of both long haul and short haul movements, and the industry not being able to find any immediate solutions for the driver shortage crisis, the engagement of female truck drivers is looked upon as a long term solution.

The expected growth rate of female truck drivers in the U.S. is higher than in Europe, thanks to the incentives and interest among women in the U.S. The growth trend highlights the fact that the engagement of women in truck driving is not just a long term solution, but will also see the numbers grow in the future.

The trucking industry is dominated by men across all countries and is unlikely to see any major changes in the short term. The industry is currently going through sweeping changes in terms of technology where automated truck driving is looked upon as one of the major solutions for the future, which can combat the ever-increasing truck driver shortage crisis. However, implementation of such technology is not likely to be imminent.Female truck drivers are looked upon by a lot of companies as a major solution to combat the driver shortage crisis, as highlighted by the increase in the overall percentage of female truck drivers across countries. The industry can also benefit in terms of KPIs such as timing of delivery, fuel efficiency, and safe delivery of cargo by engaging more female truck drivers. However, it remains to be seen whether the industry can attract the desired number of female truck drivers who can disrupt the male dominant trucking industry in the long run.

why aren't men more interested in becoming truck drivers? Why are men such poor drivers as compared to women? It would seem that perhaps paying more money to truck drivers would go a long way to increasing the number of drivers.