Gig economy is a tricky affair for sourcing managers

Gig economy is the latest terminology used specifically for an environment which includes contingent workforce, also known as freelancers, with special skills, talent, and experience in a specific area of expertise. Companies can achieve more innovations in quicker and efficient ways by deploying freelancers for specific tasks. Adopting gig economy also has limitations such as lowered insurance and social insecurity.

Despite some challenges in adopting freelancers, many companies in industries such as Information technology, healthcare and media & entertainment offer varied job roles for freelancers.

As the nature of employment differs, it impacts the changes in recruitment practice. While some recruitment process outsourcing service providers offer permanent job roles, few online marketplaces hire freelancers for crowd sourcing or crowd staffing purposes. Although the methodology includes sourcing, screening and onboarding candidates, it may differ in the sourcing, execution and implementation approach.

The rise of gig economy leads to increase in demand for freelancers. Suppliers are expected to enhance their service offerings for leveraging the hiring practices for freelancers. Although engaging freelancers is beneficial, the misclassification of workforce remains a key challenge for firms. Due to technological disruptions, gig economy may face a situation of constructive disruption in upcoming years.

In this article, we discuss the adoption of gig economy across industries and understand the procurement perspectives of companies engaging with permanent employees as well as freelancers. Also discussed are the various procurement aspects of using online platform to hire freelancers across geographies.

In early 1950s, individuals would exchange services and products with each other on the basis of their necessity and surplus amount of goods, collectively well known as Barter exchange system. In 2017, the barter exchange is emerging again in the form of sharing economy. With advancement in technology, it has become easier for anyone to connect across geographies. Few examples of sharing economy include hiring freelancers for a specific project, knowledge and talent sharing, carpooling, and peer-to-peer lending without involving banks.

Definition of gig economy: Gig economy is a part of sharing economy and the term ‘gig’ is derived from the performances by musicians with their skills, expertise, talent and experience to earn income. Similarly, gig economy involves hiring diversified workers for a specified period, generally short term, for performing project-based work. It is an environment of temporary job positions in an organization to be filled under a contract with contingent workforce such as independent contractors or freelancers for short-term engagements.

Freelancers in gig economy: As per the researchers of The American Law Journal, the contribution of freelancers is expected to rise from 36 percent in 2016 to 43 percent in 2020. Freelancers are also named as human clouds or independent workers depending on the nature of work. They work remotely, on demand for specified tasks, online or offline similar to onsite and offshore for any multinational companies.

As per a Bloomberg report, more than 2.5 million gig economy workers have earned income through online marketplaces such as Airbnb Inc., Etsy Inc., Lyft Inc., and Uber generating revenues of about $15 billion in 2016.

Increase in diversified employment approaches and evolution of online marketplaces supported by Uber and TaskRabbit have supported the growth of freelancers significantly in gig economy.

Currently, around 80 percent of the global population is unfamiliar with gig economy but the number of job opportunities for freelancers is expected to increase and may impact the number of permanent positions across the globe in the upcoming years. As per Deloitte’s report on gig economy, the key regions that are expected to grow with increase in demand for freelancers are India, Australia, South Africa, Brazil, Japan, Italy, Belgium, Netherlands, Spain, the U.S. and some parts of South East Asia by 2020.

Metro cities such as California, Florida and Chicago score high in terms of adopting gig economy workers in the U.S. In California, supervisors have been appointed by the government for monitoring the engagement of freelancers and similar developments have taken place for establishing an employment law in 2016. Support from the US department of Labor and other labor organizations to include the employment rights for freelancers of gig economy is expected in the upcoming years.

Although the adoption of gig economy workers is increasing significantly, the misclassification of workers remains a major concern for companies.

Companies irrespective of the employee size and operations are realigning their workforce with respect to their business objectives. Companies are hiring gig economy workers to achieve tax benefits. Engaging freelancers involve lower employment taxes and no payments in workers’ compensation.

One of the major disadvantages of freelancers in gig economy is dishonesty and illegal work ethics of freelancers. For example, drivers working with a courier company may also work as freelancers for other firms. The trend of dividing the time of work and engaging with more than two employers is increasing. However, it may lead to dishonesty and possibility of illegal and unfair means in delivering work.

One of the major benefits is greater work efficiency and increased work productivity. Companies can leverage the quality of services and innovations from freelancers. With many organizations across industries hiring freelancers, the total spend on contingent work is expected to increase by 2020. The total spend on contingent work across the U.S. was $792 billion in 2016; it is expected to increase by CAGR of 13-18 percent by 2020.

As demand has increased for professional network, many Fortune 500 companies are sourcing talent on assignment basis due to shortage of skills in-house. Also, hiring freelancers will not disrupt the recruitment strategies and business alignment of any organization. The three prominent industries adopting freelancers in gig economy are IT, Healthcare and Media & Entertainment. The companies expected to hire freelancers in 2017 are as follows:

BBC Worldwide and Razorfish use Flex jobs – an online platform for hiring freelancers in gig economy.

In 2017, many companies are expected to shift 20 percent of their existing permanent job positions by contingent work in order to enhance the quality of services and innovations delivered at about 27 percent reduced costs. This trend is expected to rise with the increase in freelancers by 2020. The comparative study shall help a buyer in considering a balance of diversified workforce within the firm.

Adoption of gig economy: Whether a buyer should hire permanent workforce or freelancers in gig economy? 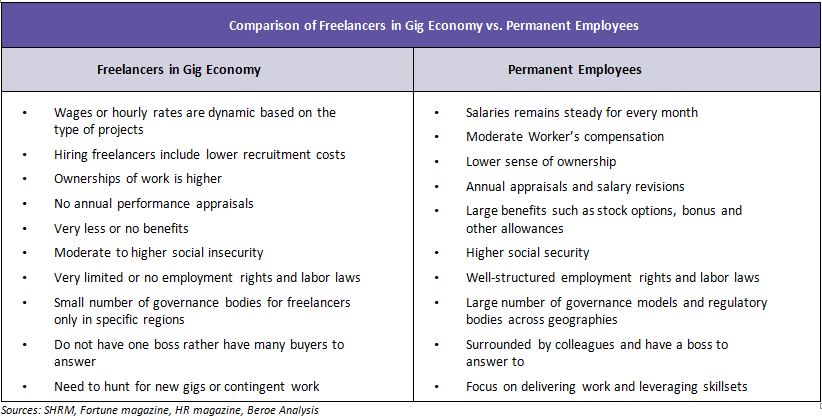 Case Study: A leading software company hired freelancers and permanent payroll employees working next to each other with similar job descriptions. While employees were getting lucrative stock options, freelancers were not getting any benefits. In such a scenario, misclassification can lead to insecurities and dissatisfaction among both the type of workers.

Change in recruitment practices for freelancers

Since the nature of employment, wages, legislations, and skillsets differ between freelancers and permanent employees, recruitment agencies are leveraging their service capabilities to cater to freelancers as well as permanent employees. Many staffing firms such as Randstad, Adecco and Manpower Group provide integrated workforce solutions for hiring diversified workforce. There are also several online platforms dedicated only for crowdsourcing and crowd staffing of contingent workers in gig economy.

Engagement strategy for companies to work with freelancers

In gig economy, companies can engage with freelancers in two possible ways -- term based or project based. Term-based engagement strategy includes contingent work on the basis of tenure required to accomplish the task. In this type of engagement, freelancers are hired for a specific tenure for performing a list of activities within the organization. Companies in the media and entertainment industry are more prominent in adopting term-based approach for hiring freelancers.

Project-based engagement strategy is widely adopted across IT and Healthcare industries. Typically, in this type of engagement strategy, IT companies outsource a project with a list of activities for a specific period of time. This approach is more prominent as it involves higher skillsets and expertise.

Companies focus more on understanding the key procurement aspects of engaging with freelancers in gig economy for cost optimization, higher labor productivity, speeding up the process of the tasks or activities. Sourcing strategies depends on the nature of the contingent work required by the firm and availability of talent in the labor market.

Global Sourcing strategy is more prominent as it leverages the scope of higher quality of services as compared to regional approach. Companies use online platforms to source freelancers globally and for regional engagement, they choose temporary agencies or freelancers directly.

How the hiring process differs for freelancers in gig economy?

Online Platforms such as Jobhuk, Recruit Alliance, Smart Recruiters, Search Party, Zenith Talent, Upwork, Toptal, and HireQ Inc. provide a virtual workplace for freelancers to work from anywhere in the world. Virtual workplace ensures the engagements between freelancers and employers for the purpose of contingent work. This approach is widely adopted for job roles such as software developer or system administrator in IT functional job roles.

Buyers can pay only for the contingent work and additional costs such as worker’s compensation or any other allowances are not applicable for freelancers.

A pharma company was seeking support to improve its recruitment approach to optimize recruitment spend.  It engaged with a B2B sourcing channel and implemented data-driven recruitment marketing and initiated sourcing and screening of potential candidates. The company realized 30 percent reduction in recruitment spend and increased quality of hire.

Decision factors: Buyers shall focus on balancing diversified workforce with the nature of employment

Absence of resources for specific or quick tasks may encourage a firm to hire freelancers.

Many job roles and responsibilities are difficult to define and require specialized set of skillsets to deliver the projects. In such cases, companies define the job roles for contingent work and permanent work to balance the diversified workforce within the firm.

Multinational companies incur relocation costs and cross cultural training expenses when they send their workforce to a buyer’s base. This could be avoiding by hiring freelancers within the specific location. As freelancers can operate from remote destinations, onsite job opportunities are expected to be taken over by freelancers in a gig economy.

The aspects of HR, technology, nature of employment and sourcing approaches are increasing the demand for gig economy. Engaging with freelancers brings in a wide range of benefits for buyers including access to specialized talent and cost optimization, however, reliability remains an issue. Companies are expected to adopt online platforms and suppliers are expected to evolve along with technological innovations in their existing services for better and higher engagement with freelancers.

Diversification of workforce is necessary to achieve a competitive advantage. The number of job roles and their responsibilities for contingent and permanent positions need to be balanced and well aligned with the business objectives of the company. A lack of balance or clarity in job roles may lead to dissatisfaction among permanent employees of the company.

The decision of hiring freelancers while enhancing a company’s bottom line may also result in a situation of wrong decisions but good deeds; a situation well known as constructive disruption. Also, gig economy may impact the number of permanent job positions in the global economy.

The question that hovers now is whether the rising gig economy will create more opportunities for freelancers or restricts companies in engaging with them.