The Chinese government implemented the “Dual Control “policy to limit energy consumption and reduce energy intensity. Vigorous enforcement of this measure led to a severe power crunch, which, in turn, had a significant impact on various industries, including magnesium. China holds a monopolistic position in the production of magnesium and the recent power curbs in China have crippled the global magnesium supply chain.

The European automotive industry is the worst affected, as 95 percent of its imports are dependent on China and thus, a drastic downfall in the supply of the material from China since September 20, 2021, immensely disrupted the European magnesium supply chain.

This article delves into the lingering power crisis in China, dwindling magnesium supply and its impact on the auto industry.

China controls the production of critical raw materials (steel, magnesium, manganese, molybdenum, rare earths), and thus its dominance has been a sign of concern for various countries, like Europe and the US. In case of magnesium, China by far controls 87 percent of its global production.

The Chinese government’s control on energy intensity was first proposed way back in 2006, during the country’s 11th Five Year Plan (FYP). The Chinese government thus introduced various plans to reduce the energy intensity, to curb emissions. The policy on energy consumption was first introduced during the 13th FYP in 2016. The COVID-19 pandemic worsened the woes, wherein several provinces found it highly challenging to meet the targets.

China’s stringent enforcement of energy control policies has forced all the magnesium producers in Fugu and Shenmu counties of Yulin city, Shaanxi province to suspend/reduce their production to achieve energy targets for 2021. Such supply shortage has, in turn, affected the key downstream industries, particularly the auto sector, which majorly consumes magnesium for producing aluminum alloys.

China continues to hold a monopolistic position in the magnesium market, occupying nearly 87 percent of the global market share, in terms of production. Shaanxi and Shanxi provinces in China remain the world’s largest production hubs for magnesium. Fugu county in Yulin, Shaanxi Province contributes to nearly 65 percent of the country’s total magnesium output.

Magnesium in China is produced using the pyrometallurgical Pidgeon process, which is highly energy and labor-intensive. China produced 961, 000 MT of magnesium metal in 2020, declining by 1 percent as compared to 970,000 MT in 2019, as production levels in the country recovered in April 2020, post the control of COVID-19 pandemic spread.

The National Development and Reform Commission (NDRC) of China on September 16, 2021 proposed a scheme, with an aim to improve the “Dual Control Policy”, a policy that is directed towards limiting the energy consumption and to reduce the energy intensity, thereby curbing the country’s emissions.

Several provinces were at higher risk of power rationing, and the power restrictions significantly impacted the industrial activities and the economic growth of the country. The major reasons behind the power rationing are likely higher coal prices and energy/emission goals. China’s environmental inspections on coal mining highly disrupted the regional production of coal, thereby weighing on the domestic coal prices. On the other hand, imports also took a major hit, due to Beijing’s ban on coal imports from Australia, heavy floods in Indonesia, and the sudden increase in the pandemic outbreak in Mongolia.

Energy-intensive cement and metal industries, alongside fertilizer production, are some of the sectors that were heavily impacted by the power outages. The power outage is expected to aggravate further, owing to the approaching winter in China. Hence, to avoid any untoward incident, the country is currently working on ways to increase the imports and has directed the state-owned mining companies to expand their coal production.

Power-intensive magnesium production also took a major hit, with few smelting plants forced to shut down and with some operating at reduced rates. Orders issued by the Chinese National Development and Reform Commission to Yulin’s magnesium industry, impacted approximately 40 producers, owing to which, Yulin’s magnesium output for September 2021 decreased by 6 percent, as compared to August 2021 and averaged at 34,900 Metric Tons. In October 2021, the smelters are expected to resume production, but the Chinese magnesium sector’s market outlook remains uncertain.

China’s magnesium smelting capacity is thus witnessing a slump, in a view to achieve the targets related to energy consumption. China’s magnesium supply crunch has, in turn, affected the global supply chain, with countries, like Europe, running out of the material and could likely get exhausted by late November (as Europe is highly dependent on imports from China). 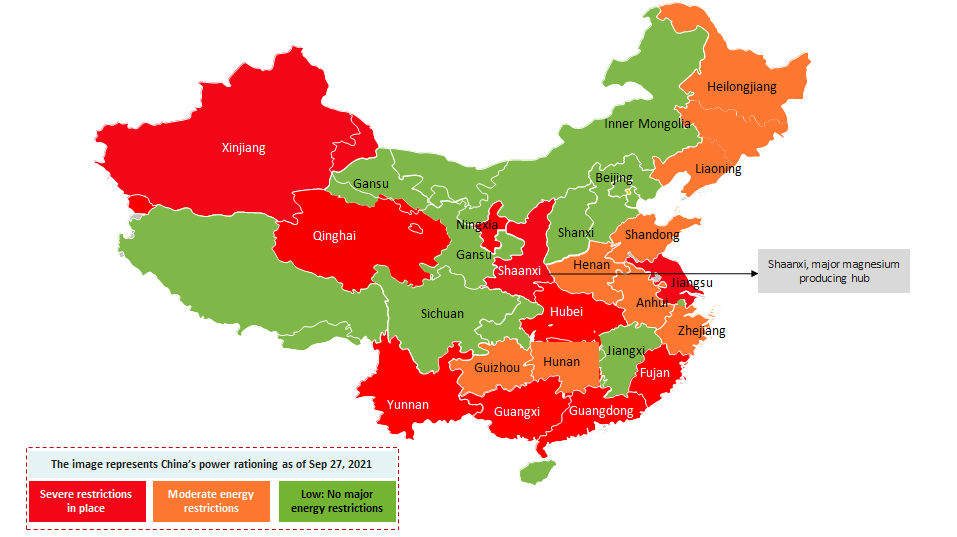 Magnesium is a key ingredient that is used as an alloying agent in the production of aluminum alloys. Lingering disruptions to the supply of magnesium, immensely threaten the auto industry, as aluminum alloys go into the manufacture of various automotive parts, like gearboxes, seat frames, steering columns, fuel tank covers.

Global automakers, who were reeling under the pressure of semiconductor shortage, are now facing serious disruptions to their production plans, due to the supply shortage of magnesium, thereby causing a great setback to the growth of the global auto industry. The European magnesium supply chain posed a serious risk, whereas the US remains marginally affected, as it has a diversified supply base in Mexico, Canada, and Israel. Top auto firms, like BMW, Stellantis, currently hold enough inventories, whereas Volkswagen is expecting an inventory crunch shortly. German-headquartered ZF Friedrichshafen AG is scouting for other new magnesium sources, as the current supply chain issue shows no signs of abatement.

The European automotive industry is the worst affected, as 95 percent of its imports are dependent on China and thus, a drastic downfall in the supply of the material from China since September 20, 2021, immensely disrupted the European magnesium supply chain.

Germany and Italy, the leading car manufacturing hubs in Europe, were highly concerned about the lingering magnesium shortage. With Europe’s magnesium stocks anticipated to get exhausted by November-end, massive losses to the auto business and employment are likely to occur in the country. 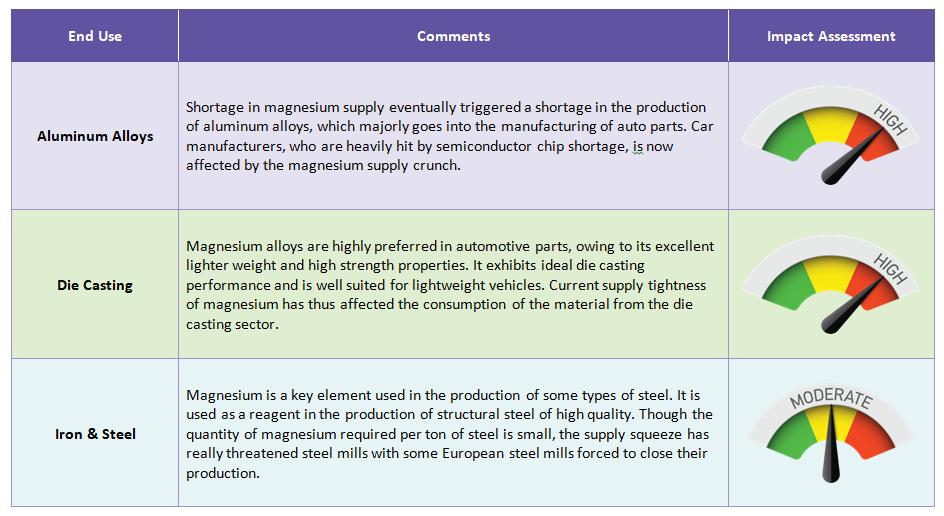 Chinese magnesium prices witnessed a sharp surge, underpinned by restricted operations at smelting plants in Shaanxi province, the key manufacturing hub in the country. Prices for magnesium 99.9 percent EXW China increased by an alarming 46 percent in September 2021 and averaged at CN¥42,552/ton.

Export prices from China also rose significantly in a very short period and remained a huge threat to the overseas buyers of the material. European magnesium 99.9 percent min prices hovered at €5285.98/ton in September 2021, an increase of 39 percent as compared to the prices in August 2021.

The US magnesium 99.9 percent FOB prices hovered at $6,232/ton in September 2021, an increase of 21 percent as compared to the prices in August 2021. Prices in the US increased, owing to tight market supply, underpinned by lower production levels in China. In the US, annual contract negotiations are likely to get dragged further, due to exorbitantly rising global prices.

Magnesium Supply Crunch and its Impact on Procurement

In September 2021, key downstream consuming sectors of magnesium reeled under extreme pressure, as magnesium shortage resulted in production curtailment. Ongoing energy crisis and magnesium shortage triggered a negative impact on the entire supply chain and the global economy. While few major companies held enough inventories on hand, several companies struggled to run their operations, as magnesium is difficult to be replaced by any other alloying material. On the other hand, lead times also increased sharply, as the supply chain was impacted by a rise in raw material costs and shortage of shipment containers. As China dominates the global magnesium production, the supply threat has thus created a challenging environment for several key importing countries, particularly Europe. The European Union held talks with China to help mitigate the supply issue and also elaborated the consequences faced by European industries.

Power rationing in China is emerging as a serious cause of concern to the global economy as a whole. The Chinese magnesium production that came to a halt in September 2021 posed a real threat to the global auto industry. Various auto companies bore the brunt of rising costs of aluminum alloys, in turn, leading to higher costs of production. Rising prices and supply deficit show no signs of abating and are likely to continue in the short–medium term. Europe that is severely affected by the supply squeeze must work on a steady strategic roadmap to curb its dependency on China and to restart its domestic raw material production, including magnesium.