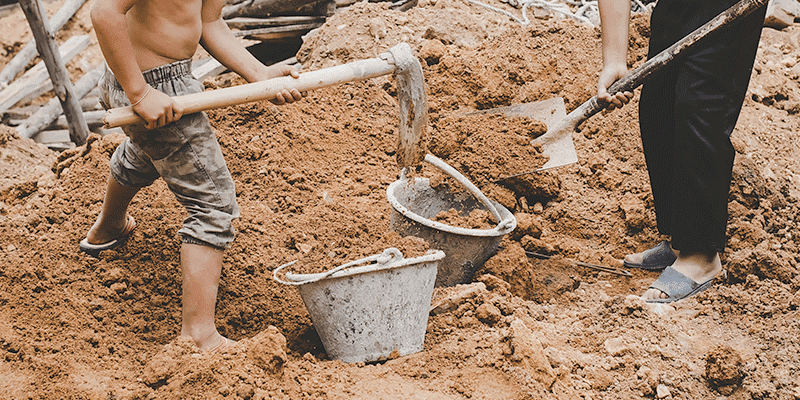 Rechargeable batteries have seen an upsurge in demand due to the increased use of smartphones and the hype around electric vehicles. Along with the demand for batteries, the mining and trading of cobalt have risen. Cobalt is an important raw material used in manufacturing Lithium Ion batteries. To meet the ever-increasing demand for cobalt, children from low-income economies are sent into mines rather than schools to meet the demand. Major economies and governments are implementing laws and regulations against the exploitation of children, but they are neither properly implemented nor monitored. Due to the lack of adequate rules and regulations, children in low-income economies can be easily exploited.

This article highlights how children are exploited in a pursuit to meet the global demand of cobalt. It discusses in detail the conditions in which the mineral is mined, why child labor is being used and suggests a possible solution to eradicate the issue.

Kolwasi is a small town in Congo that is built around major industrial copper and cobalt mines. In mid-2014, the residents of Kasula neighborhood, in Kolwasi, discovered that a rich stream of cobalt ores run underground. Although mining in the neighborhood is illegal (as Kasula is not a designated artisanal mining zone), local residents, as well as thousands of miners who had migrated to the region, have dug hundreds of ‘rat-hole mines’. Sometimes, mines are dug inside a house. The mines run more than 30 meters in depth. Miners work barefoot and use ropes tied to wooden planks to climb in and out of the mines. These mines are unprotected, and there are high chances of accidents due to cave-ins and, to overcome the fear of accidents, the miners resort to alcohol. The only tools used for mining are mallets, chisels and shovels with no basic protective gear like gloves, boots, and face masks.

Kapata is a township that was originally designed for mine workers in the outskirts of Kolwasi. The region has a lake where hundreds of people, including women and children, wash and clean cobalt ore that was scavenged from the adjacent industrial mining concessions. It is common to see children between the ages of 6–17 working here. These children wash the ores with their bare hands, which have led to an increase in reported skin infections. On any given day, these people wash 8–10 sacks of ore, each weighing close to 50 kg for 1,500 Congolese francs (~ $1.5 per day). The cleaned mineral is then sold to traders in the nearby market who sell the ores to smelting facilities.

Cobalt, a hard, lustrous, silver-grey metal is one of the most important raw materials that power the Lithium Ion battery. It is a naturally occurring mineral mostly found in combination with nickel and silver. After mining and processing, cobalt may end up in smartphones, electric car batteries or any other rechargeable battery. In recent years, the demand for portable electronic devices and rechargeable batteries has increased, which has, in fact, led to an increased demand for cobalt. It is expected that the demand for a cleaner energy source will further increase the demand for cobalt, due to its use in Lithium Ion batteries. The popularity of electric vehicles also increases cobalt demand, which is expected to rise at a compound annual growth rate (CAGR) of 9 percent from 2016 to 2022. Currently, 50 percent of the total cobalt produced is used in batteries; however, other end uses include superalloys, hard metals, and catalysts.

Batteries rich in cobalt are expected to be a greener substitute for traditional lead-acid batteries, as they are smaller and hold more power. As governments worldwide push towards greener and cleaner fuel, cobalt is becoming a highly sought-after metal that could phase out petrol and diesel through the use of electric vehicles. However, behind the clean and green initiative, there lies a dark truth that many chose to ignore.

More than half of cobalt mined globally comes from a small country situated in Central Africa whose economy has been crippled due to years of war—Democratic Republic of the Congo (DRC). DRC supplies 58 percent of the world’s cobalt mining reserves. The current cobalt market outlook and extensive availability in Congo should be captivating for the country but it is not the case. Recent investigations carried out by Amnesty International and CNN brought to light the horrors of cobalt mining in Congo. According to government estimates, 20 percent of the cobalt supply comes from artisanal mines that rely mainly on human muscle rather than updated mining equipment. These mines are illegal and do not follow any safety guidelines for the mining process. A majority of the mining is done inside nonreinforced tunnels in which the miners use their hands, pickaxes, or shovels to obtain the mineral. According to recent findings from UNICEF, there are 110,000–150,000 artisanal miners in Congo, out of which 40,000 are children between the ages of 5–17. The recent reports and investigations have concluded that the cobalt supply chain is guilty of using child labor in the mining processes.

The government of Congo has strict laws against child labor in any form but they are not effective because the country is poverty ridden. Children go to the mines rather than school to earn an income. Although market observers suggest that the expected surge in the demand for cobalt will boost the economy of DRC, in reality, the child workforce is paid less than $2 a day for nearly 12 hours of work.

Although industry giants like Apple, BMW, Mercedes, and Samsung have spoken against the use of child labor in its supply chain, very little work and thought has gone into finding a solution. The major problem lies in the transparency of the supply chain. Downstream companies (like Apple and Samsung) have no clear way to identify if the supply chain consists of cobalt from artisanal mines. The region’s largest producer of cobalt is Congo Dongfeng International, which is a wholly owned subsidiary Zhejiang Huayou Cobalt.

The cobalt mining supply chain consists of industrial miners, artisanal miners, traders, smelters, chemical manufacturers, battery manufacturers and end users. Industrial miners extract the mineral in their mines and sell it to smelters for further processing. The supply chain from industrial miners to smelters is transparent and does not employ children for mining purposes. However, this is not the case for artisanal miners. Artisanal miners sell ore that contains cobalt to local traders. Congo Dongfeng International buys the majority of the ore from the traders and, after smelting and refining, cobalt is sent to the holding company in China. Zhejiang Huayou Cobalt further processes the mineral then sells the ore to consumer electronics companies, which, in turn, use the cobalt in batteries and sells the final products. Due to the involvement of many middle-level players, like traders, it is hard to assess whether cobalt from artisanal mines has come into the supply chain.

Cobalt, currently trading at $80,000 a ton, has led to an increase in mining in the Katanga region. To maximize profits, cobalt companies rely on artisanal mining, which employs cheap labor. A child working in the mines is offered only $1.5–$2 a day. Capital expenditures are lower because the miners use only manual tools like shovels, pickaxes and mallets, rather than expensive industrial equipment, in the mining process. Children are sent into mines that are not reinforced and must work in the dark with barely any protective gear. They are considered an expendable workforce. Reports state that few companies are shifting their focus towards industrial miners, as artisanal miners are a cheap form of labor. The residents have no other choice than to send their children to work in the mines rather than to school.

The minimum age for working in DRC, according to the Labor Code of 2002, is 15 and the age limit for hazardous work is 18. Forced labor and child labor are prohibited under the Labor Code and individuals or corporations breaking the law will be penalized. However, the Labor Code is applicable only to children forced into labor; it does not protect children who are self-employed and are at risk of being exploited. According to Ministerial Order No. 68/13 of 1968, it is illegal to employ children for the extraction of minerals and debris from mines and quarries. It is also illegal to use children under age 18 for transporting heavy loads and working underground, underwater and at dangerous heights, according to Ministerial Order No. 12 of 2008. Children under age 11 have been offered free education since 2010 outside the provinces of Kinshasa, Bas Congo, and Katanga. It is unclear why these regions are not offered free education. There are chances of children entering into mining labor, as the law is not implemented systematically. The cost of books and uniforms are high, and it deters student enrollment. The lack of clear rules and regulations shows that there is a potential for exploitation of the workforce. Also, the lack of awareness among the miners regarding the quality and quantity of the ore they sell to the traders worsens the situation.

Cobalt is not listed under conflict minerals, such as tin, gold, tantalum, and tungsten. Hence, there are no regulations that directly cover the global cobalt market. Without regulations and laws that require companies to disclose their supply source, it is difficult to eradicate the problem at the root. However, due to the recent revelations from activists linked to UNICEF, Amnesty International and various news channels, corporations will have to take action, which could give greater visibility into the global cobalt supply chain. Few positive steps have been taken as a measure to abolish child labor in cobalt mining. Companies like Apple and Samsung SDI have asked their suppliers to complete thorough background checks on all traders involved in cobalt mining, demanding greater transparency. Simply refusing to buy cobalt from artisanal mines will not help, as cobalt is a highly sought-after mineral.

Due Diligence Is the Key

Due diligence can prevent the use of child labor in cobalt mines. Companies that use cobalt as a raw material should conduct background checks on the smelters that refine cobalt, as well as the industrial and artisanal mines that extract the ore. They should study the conditions in which the ore is mined and only buy from the trading houses or smelters that stick to the process. During a due diligence process, the cobalt supplier would have to reveal the condition of the workforce, the machines or equipment they are using, the mines where the cobalt comes from and the conditions in which the mineral is mined. This would highlight the areas in which the workforce could be exploited, and appropriate action can be taken.

The demand for rechargeable batteries will increase globally and cause an upsurge in the need for cobalt. DRC is looked at as a major sourcing country for the cobalt supply. There are chances for children to be exploited and used in the mining process to meet this demand. To prevent this situation, government authorities and corporations should ensure that the cobalt supply chain is transparent and free from child labor. They should also enforce laws against the companies or individuals involved in using children as a workforce. The change in working conditions will take time but if adequate steps are taken, child labor can be abolished in the mining industry.