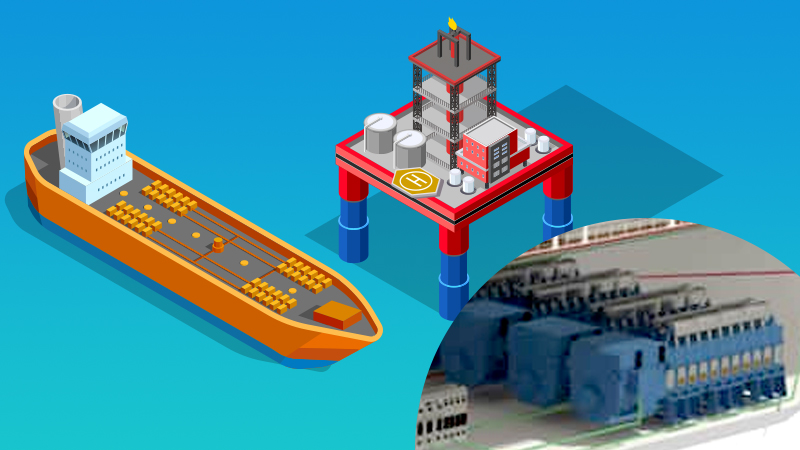 Batteries for Marine Propulsion are gaining increasing interest as a viable solution to reduce CO2, SOx, and NOx emissions. Recent developments in battery technology for marine applications have significantly increased vessels’ efficiency and safety while reducing operating costs. Moreover, batteries are more controllable and easier to optimize in terms of performance. In an offshore support vessel, the common diesel-electric propulsion system operating at low loads for extended periods is inefficient. Therefore, using a battery during low loads and switching to diesel-electric propulsion for peak loads can improve the vessel’s performance and reduce fuel consumption. Battery systems also act as a backup power supply during the redundant power requirement for dynamic positioning (DP). The conclusion from the FellowSHIP project—a joint research and development project initiated by DNV, Eidesvik, and Wartsila on the offshore support vessel, Viking Lady—showed some positive performance in terms of reduced emissions, increased efficiency, and lowered operating expenditure. It is expected that another 19 newly built battery-powered offshore support vessels will be added to the market by 2026.

The use of lithium-ion batteries since their commercialization in the 1990s was first driven by consumer electronics and later adopted by the automobile industry. The usage of lithium-ion batteries for maritime application began in the late 2010s. Maritime battery systems typically consist of several thousand cells and come in three formats: cylindrical, large format prismatic, and soft pouch. In general, the enclosure will be steel or aluminum for the cylindrical format, aluminum plastic steel for prismatic format, and multi-layer laminate pouch for soft pouch format. Chemical and material compositions are important aspects of characterizing battery performance. For maritime applications, Li-NMC or (NCM) composition is widely used due to its high specific energy and easy customization. 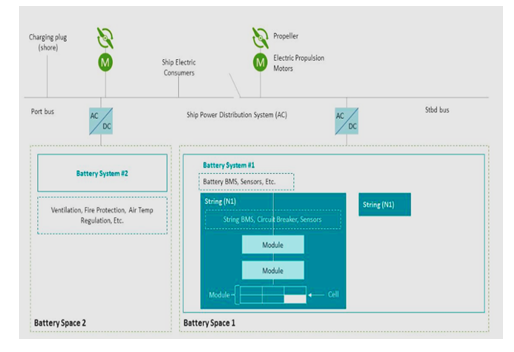 Along with the performance benefits, the offshore support vessels with batteries have higher likelihoods of receiving a contact compared to traditional vessels due to the former’s reduced local emissions and higher efficiency.

Fuel cost is the major cost component in the operating expenses for an offshore support vessel. Considering IMO 2020 rules, low sulfur fuel requirements may increase fuel cost by 30–50% over the next decade. This can be eliminated by hybridizing the vessel. Hybridization of offshore vessels with batteries may provide fuel savings of 10–40%. The return on investment for the battery system is being accelerated by reduced battery prices. The lithium-Ion battery prices have dropped by approximately 50% compared to the price in 2016 and, at the same time, significant performance improvements have been observed. It is estimated that the prices of a battery system for offshore support vessels would drop by more than 80% by the end of 2030. Therefore, reduced battery prices, strict regulations, and increasing fuel costs along with support from government and major oil companies will drive the use of batteries for the offshore support vessels.

FellowSHIP project, a joint industry research and development project was initiated by DNV, Eidesvik, and Wartsila and funded by the Research Council of Norway, Innovation Norway, and the Eureka network. Viking Lady, a platform support vessel, was installed by a fuel cell and dual-fuel liquefied natural gas (LNG)/diesel-electric power plant. Simulations were performed to gain insight into the actual operation of a maritime battery system. Using this data, a variety of simulations were performed, concluding that for a period of 50,000 ship operating hours, fuel consumption can be reduced by 1,700 thousand gallons, efficiency can be increased by 21%, emissions can be reduced by 24%, CO2 can be reduced by 20 tons, and more than $5 million can be saved in operating expenditure. To install the system and make modifications, capital expenditure of approximately $0.78 million is required.

In the near-term, significant increase in battery cycle life, power & energy density, and lower costs will rapidly increase usage of battery power for offshore support vessels. However, battery-powered offshore support vessels need the validation of economy, safety, and reliability as the market is still in the introductory stage. Once this is achieved, significant market penetration and large savings in terms of environment and economy can be recognized.