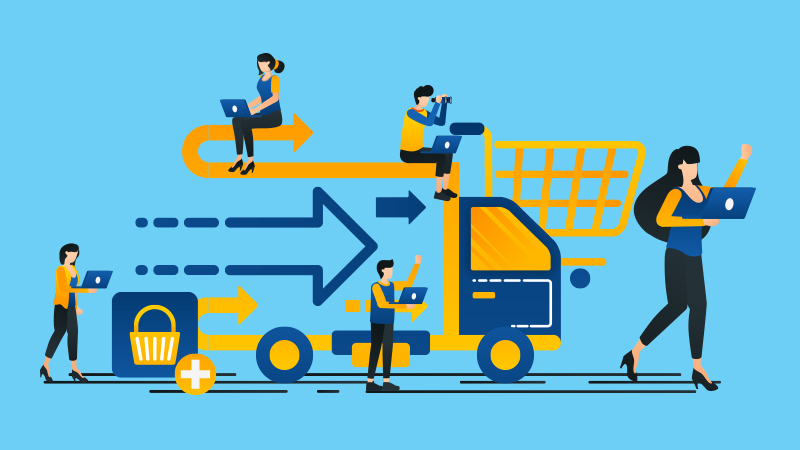 The logistics industry is becoming more and more technology-based with technology providing advantages in terms of cutting costs, increasing speed, and serving as an ideal platform for the fast paced e-commerce industry. With logistics ripe for technology-driven disruption, Amazon, which leverages technology better than any of its peers, is likely to disrupt the market by means of its logistics service. Amazon has made its logistics presence felt by entering into trucking and adding airplanes to serve air freight mainly for its own delivery requirements. The company’s push toward controlling the front, middle, and back-end logistics network to ensure that its parcels (Amazon Prime orders mainly) are delivered on time means that its dependency on third-party logistics service providers will continue to decrease gradually.

This article describes Amazon’s entry into logistics and its capability to leverage technology to control entire end-to-end delivery operations of its products. The article also discusses the possibility of Amazon becoming one of the leading logistics’ service providers in the U.S. and its impact on the future of logistics.

Amazon, which started as a single cell book-selling website in the 1990s, has diversified its portfolio and has built the world’s largest online store.

The company can deliver almost anything to its customers in a single day by leveraging internet and technology and has changed the purchasing behavior of people around the globe. The company has changed the face of the retail business wherein many companies are now moving toward e-marketing to sell their products online.

The company has diversified its products into various categories that include media, apparel, and baby products, consumer goods and many others, with Amazon’s operating strategy shifting from online retailer to B2B service provider. While the company’s strategy has seen technology as its core, its entry into logistics has expanded its service portfolio further.

The company has been dependent on third-party logistics’ service providers for ensuring on-time delivery to its consumers. Dependency on the third-party service providers has had its own impact on Amazon’s business in terms of delivery costs, the timing of delivery, and customer satisfaction. The entry of Amazon into logistics services will benefit the company in controlling its operations on a large scale and will also reduce its dependency on other logistics service providers. The company has more than 300 fulfillment centers in multiple countries across the globe with more than one-third located in the U.S. making it Amazon’s largest market. The company’s overall footprint is more than 250 million sq. ft., including the warehouses and fulfillment centers; with e-commerce set to grow further, the company’s footprint is set to expand further by more than 40 million sq. ft. in the future. The company also has 32 cargo planes in addition to the purchase of thousands of trailers since 2005; their number is currently unknown with the industry saying that the company has ~300 units.

Impact of Amazon on Logistics

The company has plans to reduce the dependency on established service providers for its last-mile delivery. Amazon logistics, which has been in operation for some time, is trying to make use of local companies for last-mile delivery in the U.K., not only saving costs but also reducing dependency on established service providers.

The shipping costs of Amazon were $11.5 billion, $21.7 billion, and $30 billion in 2015, 2017, and 2018, respectively. The continuous increase in shipping costs has resulted in Amazon trying to control the end-to-end operations for delivery of its products. The pilot shipping program of Amazon “Amazon Shipping,” offered steep discounts with sellers experiencing rate variations of 50 and20 percent when compared with UPS and FedEx, respectively. While Amazon has played this down, stating that the service was only to complement its existing partners, the pricing strategy is seen as an indication to go beyond those partners.

Key selling points of “Amazon Shipping” are as follows:

The rates provided are viewed as promotional rates for the initial stages and are expected to rise, but any small discount coupled with 24-hour pickup is enough to give Amazon Shipping the upper hand in the business. Apart from these selling points, the raise in minimum wages by Amazon for its truck drivers in the U.S. is also likely to impact the availability of drivers for other service providers. 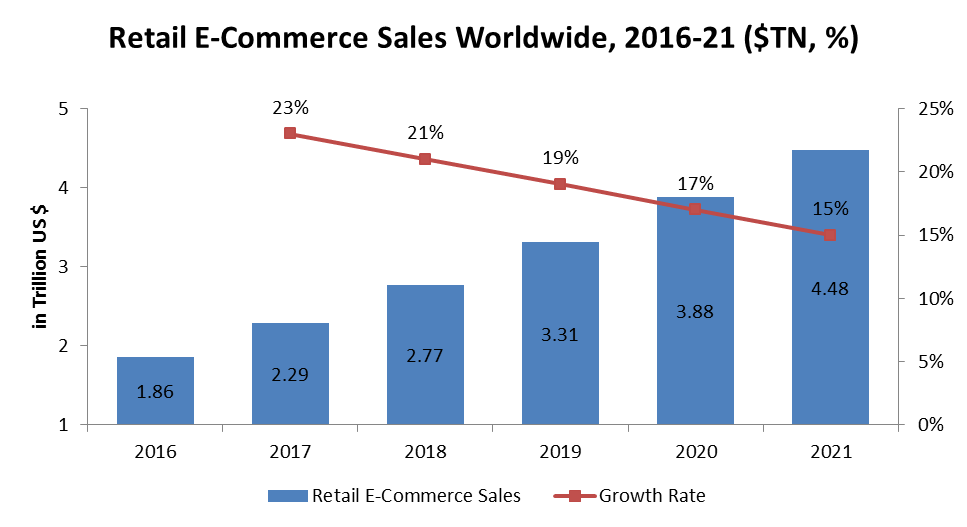 Impacts and Benefits of Amazon Operating as a Logistics Service Provider

The increase in the footprint of the company in terms of distribution facilities, fulfillment centers, and space can be easily viewed as the company’s strategy to expand its business. However, it is hard to ignore the fact that Amazon is sooner or later likely to enter the logistics industry, with the company registering itself as an NVOCC in late 2016. Adding to this is its increase in assets in terms of aircraft as well as commercial vehicle units. While the logistics companies will see their business from Amazon decrease, the companies are also likely to see shippers who are not part of Amazon tempted to make use of its logistics business in the future. Amazon is not currently a threat to any logistics company, but its logistics business is likely to have an impact in multiple areas, as highlighted below:

Can Amazon Logistics Really Benefit the Shippers Who Are Not Part of Amazon???

The above numbers are an indication of how the company has grown in terms of logistics operations since 2013, when all of its shipping operations were outsourced. The share of Amazon’s shipping in UPS also decreased from 49 percent to 22 percent while that of FedEx was diluted from 9 percent to less than 3 percent in the last six years. This gives an indication of how the company has taken logistics seriously.

Amazon has invested in trucks and has also welcomed entrepreneurs to become Delivery Service Partners (DSP), who are willing to invest ~$10,000, manage 40 vans, and also ensure package delivery 365 days a year. The model ensures same-day delivery, but the utilization rate is the major problem. Increasing the utilization rate of the trucks by mixing outbound shipments of Amazon with third-party delivery products is an area of benefit for shippers who are not part of Amazon. This model ensures faster movement for third parties, while Amazon also gets the desired result of increasing the utilization rate and lowering shipping costs. The model requires investment in technology and Amazon is among the top players when it comes to leveraging technology for its service benefits.

a) Consolidation as a Potential Advantage for Amazon

Amazon has a supply chain facility of more than 1.4 billion sq. ft., which is a potential area of consolidation for shippers in case of Amazon being willing to leverage its resources for logistics services not aligned to its delivery. The individual packages of multiple shippers can be consolidated into a full truckload, moved to its destination facilities, and delivered using its last-mile delivery services. Amazon has multiple advantages such as

b) Increase in Capacity of Vans and Delivery Trucks

Amazon’s shipping costs were consistently on the rise with the company initially depending on companies such as FedEx and UPS for last-mile deliveries. However, the company’s move toward investment in assets such as delivery vans and trucks has lowered the company’s shipping costs. The company has ordered the purchase of one lakh of electric vans that are likely to become fully operational by 2030. This investment is likely to increase the company’s market capacity in terms of delivery vans, thereby making the prices more competitive. Amazon’s investments were initially to meet its own requirements, but the lower utilization rates and empty back-hauls after deliveries create advantages for Amazon as well as the third-party shippers. Amazon’s higher pay scale is also likely to attract more drivers to the company when compared with its competitors, which is also likely to ensure a consistent supply of delivery vans/trucks from the company.

Trucking freight rates have been volatile in recent years with spot freight rates in 2019 dropping by more than 50 percent compared to 2018, despite a shortage of truck drivers. However, the entry of Amazon into logistics has the potential to reduce the overall market freight rates, mainly in the courier and parcel market. “Amazon Shipping,” the company’s pilot program saw freight rates 50 percent cheaper when compared to established players such as FedEx and UPS, who are, incidentally, major service providers of Amazon itself. While Amazon has the capacity to provide similar services at lower rates, it remains to be seen if the company can provide lower rates for a longer duration, for a large group of suppliers. However, the shippers are likely to be the end beneficiaries as the impact of Amazon in transportation will push down the rates, at least for the short term.

Amazon has long been known for its two-day delivery service, which has ensured delivery of products within two days to its Prime users. It has long been possible due to a combination of technology, its extensive network of warehouses, multi-tier inventory management, and well-planned transportation services: in short, efficient supply chain management. Extending the same set of services by picking up and delivering other shippers’ packages will improve the speed of services, while decreasing the business volumes of 3pl service providers. The impact was felt by XPO logistics, which is among the leaders of last-mile delivery, where the company slashed its 2019 guidance, which, ultimately, is likely to lead to XPO losing $600 million in annual business. As the trend indicates, the entry of Amazon into the sector is likely to disrupt multiple facets of the logistics industry.

Amazon introduced a pilot program named “Amazon Shipping” where the prices were 50 percent cheaper when compared to proven players like UPS and FedEx. The company also mentioned in its 2018 SEC filing that the company faces intense competition from transportation and logistics companies. The impact of the announcement was felt recently in August 2019 when FedEx ended its ground delivery contract with Amazon. All the signs point to the fact that Amazon has taken the logistics business seriously and competitors are also well aware of the threat Amazon poses as a logistics service provider. The overall impact will be felt in the packaging/courier industry in the upcoming months, and the benefits are more likely to be enjoyed by the shippers in terms of two major aspects in the U.S.: 1) freight rates and 2) delivery time.