Supply Surplus of Explosives in Australian Market to Continue till 2024, says Beroe Inc 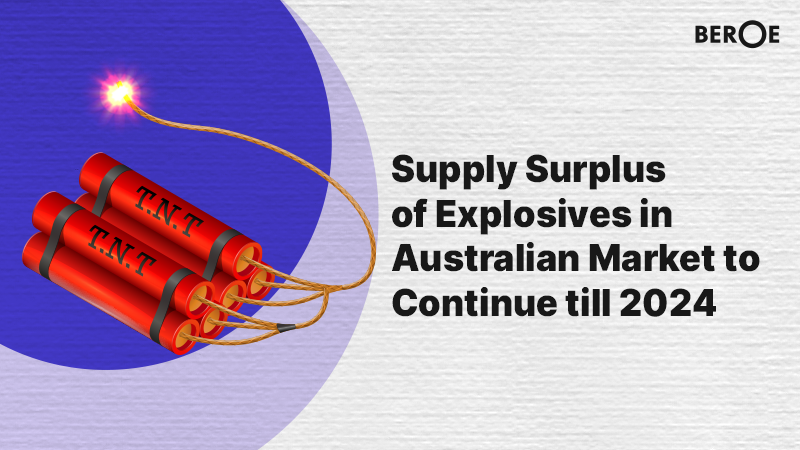 Mining activities in Australia ensure the supply of explosives remains steady and increases with time. This supply is expected to remain in surplus till 2021.

Raleigh, North Carolina, July 20: The commercial explosive market in Australia will be growing at a steady rate and the supply surplus will continue during 2021-2024. The current ammonium nitrate capacity that the market has will be able to handle the demand from mining explosives till 2025. Orica and Dyno Nobel are the major players in the domestic market, holding 65 percent of the market share.

“The continuous decline in grade of both surface and underground mining has led to increased exploration, which in turn, acts as a driver for the rise in demand from the explosives,” said Siddharth Kannan, Research Analyst at Beroe. “In the coal industry, majority of the demand is from high quality, low ash, low Sulphur type of coal that is expected to drive the demand for explosives and allied accessories. Mining was deemed an essential activity by the Australian government. Hence the demand for explosives was strong in Australia during 2020.”

The commercial explosive market in Australia was characterized by a supply surplus in 2021 that went to about 1.14 MMT. This number is expected to steadily grow in the coming years. The demand for metallurgical coal is expected to grow from 275 MT in 2017 to 372 MT in 2030, a growth of 2.3 percent. This will impact the demand for mining explosives in Australia through the decade. There are plenty of junior mining companies looking to explore the market for battery materials like lithium and cobalt, which will further drive the market in the next 5–10 years.

“For mining companies, 5-10 percent of procurement spend goes into mining explosives. So, engaging with the right supplier is highly critical for effective cost saving and to reduce risks, as well as to achieve the defined goals efficiently,” said Siddharth Kannan of Beroe.   “In this case, procurement intelligence comes to play a more important role for these companies. Having an adequate understanding of the market, suppliers, and upcoming trends like focus on using renewable hydrogen to increase ammonia production can make a big difference in their procurement strategy.”

Beroe is the world's leading provider of procurement intelligence and supplier compliance solutions. We provide critical market information and analysis that enables companies to make smart sourcing decisions — leading to lower costs, greater profits, and reduced risk. Beroe has been providing these services for more than 15 years and currently works with more than 10,000 companies worldwide, including 400 of the Fortune 500 companies. For more information about Beroe Inc., please visit https://www.beroeinc.com/.