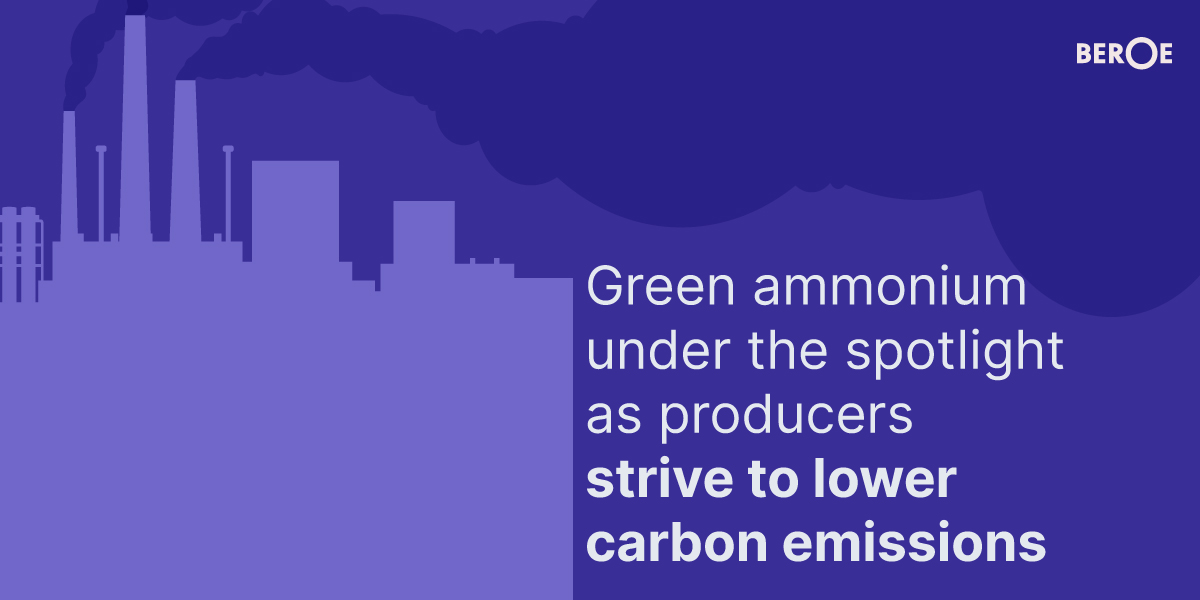 Raleigh, NC, Jan 23 - The worldwide ammonia demand will grow at a CAGR of 1-2 percent between 2022 and 2025. The driving force behind this expansion is the demand in Asia, which is projected to climb by 1-2 percent due to higher demand from the agricultural sector. 8 percent of the world's ammonium consumers are in the non-fertilizer industry, and a CAGR of 3-4 percent growth is expected in its demand.

Urea contributes more than 50 percent of the demand and is the primary driver for the Ammonia market. The new agriculture policy allows ammonia to be used in all agricultural and explosive goods, increasing demand for ammonium nitrate from the APAC area. In contrast, ammonium nitrate production in the western European market has decreased by around 0.2 MMT after the implementation of the new European agricultural policy, which has limited the usage of ammonium nitrate in agro-based fertilizers.

The market is favorable for procurement in Asia and the US, while it is not favorable in Europe due to tight supply; as the major fertilizer supplier, Russia is being imposed sanctions, and the exports are significantly reduced to the European region. The cost to set up an ammonia plant is relatively high in Europe, as the region does not possess a feedstock advantage like that of China or the US. In addition, the economic landscape in Europe has always been unpredictable, and hence, this discourages new investment in the region.

Ammonia prices are likely to increase in Europe and the US, while a decrease in Asia is due to weak demand. Uncertainty oversupply expectations from Russia due to the geo-political tensions are expected to lead to high volatility of natural gas prices.

With huge gas reserves, Trinidad and Tobago has less domestic demand to absorb the ammonia produced, and hence, it is expected to remain an export hub for the US for the next 3–5 years. Significant demand is expected from the Asian, and the US markets as the fertilizer and industrial usage are lined up in the US and Asia. The fertilizer (3–4 percent growth) and industrial sectors (3–4 percent growth) will drive the demand. Fertilizer production will add around 10 MMT capacity.

More than a dozen independent and integrated ammonium factories in Russia and Asia are almost ready, and it is anticipated that they will increase the amount of ammonia accessible on the commercial market, which will reduce the pressure on ammonium prices. China and India are major demand-driving regions in the Asian market. The demand for urea and other ammonium-based fertilizer will grow at a CAGR of 3–4 percent in India. Almost 5-7MMT of capacity additions are planned in the Asian market until 2025. Deepak fertilizers' 520 thousand MT/year capacity new ammonia plant in Taloja, Maharashtra, India, is on track to start operations by May 2023. Zhejiang Petroleum & Chemical (ZPC) has announced to add 600 thousand MT/year new ammonia plant in China.

The construction activity of this new plant is planned for two years, and the company is likely to make changes to the existing plan based on the market situation.

Spot sales mainly drive the Asian market due to high supplier fragmentation and competitive prices. Supply risk is low for buyers since the market is self-sufficient and suppliers are fragmented across Asia.

Europe is anticipated to be the largest region contributing to green and blue ammonia. Yara, CF Industries, Eurochem, TogliattiAzot, and Rashtriya Chemicals are already in the line of producing green ammonia through the H&B process.

Yara, one of the world's largest ammonia producers, added green ammonia to its innovation platform in 2017.

ThyssenKrupp launched its technology for "advanced water electrolysis, which produces carbon-free hydrogen from renewable electricity and water. This technology will enable economic industrial-scale hydrogen plants for energy storage and the production of green chemicals. TK also announced that it will start a demonstration plant in port Lincoln, South Australia. This plant will be the first to produce CO2-free green ammonia from intermittent renewable resources.

While the demand for ammonia grows with time, sustainability will also be an integral part of the industry.

For more such market data, insights, and intelligence check out Beroe LiVE.Ai™.

Beroe's research says SBR to grow at a CAGR of 5.5 percent