Four-day workweek? This Indian company tried it 4 years ago 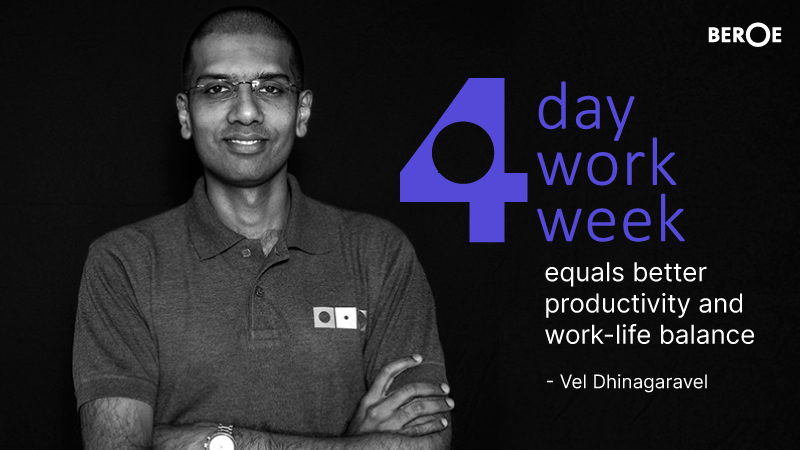 Thursday became the new Friday at Beroe Inc four years ago when the market intelligence firm began wrapping up its working week a day earlier. With three full days to themselves, employees caught up on reading, hiking, watching the first show of the new theatrical release, or furthering their education. Allowing the workforce to have well-rested minds, the company reports, has helped its output rise 200 percent over the levels achieved during the previous five-day schedule.

Such a move is convention-defying in the Indian market where, traditionally, companies view flexibility with suspicion. Talk of having shorter working weeks has taken off only recently. Earlier in the week, the Labour Ministry announced its proposed new labour codes would give companies the option of having four-day work weeks. However, it noted the working hours limit of 48 hours would remain sacrosanct.

When Beroe first implemented the four-day work week in 2017, there were no existing templates to turn to, even globally. The company invited employees to participate in designing the model, which it piloted for one quarter before making it permanent. There was some skepticism among its own workforce too, as some worried the shift might hurt customer satisfaction or send out the wrong message in the market. On an early LinkedIn post announcing the four-day work week idea, a few external commentators asked whether revenue was dropping and if the firm was doing this for cost containment.

There is a cost benefit — less electricity, fewer coffees — but that by itself should not prompt a shift, observes company CEO and president Vel Dhinagaravel. He characterises the move as a calculated “risk” — aimed mainly at boosting productivity while maintaining headcount. “We measured output rather than micromanaging input,” he says.

“If someone was putting in 40 hours a week and functioned at their peak for eight of those hours, we thought let’s turn those eight hours into 10 or 12, without taking the 40 hours to 60.” The improvement in performance has helped the bottomline enough to encourage investments into research infrastructure and digitisation.

While a shorter week makes sense for companies in the knowledge space, Dhinagaravel admits it may not apply as easily to a BPO or a bank which requires availability for a set number of hours. Founded in 2005, Beroe advises some 10,000 companies on procurement and supplier compliance decisions. Headquartered in North Carolina, it has roughly 350 employees across the world with major offices in Chennai and Bengaluru.

The CEO credits Europe, where he attended grad school, in part for his workplace ideology. Contrary to the stereotype that the French are lazy because of their 35-hour working week, for example, he found them to be more attentive and prepared than their — often exhausted — American counterparts.

“When I first went to meet with customers in France, I was struck by how structured the meetings were. People were focused, not working 8-12 hours or multitasking,” he recalls. “It was something worth emulating.” French workers have among the world’s most productive.

Global interest in the concept has jumped too. Germany’s largest trade union IG Metall demanded a four-day work week in 2020. A New Zealand company trimmed its weeks to four days in 2018. In Japan — notorious for a culture of overwork — Microsoft experimented with shorter weeks in 2019 and found productivity grew by 40 percent. Seven months into the pandemic last year, Google made waves by giving its employees a Friday off for what it called “collective well-being”. Others including PwC followed suit.

While a shorter week makes sense for companies in the knowledge space, Dhinagaravel admits it may not apply as easily to a BPO or a bank

The company offers numbers to support its decision. Productivity rose 200 percent, and customer satisfaction increased to 9 out of 10, versus 8.3 before the change. Employee satisfaction, on a scale of 0-5, climbed from a low of 3 six years ago to 4.3 recently. Annual attrition fell to the low single digits, that is a third of earlier levels. Other policies — options to work from home, work from anywhere, take a year’s maternity leave — also helped employee sentiment, particularly among women workers.

Before cutting back working days it is necessary that organisational and managerial mindsets evolve, according to Dhinagaravel, or such policies would stay in name only. In Beroe’s case, this meant letting global customers know about the change. Even now, one person from each team has to log in on Fridays in case that late Thursday e-mail needs answering. In ultra-lenient tones, the CEO says he does not even mind if an employee takes a break on a particular day to watch a movie or cricket match.

Despite the inherent perks of the four-day week, it is unlikely that companies will embrace it swiftly. But as India pivots from traditional industries and service lines to higher-end research and IT, Dhinagaravel reckons offering more and more flexibility will be inevitable. “The expectation of trust is much higher among millennials and Gen Z than in previous generations. Having grown up in post-liberalisation India, work and money is as important to them as the ability to have a full life.”