7 Indicators Of The State-Of-Artificial Intelligence (AI) 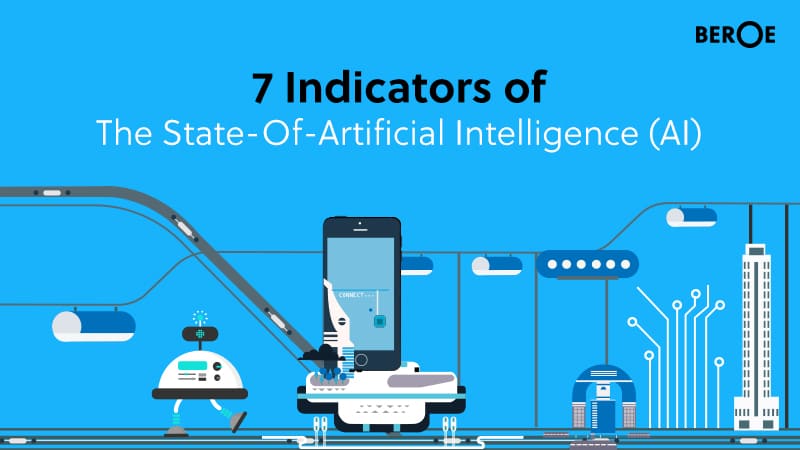 "The accelerated growth of RPA is being driven by high levels of efficiency and productivity that can now be achieved from intelligent automation, which combines advanced RPA, artificial intelligence and embedded analytics. The demand for RPA solutions has surged as legacy companies are now competing with 'digital native' companies like Amazon and Uber, in which nearly every part of the business is completely automated”—Mihir Shukla, CEO of Automation Anywhere Inc., an RPA maker that expects to deploy three million software robots at organizations worldwide by 2020, a 200% increase from today

Consumer adoption and attitudes: Make us trust the machine

Apple researchers tested people against three types of virtual assistant: a chatty system, a non-chatty system, and one which tried to mirror the chattiness of the user. The study found that people tend to prefer chatty assistants to non-chatty ones, and have a significant preference for agents whose chattiness mirrors the chattiness of the human user, as “interacting in this fashion increases feelings of trust" (Import AI #141 and Mirroring to Build Trust in Digital Assistants).

AI fail whale or the algorithm made me do it

The New York Metropolitan Transportation Authority conducted a trial at the Robert F. Kennedy Bridge last year installing cameras on the bridge that were supposed to capture and identify the faces of drivers through their windshields as they passed, matching them against government databases. The agency concluded that the “initial period for the proof of concept testing at the RFK for facial recognition has been completed and failed with no faces (0%) being detected within acceptable parameters.” That’s no faces accurately identified. Despite the failure, more cameras are going to be positioned on other bridges and tunnels, according to a spokesperson (Technology Review).

Facebook’s AI sent users helpful suggestions to wish happy birthday to those who’ve died. Now, Facebook’s AI is being deployed to work out which of its users are dead, rather than waiting to be told (The Guardian).

Facebook said it struggled to identify the video of the New Zealand mosque shootings because of the use of a head-mounted camera by the gunman, which made it harder for its AI to detect the nature of the video. Terror footage from a first-person perspective was a type of video Facebook’s AI had not encountered before (Bloomberg).

Jobs, even super jobs, for some but not so super for others

62% of organizations are using automation to eliminate transactional work and replace repetitive tasks, 47% are also augmenting existing work practices to improve productivity, and 36% are “reimagining work;” 84% said that automation would require reskilling and reported that they are increasing funding for reskilling and retraining, with 18% characterizing this investment as “significant;” In 10 years, 20-30% of jobs will be 'superjobs,' 10-20% will be low-wage, low-skill jobs, and the middle 60-70% will be ‘hybrid jobs’ that require both technical and soft skills; superjobs require the breadth of technical and soft skills that hybrid jobs do—but also combine parts of different traditional jobs into integrated roles that leverage the significant productivity and efficiency gains that can arise when people work with smart machines, data, and algorithms (Deloitte).

Within the next five to seven years, AI may replace nearly 50% of unskilled labor across the globe, and one in every five workers will utilize AI in their workflows by 2022 (Beroe Artificial Intelligence Market).

A recent survey of LinkedIn profiles found a total of 36,524 people who qualified as self-reported AI specialists, a 66% increase from 2018; in the US, there are around 144,000 AI-related job openings and only about 26,000 AI specialists seeking work (Global AI Talent Report 2019).

In a survey of 111 AI researchers and university administrators, 89% said that it was “difficult” or “very difficult” to hire and retain AI experts (Times Higher Education and Microsoft).

The average salary for Machine Learning engineer in the US right now is $143,000 (Indeed.com).

Data Scientist is the highest paying entry-level job in tech in the US with an average salary of $113,254; as of the end of February 2019, there were half a million open tech jobs listed in the U.S. with new ones generated at almost 400% the rate of non-tech jobs, and paying around twice as well (Comparably Highest Paying Entry-Level Jobs in Tech).

By 2030, around 500,000 bank workers in the United Kingdom and 1.3 million in the United States could be affected. If this is mirrored across all countries globally, then there will be tens of millions of banking and financial services jobs impacted by the introduction of AI technology in the coming decade (IHS Markit Global Business Value of Artificial Intelligence in Banking).

AI could create 38.2 million net new jobs across the global economy by 2030, offering more skilled occupations as part of this transition (PwC).

Google researchers have developed AI software capable of generating AI, and they put their invention to the test at a data-crunching competition called Kaggle Days. Google's entrant, called AutoML, can automatically generate new neural network architectures that are more powerful and efficient than the models created by AutoML's inventors. Using data from an auto parts maker, more than 200 Kaggle Days competitors, representing the top of their field, were tasked with predicting bad batches in factory output. Before midday, AutoML took the lead and held that position as the day wore on. But the biological humans rallied and overtook AutoML in late afternoon. When it became clear that AutoML was knocked out of first place, “a hearty and relieved cheer broke out” from the assembled boffins (Wired).

In 1944, Richard Feynman, then a junior staff member at Los Alamos, organized a contest between human computers and the Los Alamos IBM facility, with both performing a calculation for the plutonium bomb. For two days, the human computers kept up with the machines. “But on the third day,” recalled an observer, “the punched-card machine operation began to move decisively ahead, as the people performing the hand computing could not sustain their initial fast pace, while the machines did not tire and continued at their steady pace” (David Alan Greer, When Computers Were Human).

Data is “AI Fuel” so we better locate, refine and guard it

The IT systems at Morgan Stanley take in 1 million gigabytes of data every month (Wall Street Journal).

With the explosion and proliferation of data that comes from digital initiatives, cloud use, mobility and IoT devices, data discovery continues to be the biggest challenge in planning and executing a data encryption strategy with 69% of respondents citing this as their number one challenge; payment related data (55%) and financial records (54%) are most likely to be encrypted; the least likely data type to be encrypted is health-related information (24% of respondents) (nCipher 2019 Global Encryption Trends Study).

In the first quarter of 2019, there was a significant uptick in business ransomware detections (195%), along with continued momentum for Trojan variations by over 200% (Malwarebytes).

Machines powered by artificial intelligence increasingly mediate our social, cultural, economic and political interactions. Understanding the behaviour of artificial intelligence systems is essential to our ability to control their actions, reap their benefits and minimize their harms. Here we argue that this necessitates a broad scientific research agenda to study machine behaviour that incorporates and expands upon the discipline of computer science and includes insights from across the sciences. We first outline a set of questions that are fundamental to this emerging field and then explore the technical, legal and institutional constraints on the study of machine behaviour (Nature).

“We’re seeing the rise of machines with agency, machines that are actors making decisions and taking actions autonomously. This calls for a new field of scientific study that looks at them not solely as products of engineering and computer science, but additionally as a new class of actors with their own behavioral patterns and ecology”--Iyad Rahwan, MIT Media Lab.

“It’s so irresistible,” says Mr. McEwan of technology’s draw. “We can’t stop it. We’ll become suckers for anthropomorphizing a halfway-intelligent machine, as long as it gestures and looks like us” (Wall Street Journal).

State-of-the art AI cannot compete with simple animals at adapting to unexpected changes in the environment. [The Animal-AI Olympics] competition pits our best AI approaches against the animal kingdom to determine if the great successes of AI are now ready to compete with the great successes of evolution at their own game. [The goal is to] benchmark current AI against multiple animal species using a range of established animal cognition tasks (Animal-AI Olympics).

The global artificial intelligence (AI) market is expected to grow at a compound annual growth rate (CAGR) of 40% percent until 2023, reaching $26.4 billion (Beroe).

The business value of AI in banking (including the cost savings and efficiencies of introducing AI technology compared to keeping existing infrastructures and processes) is projected to reach $300 billion by 2030, up from $41.1 billion in 2018 (IHS Markit Global Business Value of Artificial Intelligence in Banking).

Using AI for environmental applications could boost the global economy by up to $5.2 trillion in 2030, a 4.4% increase on the business-as-usual scenario, while reducing GHG emissions worldwide by 4%, equivalent to the 2030 annual emissions of Australia, Canada and Japan combined (PwC).

The Future Of Learning: Top Five Trends For 2020

Pinterest's CMO AND 6 Other Senior Execs On #BalanceforBetter