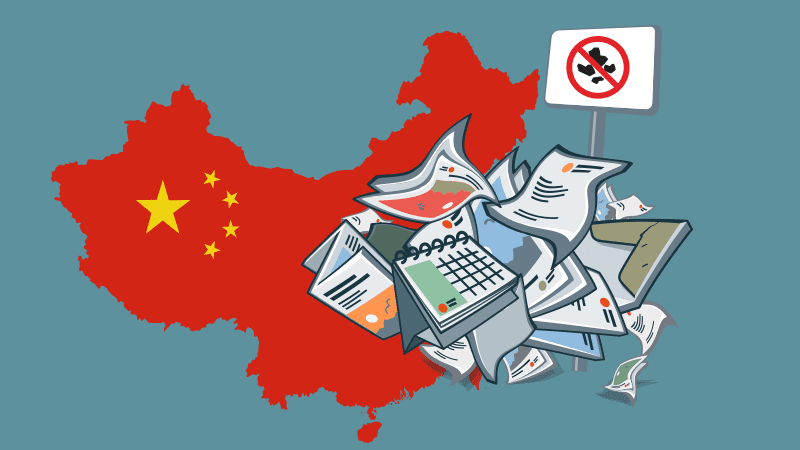 China’s ban on mixed paper imports, revised contamination standard and cutting down of OCC import licenses, at the back of environmental concerns, is causing serious damage to the global recycling industry. During the second half of 2017, Chinese domestic OCC prices have been skyrocketing against significantly decreasing import prices. Packaging buyers in China are thus facing harder times in acquiring corrugated boxes owing to higher prices.
Increasing garbage and pollution had forced China to notify WTO of a ban on 24 types of waste that included mixed paper. Though OCC was not named in the ban, it was still subjected to import restriction with a revised contamination standard. Consequently, the corrugate box prices in China have been witnessing significant increases, considering increasing raw material prices.

China is the largest importer of recovered paper in the world. Its share of global RCP imports in 2016 was 55 percent, and the United States is the largest RCP exporter to China. By Grade, China imports almost 59 percent of OCC for its domestic converting requirements.

Western countries are considerably worried due to the significant percentage of RCP exports to China. They fear it might help lose the tonnage destined for China, for which compensation would be difficult.

As OCC accounts for majority of the imported grade, the current import restrictions has induced more dependency on domestic OCC, whose prices are now rising significantly.

Why China wants to Ban?

During the second half of 2017, Chinese mills using OCC were subjected to severe inspections, and the import licenses were cut for mills that did not meet the required standards. There were also reports that some of the mills were instructed to give up the import quotas that were approved last year. RCP cargos were thoroughly inspected at Chinese ports.

The demand for Corrugates in China

China being an industrial export economy, the demand for corrugated boxes is very high. Its efforts to develop its own consumer economy would inevitably require large numbers of boxes at relatively cheaper rates. As per the latest data available, in 2015, China produced 44.7 million metric tons of containerboard, while Western Europe had produced 24.2 million metric tons and North America, 34.4 million metric tons. Though China was the largest producer of boxes in the world, the country imported more board than it exported to fill its needs. 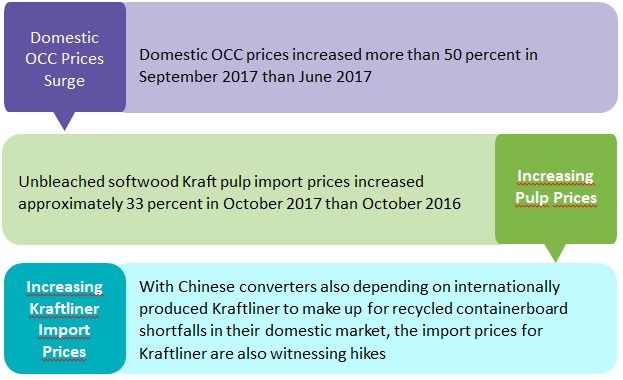 Packaging Buyers Based in China

With first batch of OCC licenses provided in Dec 2017 and similar approvals expected in the forthcoming months, Chinese buyers might be happy as OCC market congestion will ease. However, during peak demand there is a possibility of tight supply as mills may struggle to meet demand.

For time being, global packaging buyers will not face any significant impact, except the packaging buyers in Asia, who could witness decrease in box prices as OCC, which was destined for China, will be diverted to Asian countries; this would mean higher availability of raw material for box requirements, reducing the prices.

Other Industry to be Affected

Though mixed paper accounts to only 15–20 percent of the total RCP imports by China, the global recycling industry is worried, as huge volume of scrap paper is shipped to China. Scrap material represents a significant percentage of the backhaul journey from North America/ Europe back to China. In the case of the US, the potential loss amounts to 160,000 TEUs (Twenty-Feet Equivalent Unit) or 80,000 FEU (Forty-Feet Equivalent Unit) a year.

China had provided first batch of OCC import licenses in December 2017. Out of the total import volume for 2018, about 10-12 percent was issued as a first batch of licence by the Chinese government. China had provided relaxation with respect to paper manufacturing capacity of mills. Initial threshold for Chinese mills to apply for licenses was set as 300,000 tpy; however China relaxed it and mills with a minimum paper manufacturing capacity of 50,000 tpy were allowed to apply for licenses.

It is estimated that the recovered paper imports might reach up to 22 million tons in 2018 as the government had lowered the threshold of minimum paper manufacturing capacity.

Even though the projected tons for 2018 has increased, it is comparatively lower than the previous years and considering the increasing demand for boxes in China, there might be some congestion experienced in the OCC market during peak demand season. Mills that have got import licenses will judicially allocate the resources based on market fundamentals.

Chinese converters will start depending more on imported containerboard owing to rising OCC prices in China. When such a situation arises, the demand for imported containerboard in China will increase, causing price increases in the respective domestic market. Global packaging buyers will face the heat due to a strong demand for imported containerboard in China.
As far as the mixed paper is concerned, waste will pile up in major exporting regions and exporters might look for other Asian countries such as India and Vietnam to ship the scrap at a cheaper rate. We will have to wait and watch as to whether it would be the same process as it was for China i.e. the case of backhaul journey from North America/Europe.

It is high time that RCP exporters start to focus on what is being mixed in the scrap paper and the quality of material, as there is a possibility that other countries would also intend to impose a ban on such scrap in the future, since garbage and pollution is perpetual concern for both China and other countries. Though recycling organizations have proposed to jointly work with the Chinese in handling garbage and improving domestic collection rates, the same must be proposed to other countries that import RCP for the global recycling industry to remain healthy and profitable.