As we have said in our previous blog post, sugar prices have gone up by nearly 50 percent in the past year due to El Nino induces weather phenomenon that had prevailed in 2015. El Nino led to excessive rains in Brazil, and drought in India and Thailand -- traditional sugarcane producing regions.

Sugar prices registered the highest growth as against major agro commodities such as corn, wheat, soybean, cocoa and coffee over the past year. 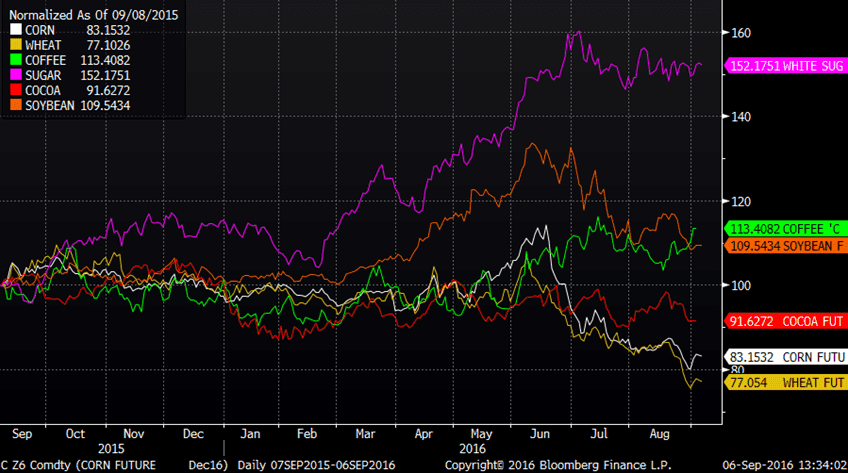 The sugar crop usually takes 12 to 17 months to be ready for harvest. Major producers in northern hemisphere such as India, Thailand, China, EU, Mexico and the U.S. plant sugarcane in early spring (Mar-Apr) and harvest in fall (Sep-Oct). On the other hand, southern hemisphere growers such as Brazil and Australia begin cane harvest in April lasting till November.

Hence, raw sugar prices have a tendency to take a downward turn during the harvest periods of April/ May and September/ October.

As October marks the new crop year, global sugar production in 2016/17 is expected to increase by 3 percent from the previous year to 169 million metric tons (MMT) due to increase in production in Brazil, Thailand and European Union.

Global sugar supply in 2016/17 is expected to reach 262.7 MMT with consumption reaching 174.3 MMT, according to Beroe estimate.

The rally in the sugar prices won’t abate in the near term as global surplus stocks is expected to fall 17 percent to 32.8 MMT when compared to the five-year average. And not just that: sugar prices may also continue to rally because of production shortfall in India.

Indian sugar production for 2016/17 is estimated to fall to 25.5 MMT because of reduction in output from major cane producing states of Maharashtra and Karnataka. Production from other states such as Tamil Nadu and Uttar Pradesh would offset only about one-third of this shortfall.

The production shortfall and the subsequent price rise have led the Indian government to slap a 20 percent export duty on sugar. This is in contrast to the previous year when exports were encouraged. And not just that: imports are also discouraged by 40 percent import duty.

The latest moves by India have effectively shut it out of the global sugar markets, and importers will be looking for alternate sourcing destinations such as Brazil and Thailand.  As a result, in the new crop year beginning October, the price of sugar is expected to hover around 20 U.S. cents per pound and may not fall in the medium term.