Home / Insights / Procurement Digitalization has two approaches: All or Some

Procurement Digitalization has two approaches: All or Some 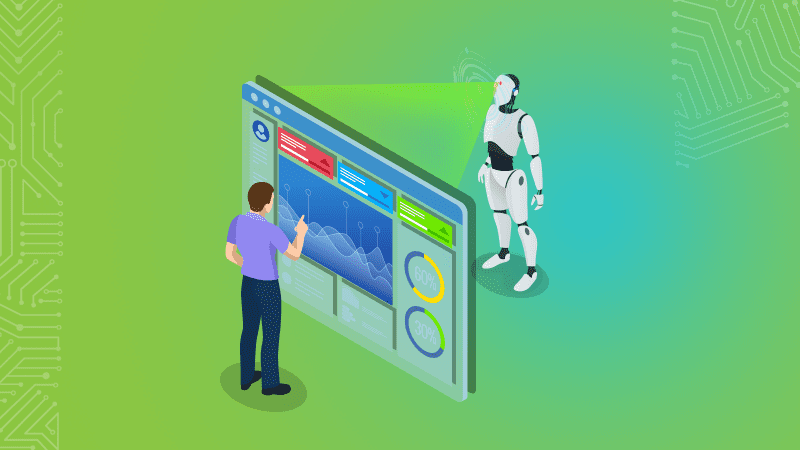 Venture capitalist Marc Andreessen once remarked that, “software is eating the world.” The import of Andreessen’s statement is that more businesses are being run on software and delivered as online service—from movies to taxis to national defense. Going forward, the Procurement function as a whole will be no exception to the rule—or so we are told.

The efficacy and efficiency of Procurement Organizations are usually measured on the following broad parameters:

In an increasingly digital world where manual processes are transformed into bits and bytes, the challenge for Procurement Organizations is to stay relevant.

Given this scenario, many companies struggle to decide whether a dedicated Procurement function is ‘good to have’ or a ‘must have’, according to Rahul Devarakonda, Head of Product at Beroe Inc.

“One of the key reasons why it makes the decision very hard is because of business stakeholders having to accept the fact that someone else would be guiding, monitoring and controlling their own budget with regards to external spending,” Devarakonda said.

“Discrete spending, or being in a position to approve spending, represents power, authority and importance. This holds high value in the corporate world, where executives face immense resistance to letting someone else manage it,” he added.

As they say, every problem has a solution, and the new catchphrase is ‘Procurement Digitalization’, which promises to offer a plethora of solutions to multiple problems.

Now, the pressing question is, can Procurement teams achieve the much-needed centrality if they jump onto the ‘Digitalization’ bandwagon?

Also, how can Procurement Organizations make an effective business case for such investment in technology when they are facing reductions in operating budgets averaging 0.3 percent in 2018, according to data published by Hackett.

While expectations are high, so are the complexities in implementing digitalization in one’s organization. For example, questions could range from as simple as ‘where to start’ to as complex as ‘what mix of solutions can bring in more value to operations’.

While there are solutions in the market that envisage complete overhaul of processes and systems, with some features even sounding utopian, Procurement Organizations also face the prospect of an alternate approach, which uses a plug-and-play model to digitize certain processes that otherwise consume too much time and effort.

However, what is Digitalization? What does it entail?

The Hackett Group defines digital transformation as the process of transitioning aspects of a traditional business into a digital business, principally by applying technology to innovate.

Nevertheless, there is no single definition of Procurement Digitalization, although the Procurement community is aware that some form of digitalization can bring in operational benefits.

Beroe spoke to some industry experts to get a handle on the meaning of digitalization. They opine that Procurement Digitalization is the opportunity to redefine Procurement and take outcomes to ‘new levels of excellence’ through the implementation of cognitive and big data analytics, which does three key things:

One approach is to use a plug-and-play model to digitalize only the chosen processes that otherwise consume too much time and effort. Will adopting digital technologies to selectively address process or people inefficiencies, instead of a complete overhaul or big bang digitalization still be labeled as digitalization?

The industry experts with whom Beroe spoke seem to agree that selective technology interventions to address operational inefficiencies can also be termed ‘Digitalization’, although as more of a means to an end, i.e., a good starting point toward the complete overhaul of systems and processes.

Naturally, the approach to Digitalization would vary depending upon the maturity levels each individual company within Procurement as well as their readiness to change.

Digitalization requires a roadmap, as few companies would be ready for a big bang approach. Adopting digital technologies for selective processes reduces risk and delivers return on investment as well as internal stakeholder satisfaction.

He further explains that Digitalization enables a new value proposition for Procurement, which has three dimensions.

“One is data driven decision making that goes beyond historical data and far beyond procurement data into business data correlation. Two is the AI capability to understand the data deeper and across more dimensions. Third is automation, as data points help machines to process known patterns. All in all, it moves Procurement to a business enablement function,” he added.

We ran a poll among users of Beroe LiVE, a community of thousands of Procurement decision makers, to understand how they define Procurement Digitalization. We surveyed those whose job titles fell under three categories: VP-Level, Director, and C-Level. 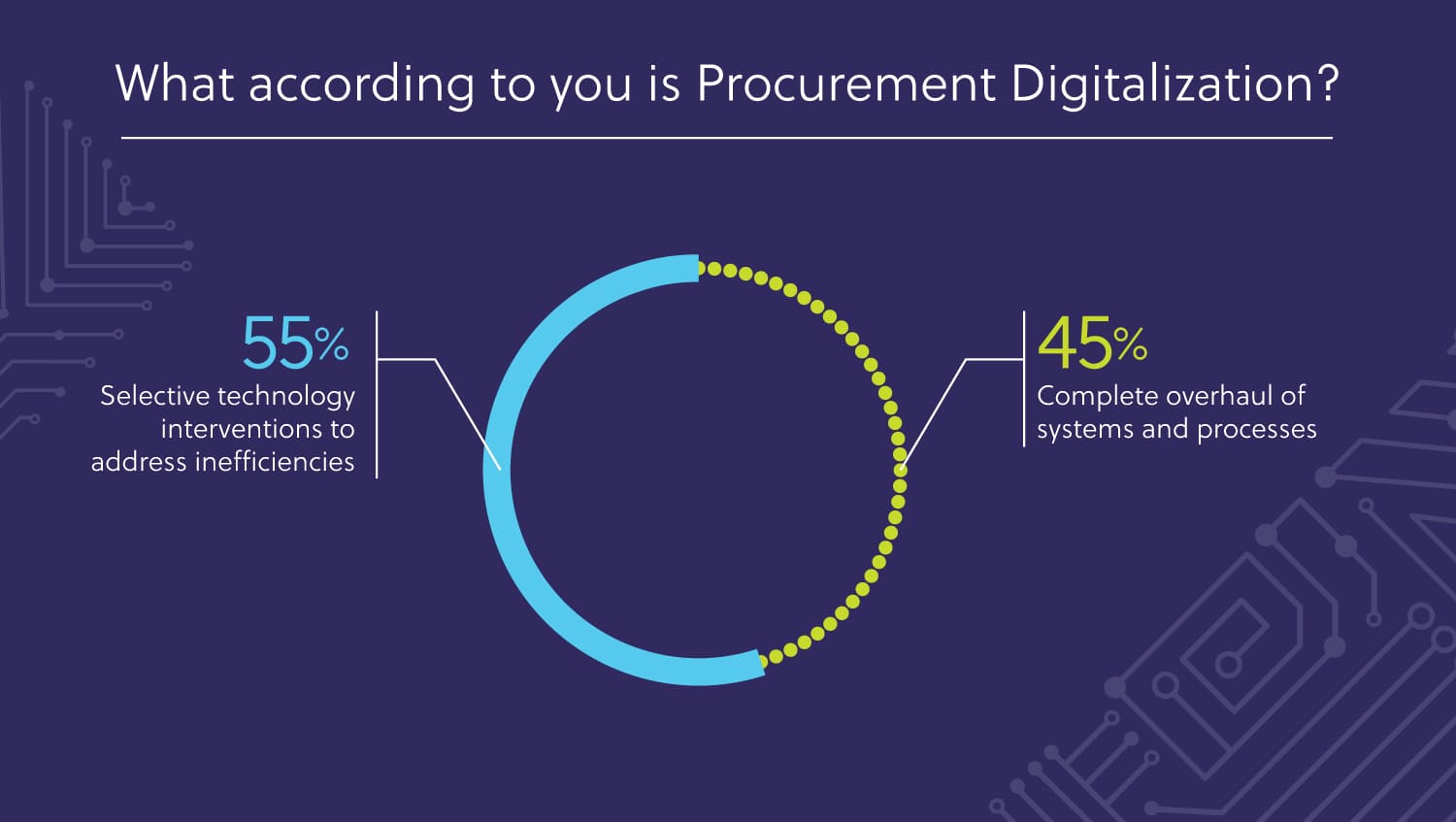 Interestingly, the choices differed starkly across job roles. The responses from those at the VP-Level were split evenly between both choices. Nearly 60 percent of Directors said Digitalization would mean selective technology interventions to address inefficiencies.

By contrast, 55 percent of C-Level respondents voted in favor of complete overhaul of systems and processes.

This is understandable, because only those at the C-Level have the cockpit view of all operations and see the ‘whole’ where others see ‘parts’. 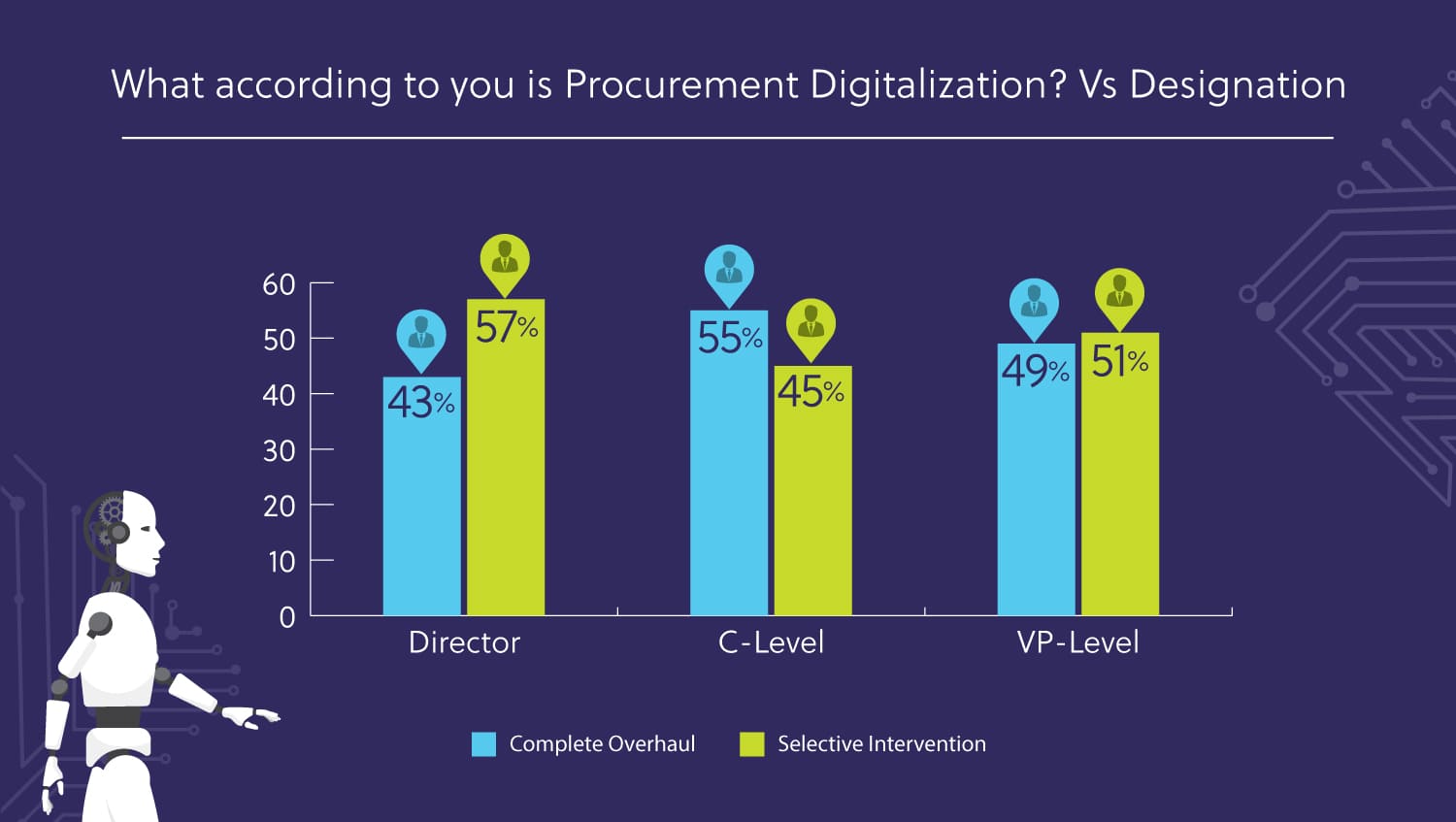 A little more than half the respondents said that less than 5 percent of the total budget is set aside for Procurement Digitalization, while only one-tenth said their organizations allocate more than 20 percent of the budget.

C-Level respondents evenly voted for 5 to 10 percent and above 20 percent. None of them voted for 10–20 percent. 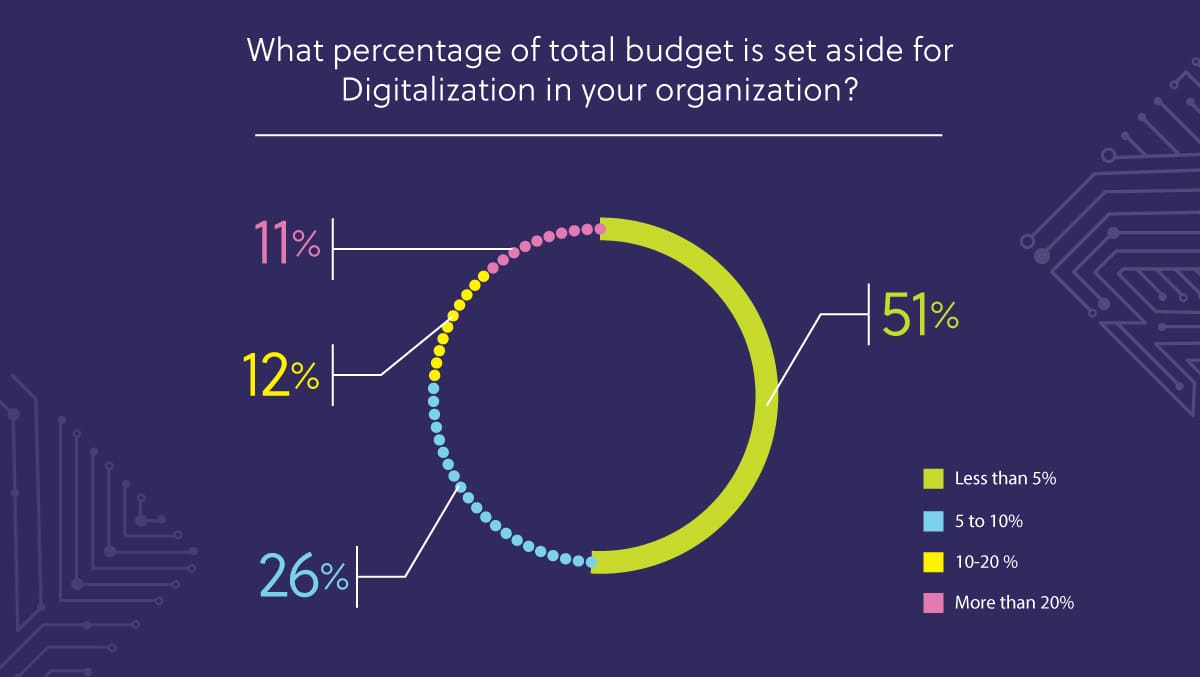 It is quite clear that with limited budget outlays, Procurement teams will have to prioritize their tech investments to address inefficiencies. Big bang Digitalization may not be feasible for many Procurement Organizations right now.

In fact, an overwhelming majority of the respondents said that the best way to kick-start a Digitalization program is in phases. 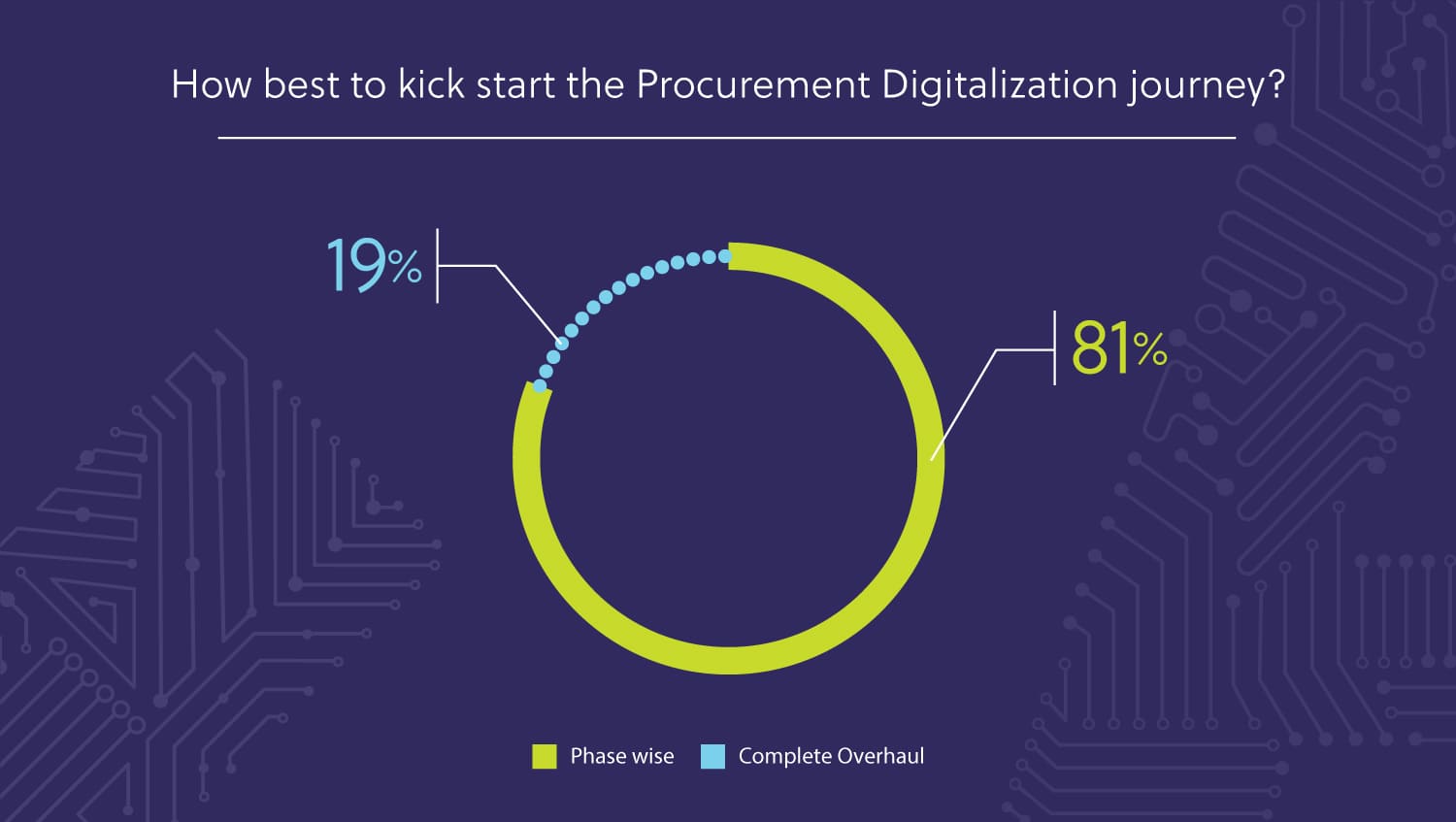 There are a few of comprehensive solutions out there in the market. Please note that these are only indicative pointers and do not reflect the full range of solutions that are on offer.

According to IBM, digitalization involves an all-encompassing technology solution that has major components such as

As per Accenture, Digital Procurement

The future will give rise to an “organization of one.” The technology foundation of the new procurement organization will be five apps. Below are the brief outlines of each app’s functionality:

Here are some examples of selective technological interventions that can bring about process efficiencies.

Example 1: Catalog buying is becoming popular for high-volume services, which cuts down the time to procure a service. More spend can be brought under management as tools become smarter.

Moreover, they are adept at extensive customization and are open to adding extra service modules. This makes them a popular option for organizations that seek customization, along with lesser setup costs.

However, not all Procurement Organizations have invested in a comprehensive spend analysis tool, which makes it tough to single out an underperforming category or categories.

There are several built-for-procurement spend analytics solutions available in the market. These offer intuitive user interfaces and graphical dashboards to help Procurement teams get the right insights at the right time. While selecting an appropriate spend-analysis solution, Procurement leaders should evaluate the software’s ability to automate the consolidation, cleansing and categorization of data.

Example 3: The telecom spend of companies is increasing year-on-year. Furthermore, more than 80 percent of businesses overpay for their mobility services. Also, 65 percent of the telecom invoices contain errors while 85 percent of these invoice errors are in favor of the network carriers.

Inappropriate contracts and plans, lack of proper policies for international roaming, underutilization of voice lines and mobile devices, premature device replacements and unnecessary data downloads are the main reasons for unbridled rise in telecom spend, which Procurement teams would like to curb.

There is a way to fix this problem: Telecom Expense Management solutions can address the invoice errors and eliminate the problem of ever-rising phone bills.

The Director, Global Procurement Operations of a multi-billion dollar life sciences company summed it up as follows:

Procurement Digitalization is not a specific action but more a philosophy to utilize advances in technology to improve effectiveness. The implementation would depend greatly upon resources, severity of technology lags and opportunities for improvements. If the ROI for a large ‘big bang’ implementation would be significant enough, a complete and swift overhaul may be beneficial. If the ROI would be smaller and less impactful, the continued improvement in processes could be budgeted and managed over time to make gradual improvements without significant investment in technology or disruption of operations.