The ongoing Mexican standoff over NAFTA can impact procurement operations

Diplomatic relations between U.S. and Mexico have soured early in the new year, as the Trump administration threatened to impose a 20 percent tax on Mexican imports, leading to the cancellation of a meeting between the presidents of the two countries.

U.S. President Donald Trump has said that his government will renegotiate the North American Free Trade Agreement (NAFTA) trade deal with Mexico and Canada.  The new administration, which is not a big fan of multi-country free trade deals, also walked out of the proposed multi-lateral trade deal Trans Pacific Partnership (TPP).

The fast pace of changes on the trade and immigration front has caught many businesses by surprise. Reuters News reported late in January that U.S. food producers and shippers are trying to speed up exports to Mexico and line up alternative markets as concerns rise over trade and immigration at the country’s southern border.

Some U.S. producers of corn, soybean meal and distillers dried grains (DDGs), an ethanol byproduct, are trying to accelerate sales to Mexico because they are uncertain about the risk for new tariffs to disrupt trade, Rafe Garcia, general manager for U.S. operations at shipper Primos & Cousins USA, told Reuters.

The news report shows how some companies are working overtime to minimize as much adverse impact as possible.

Corporate America is divided over taxing imports. One group of companies comprising of big conglomerates such as GE and Boeing launched a group known as “America Made Coalition” on Feb. 3 to back a House Republican proposal that would cut corporate income tax to 20 percent from 35 percent, exclude export revenue from taxable income and impose the 20 percent tax on imports. (http://beroeinc.co/2k8Avhk)

Meanwhile, the Retail Industry Leaders Association, which represents more than 120 trade associations and companies, launched a separate coalition on Feb. 2 to fight the House Republican proposal known as the "border adjustment" tax. (http://beroeinc.co/2k2ZwYX)

Automobiles and auto parts are the biggest imports from Mexico.  However, imposing a flat import tax on automobiles produced in Mexico is a tricky affair because tens of thousands of parts that make up a vehicle often come from multiple producers in different countries and travel back and forth across U.S. – Mexico borders several times, making it difficult to determine the origin of production.

For example, more than half the parts in the Ford Focus today are made outside the U.S. and Canada, including 20 percent in Mexico. Ford also ships in some of the car’s engines from Spain and transmissions from Germany, according to Wall Street Journal.

While U.S. has a trade deficit with many countries in goods and services, it has had a positive trade balance in the agricultural sector since 1960. U.S. farmers could potentially be caught in the crossfire of any trade war as Mexico and China are two of the top three agricultural export destinations. 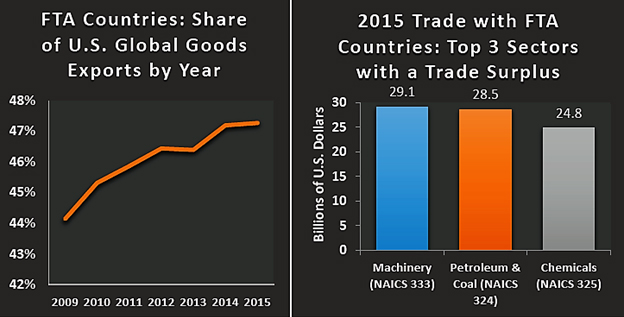 Free trade agreements inherently led to phased elimination of tariffs as well as many non-tariff barriers to trade. FTAs involve billions of dollars of trade flows and the main beneficiary has been small and medium enterprises (SME), whose exports in 2013 to FTA countries (latest available) was $192 billion.

Article 2205 of NAFTA allows the U.S. President to withdraw from the agreement. But it is being debated whether that would repeal the congressional legislation that put it into effect, the WSJ said.

If a trade deal is repealed then World Trade Organization (WTO) tariff schedule will apply. This would imply that U.S. exporters to Mexico would face greater tariff hikes than Mexican exporters to the U.S., because Mexico accepted much greater tariff reductions under NAFTA than the U.S. did, as per WSJ.

This is a time of great uncertainty. It’s tough to predict the outcome of NAFTA renegotiations. Considering the fact that it is tricky to figure out all the pieces of the puzzle, what are the pointers for procurement organizations?