La Nina to have positive impact on key Indian crops

India's weather office, India Meteorological Department (IMD), said in June that monsoon rainfall is expected to be above normal with an average 106% of LPA (Long Period Average), which potentially indicates that 2016 could turn out to be a year of surplus rainfall followed by two years of drought.

The Indian monsoon arrives over the subcontinent following a period of intense summer heat. This natural weather system has been in existence since time immemorial. Owing to hot air circulation over the land, cooler monsoon winds from the Arabian Sea and Indian Ocean gets sucked into the subcontinent resulting in torrential downpour. Parched lands and drying rivers are rejuvenated by bountiful rains - the season may last anywhere between four and five months.

However, in 2015, this weather pattern was disrupted by another naturally occurring phenomenon called El Nino. The El Nino conditions that prevailed from April to December wreaked havoc across the world – with some regions experiencing droughts while few others faced devastating floods.  El Nino peaked in December and started declining thereafter, paving way for La Nina.

El Nino marks warming of the surface of the tropical Pacific Ocean that can trigger downpours or droughts around the globe. On the other hand, La Nina is the opposite of El Nino and marks the cooling of pacific waters.

It is tricky to establish a direct correlation between El Nino/La Nina and crop yields as multiple factors go into determining the crop output. However, since Indian rainfall is predicted to be above normal this year as compared to recent past, there is a possibility for crop yields to be positively affected.

India is an important producer of Pulses, Spices, Sugar, Rice and Wheat among other crops.

Indian Government is in discussion with Myanmar to import pulses to bring the stock level to a sufficient level.  However, production is expected to be better than previous year.

Guar seeds acreage in Rajasthan, Gujarat and Haryana is expected to drop by 25% from previous season because of low export demand.

Let's see how the above normal monsoon can affect India's key commodities and its likely implications on the global market: 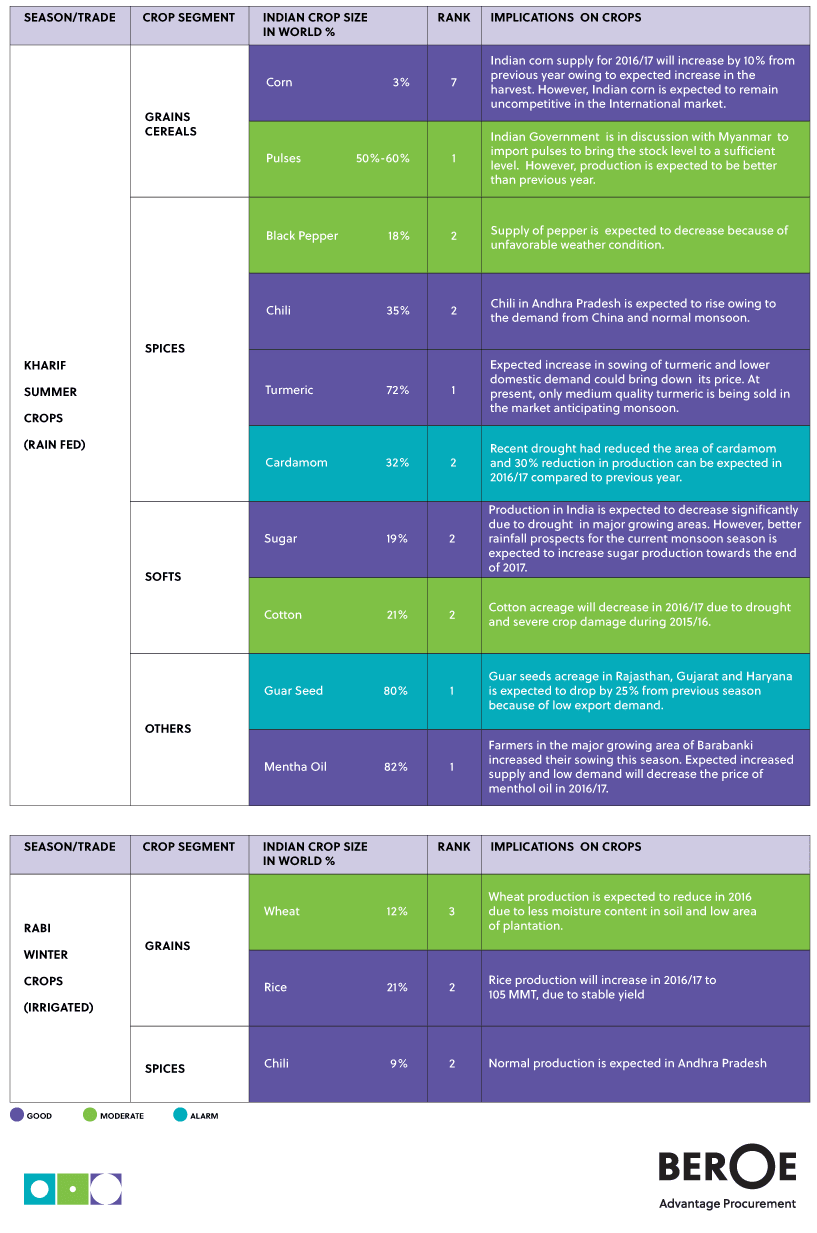