Interview: “We are challenged by the government to improve efficiency” 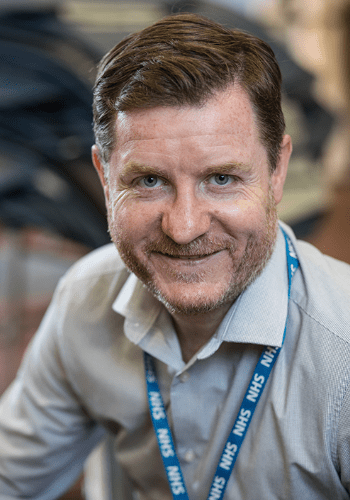 The various constituents of the UK -- England, Northern Ireland, Scotland, and Wales -- have broadly similar systems of private- and publicly-funded healthcare. These systems are generally referred to as National Health Services (NHS). Yet, they are funded differently, with ownership devolved to each country.

NP sources many types of medical and non-medical items -- ranging from MRI scanners and blood transfusion kits to bed linens and food. Every month, NP makes around 950 deliveries to Scottish hospitals and health centres. Its National Distribution Centre provides a range of 8,800 products, and serves Scotland’s population of about 5.3 million.

NP has been contracting and managing commercial arrangements on behalf of NHSScotland for over 12 years. Notably, sixty percent of all non-pay spend across NHSScotland is covered contractually by NP. The organisation uses an electronic tendering tool called PCS-Tender, which is centrally funded by the Scottish Government.

At his Gyle Square office in Edinburgh, Head of Procurement Steven McLaughlin, a senior manager within the NP structure, described to Beroe in an interview the level of detail and clinical engagement that NP carries out to ensure that their supply contracts are optimal for the NHS in Scotland.

“Of course, the objective is to leverage our full buying power by purchasing in bulk. However, we have a clear focus on ensuring that the contract has the correct specifications and has been approved across the clinical community. This ensures we reduce costs, and -- more importantly -- that we deliver the required patient care experience,” Steven said.

He added that one of NP’s main tasks is carefully adhering to government regulations in order to avoid legal risk.

“We look to consolidate all similar needs into a single specification before undertaking final selection. Much of it is a regulated process, currently governed by European Union (EU) policies. Using our expert knowledge, we can navigate these regulations, remaining in compliance whilst meeting our stakeholders’ requirements. Of course, the complexity we deal with results in a sourcing cycle that may range anywhere from 6 to 18 months. Sourcing is not a simple process here at NP. On the contrary, it is very complex,” Steven elaborated.

As things stand -- after postponement of Brexit earlier this year -- the UK could leave the EU on Oct. 31. There is also the spectre of a "Hard Brexit," i.e., a no-deal Brexit. This would entail leaving the European Union without a deal. The UK Government and Parliament have yet to approve any sort of deal with the EU as of Oct. 19.

A no-deal Brexit could result in supply chain disruption. Thus, a contingency plan is needed to address this issue. Toward this end, the NP has been working with both the Scottish Government and the Department of Health and Social Care (DHSC).  The scope initially covered medical devices and clinical consumables. However, it was later expanded to cover medicines, food, and labour-based services, according to the NP's annual report.

Steven said that in case of a no-deal Brexit, the procurement process would not change much. Rather, the current rules and regulations governing NHS procurement will be transposed into UK law. Yet -- should there be a no-deal outcome -- NP will be an essential part of preparation and planning to maintain hospital supplies over the crucial first few months.

“The negotiations between the UK and the EU are ongoing. We don’t know what the outcome will be. However -- as a professional procurement operation for vital healthcare services -- it is only right and proper that we are prepared for all eventualities,” Steven added.

There is one change, though: under current EU rules, NP must advertise calling for tenders across Europe; whereas under the no-deal Brexit, they would be required to advertise only in the UK.

There are some primary challenges in ascertaining Brexit’s likely impact on public procurement. One of these is a lack of clarity around the UK’s future trade relationships with the EU and other countries. Potentially, future trade agreements negotiated by the UK could impose obligations on procurement or competition.

The budget comes from the Scottish Government, and NP must work within this allocation.

“Part of our allocation is for forecasted procurement costs. And we have to work to ensure that we reduce the pressure on budgeting each year.  However -- in both value terms and real terms -- the budget is not keeping pace with inflation. So, our challenge is to work not only to maintain services under inflationary pressures, but to constantly strive for cost reduction,” Steven said.

Steven said that even though there are budgetary constraints -- caused by the mandate to rein in costs -- should not have an impact on quality.

“The regulations mandate that we have to be very clear about the specifications to prevent a cost versus quality debate. In our RFPs, we create sub-criteria on quality. We explain in detail, so that suppliers know what is expected of them. Also, we look at total cost and not just acquisition cost. We prepare scenarios before launching the contract,” Steven said.

A key element in the public procurement is delivering societal value. This can include benefits identification and delivery to support local communities, driving opportunities for local jobs, or reducing environmental impacts. “These elements now form a major part of our procurement strategies,” he added.

Steven has a technical background, having worked as a test engineer in the electronics industry. Later, he was involved in the supply chain before eventually taking up assignments in the procurement field.

As he has worked both in the private and public sectors, what are the commonalities and differences in procurement operations?

“I would suggest that -- by its nature -- private sector procurement is driven at the organisational level. Its targets and objectives are set by their individual Boards of Directors. It is also less regimented and non-regulated. This gives the appearance of greater agility than public-sector procurement. Being in public sector procurement though brings with it a wider societal perspective, offering procurement the ability to shape and design beneficial outcomes for all. In this way, it can be very rewarding.

“There are some key factors from my private sector experience that help me succeed in this role. One of them is my technical and inquisitive mind set. I tend to meld the technological side and the qualitative side with market research. That is, I study supply markets deeply, and continually strive to deliver the best value,” Steven concluded.