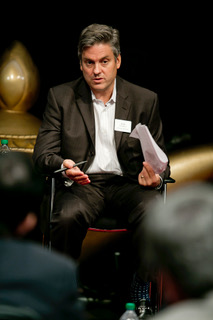 I have had a number of calls this past week from various media outlets, including the Associated Press, WRAL, Forbes, and even the New York Times!  All of them asked the same question, which was best captured by a reporter at Forbes:  “How is it that in a modern economy like the United States, where we have plenty of capital and strong demand, we can’t buy the things we need?” This is indeed a compelling question, but the answer is a bit more complicated than you might think.

Think of the film that came out a few years ago: “The Perfect Storm,” which depicts how a boat in Massachusetts was lost at sea. The storm was a nor’easter that absorbed Hurricane Grace, and ultimately evolved into a small unnamed hurricane itself, late in its life cycle.

Its comparison to the current state of the product supply chains is appropriate, as the root cause of these shortages cannot be attributed to a single event, but rather to a multitude of different events that coincided with one another simultaneously, (or at least in the same period of time), which resulted in a domino effect that caused the problems.

I disagree 100 percent with the Fed Chairman’s assessment last week in Jackson Hole that supply chain problems are a temporary issue: on the contrary, inflation and shortages are likely to continue for some time.

Fed Chairman Powell dismissed the fastest run-up in prices in years with a wave of his hand:  “So far largely the product of a relatively narrow group of goods and services that have been directly affected by the pandemic and the reopening of the economy”.  He argued that this price inflation will soon pass as supply constraints ease.   This assessment is dead wrong in my opinion, and we are likely to continue seeing unrelenting high prices and plenty of constraints for some time to come.  At least that is my two cents.

Let us start with COVID-19.  We know by now how the semiconductor shortage occurred when the automotive industry failed to order enough chips, which led the semiconductor industry to reduce capacity.  When demand peaked for vehicles and electronics, this came as a surprise.  One cannot start producing chips quickly after shutting down a fab, and adding new fab plants is a significant investment, often involving billions of dollars and years to put into place.  As a result, chips will likely not catch up with demand until late 2022, and this will continue to impact not just automobiles, but virtually every electronic product you can think of.  Even Apple is reporting chip shortages for their phones and other products.

COVID-19 has also hit a number of key ports, like the port of Yantian, which is a major outbound port for shipping to the U.S.  Once a port shuts down, ships and containers back up, and this bottleneck is difficult to overcome.

Periodic port closures also occurred in other parts of the world due to the proliferation of the Delta variant. I have already spoken about the major container shortages, the shutdown of the port in Shenzhen, China, and the longer dwell times in ports, resulting in container prices jumping to $6,300 and staying there.

This drives up the costs of imports from China.  Many U.S. ports are also slowing down because of labor shortage! There are not enough workers to unload ships.  Moreover, there are container issues. The problem with containers is that most of them are stuck in the U.S., but need to be at ports and manufacturers in China!  For the first time in rail container volume index history, non-holiday empty containers outnumber the loaded container volumes heading to Los Angeles. This occurred briefly at the beginning of 2019 around New Year’s Eve when the trade war with China escalated. Empty international containers are mainly controlled by maritime operators and can signal import volume growth. This one, however, may simply illustrate how dire the situation is.

Hurricane Ida and the big Texas freeze are important elements of a perfect storm.  As supplies tighten, prices for polyethylene, polypropylene, and other chemical compounds used to make auto parts, computers, and a vast array of plastic products have reached their highest levels in years in the U.S.  Not only were petrochemical plants shut down, but many also had to order parts damaged in the storm, which in some cases have long manufacturing lead times of 30 days or more.

All we know is that when Ida hit the southwestern Louisiana coast, those plants were evacuated, and many of them have no power, and may not have power for several days or weeks.  This is going to make an already problematic situation for resins even worse, which means more shortages.  Resin shortages are hitting healthcare manufacturers who use them for tubing, plastic components, and other parts used in many products.

Structural steel prices are now through the roof, literally, as steel beams are typically used for framing new DC and warehouse structures. The growth in warehouse construction has led to massive structural steel demand, especially bar joists.  Historically, bar joist lead times are 12 to 14 weeks, depending on the region.  Today, they have reached 32 to 50 weeks!  This varies by region.  In areas like the Mid-West, that are not as busy, you can get bar joists in 32 weeks.

If you are buying them in Florida, the Southeast, or New Jersey, lead times are well north of 40 weeks, and likely closer to 50.  This is a major disruptor of capacity expansion plans.  Additionally, prices for bar joists have gone up 300 percent.

Prices are unpublished, as fabricators typically send out drawings based on an architectural plan and specifications, but our sources suggest prices have escalated from $1,200 to $4,000 per ton today.

This level of price escalation has never been seen in the industry, based on our discussions with experts.  Copper is also at an all-time high.  Therefore, the basic building blocks for construction, beer and soda cans, and electrical products are going up in price everywhere.

All these shortages are hitting manufacturing.  I tried to order a fridge in August, and was told that delivery would be sometime in December, if I am lucky.

Trying to buy any type of appliance, bicycle, or other products today is a hit-and-miss process.  This means that people have money to spend, but have trouble finding the products they want to spend it on!

In my opinion, what we are seeing are true shortages, coupled with excess demand.  I also believe that the holiday season is going to leave many kids with a backorder ticket in their stocking, as I do not believe supply chains will recover in time for Christmas. This could also result in some downtrodden financial earnings because of inflation and lack of revenue due to product shortages, which could lead to a very different economic picture.

I do not mean to be a downer, but I believe these shortages are going to last through the better part of 2022, and likely into 2023.  A much less rosy picture than that of the Fed.

What can executives do?

Sales and Operations planning is something that can help, and having realistic views of what you can promise and deliver to markets is an important part of advance planning.

However, there may be little that can be done about supply shortages.  This helps form realistic forecasts.  Forecasting is not easy if demand is unstable, and demand cannot be easily forecasted using common forecasting time series models.

The answer lies in using consumption-based forecasting and real consumer consumption data to better understand what is happening, and then connecting it to other events through econometric or event-planning data, using outlier analysis.  By building more robust and realistic plans in the face of probable continued shortages, supply chain managers can find ways to deal with a difficult situation and make the best of it.