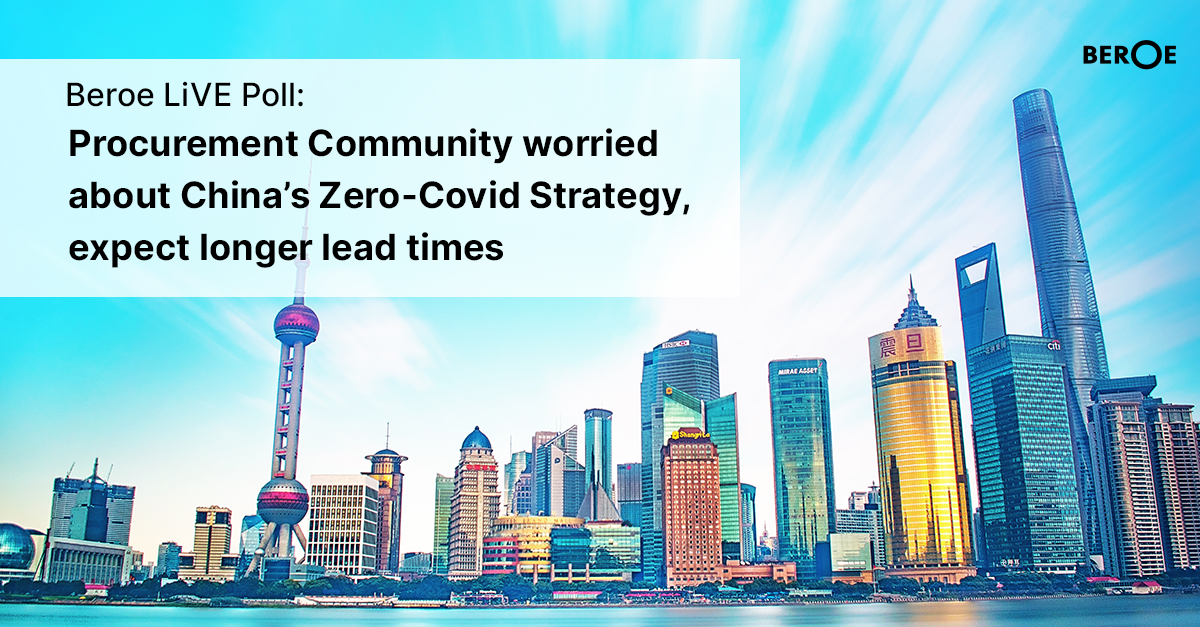 Ever since the outbreak of the COVID-19 pandemic, China has been following a zero-tolerance approach, leading to frequent lockdowns of major economic centres whenever cases flare up.

China is now in the midst of its worst wave since the initial outbreak in Wuhan. Shanghai, a city of 25 million people, is currently under lockdown. Besides being the financial nerve centre and home to the world’s busiest port, Shanghai is also a hub for semiconductor, electronics, and car manufacturing. Important cities in China are experiencing on and off restrictions, affecting goods movement.

On April 11, news emerged that the U.S. has ordered all non-emergency consular staff to leave Shanghai, which is under tight lockdown to contain a COVID-19 surge. The order covers "non-emergency U.S. government employees and their family members from U.S. Consulate General Shanghai."

The State Department said the order is an upgrade from the "authorized" departure issued last week that made the decision voluntary. https://beroeinc.co/38zvgmo

BBC China correspondent, Stephen McDonell, posted a tweet that said China’s Foreign Ministry lodged solemn representations with the U.S. after the decision to get non-essential staff, from the Shanghai Consulate due to COVID lockdowns.

#China’s Foreign Ministry says it’s lodged solemn representations with the #US after the decision to get non-essential staff, from the #Shanghai Consulate, out of the locked-down city b/c of the #Covid crisis. #Beijing worried it makes the situation appear to be out of control?

There are multiple reports on social media accounts of food shortages in Shanghai. Lately, food stockpiling has become a hot topic on Chinese social media as news spreads of the plight of Shanghai residents who are struggling to secure food supplies under lockdown, according to a report published in South China Morning Post (SCMP).

Over the past week multiple survivors’ guides have been published by media outlets and bloggers. These include a well-known medical site called Doctor Clove, which published a list of what items people will need if they are suddenly quarantined and advice on storing food for the long term, SCMP reported. (https://beroeinc.co/3Jzx5wr)

Dr Eric Feigl-Ding, an epidemiologist and a Covid expert committee member for the World Health Organization, told BBC's Newsday program that China’s zero Covid policy is “at a tipping point”. “If they don’t control covid… it could kill hundreds of thousands if not millions… this could actually break down the core social contract” and the world’s global supply chain. He says: “It is in our interest that China succeeds in controlling this". To listen to the audio, please click here: https://beroeinc.co/37DKvdB

As countries across the globe learn to live with COVID-19, China is continuing to pursue “Zero-Covid Strategy” while trying to not cause economic pain -- a tough balancing act. In light of this, Beroe ran a survey to find out the opinion of Beroe LiVE Procurement community about supply security.

Sourcing and Supply Chain professionals from more than 300 companies across the globe participated in the survey. 30 percent each were from North America and Europe. About 21 percent respondents were from Asia. 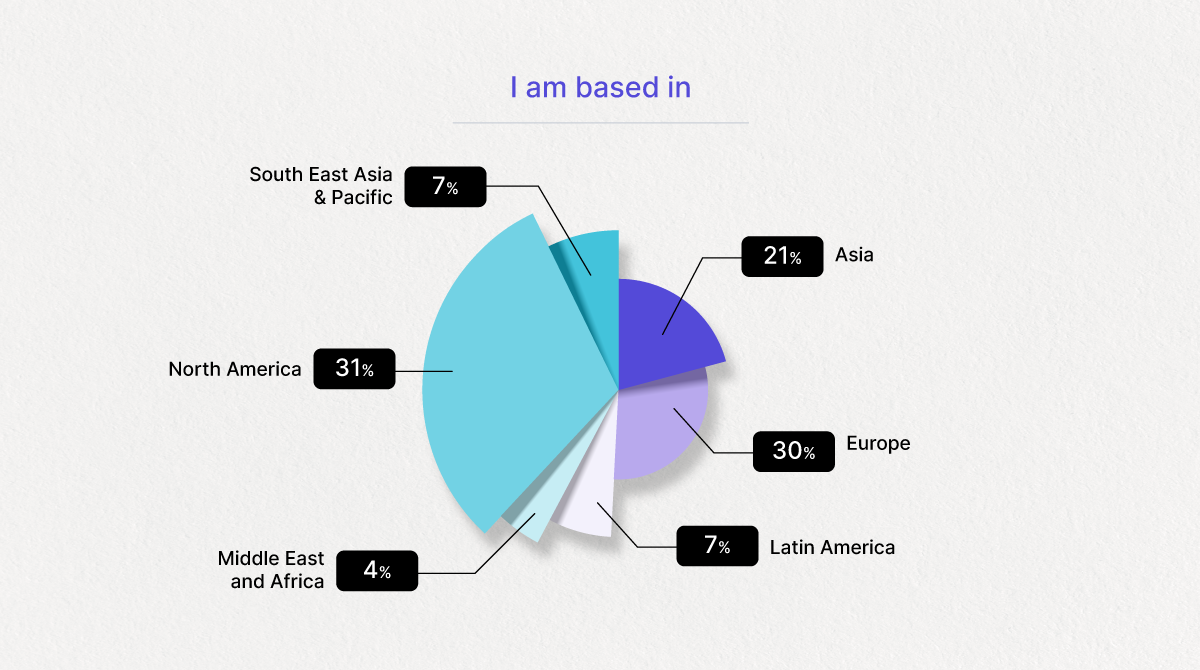 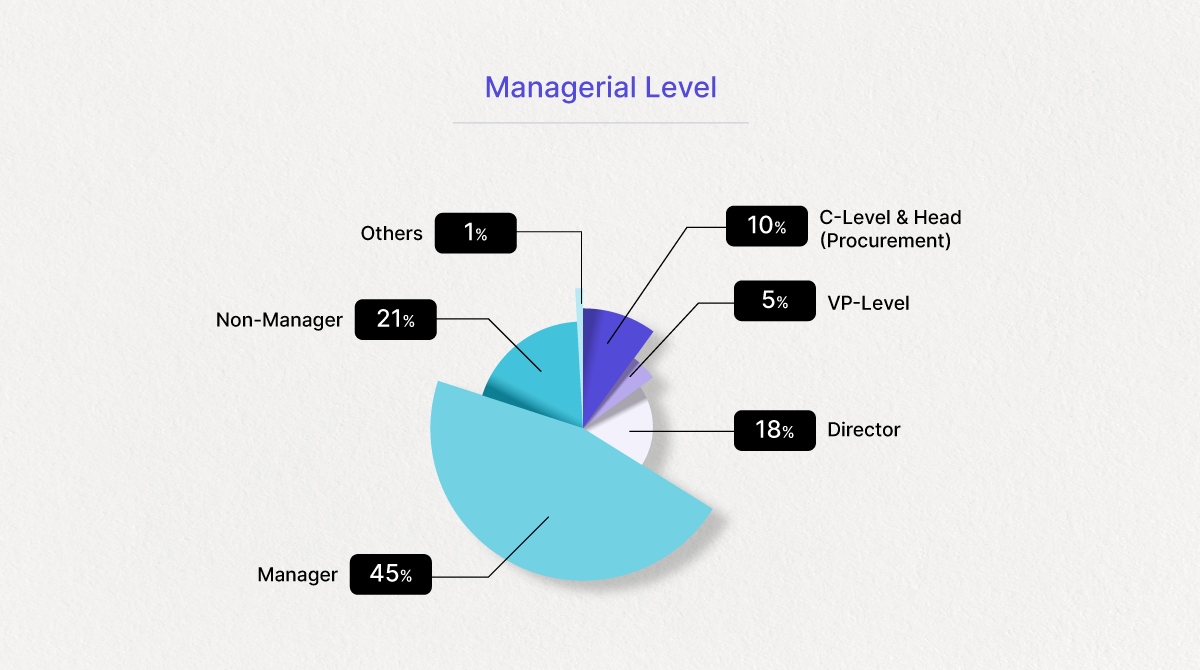 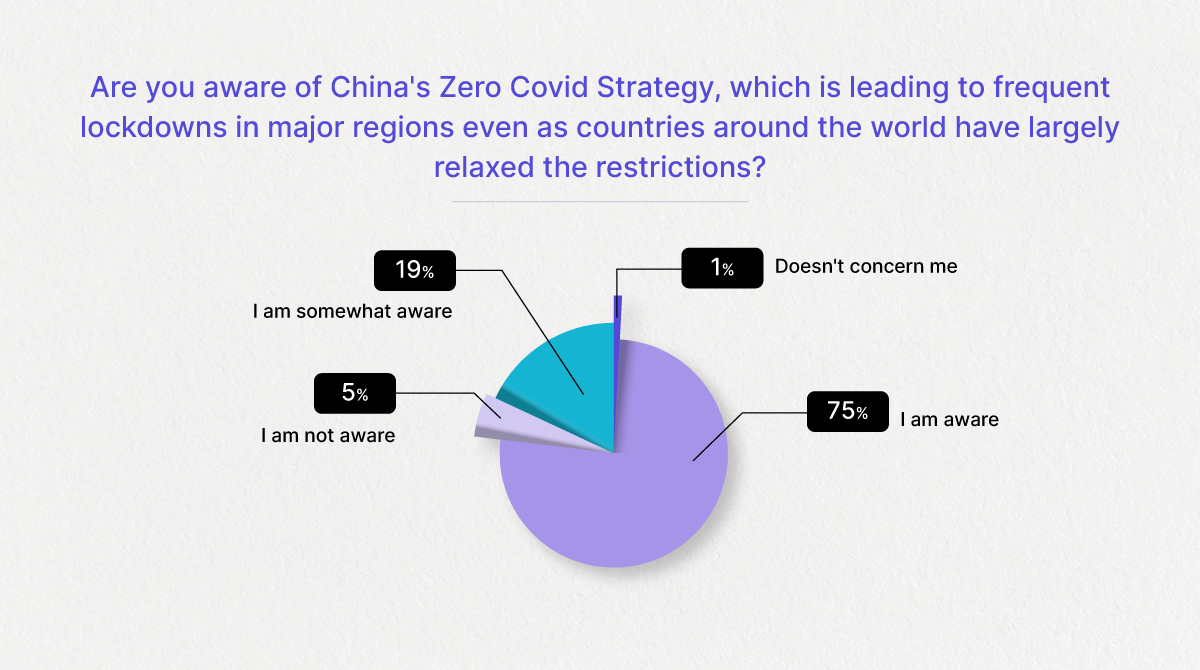 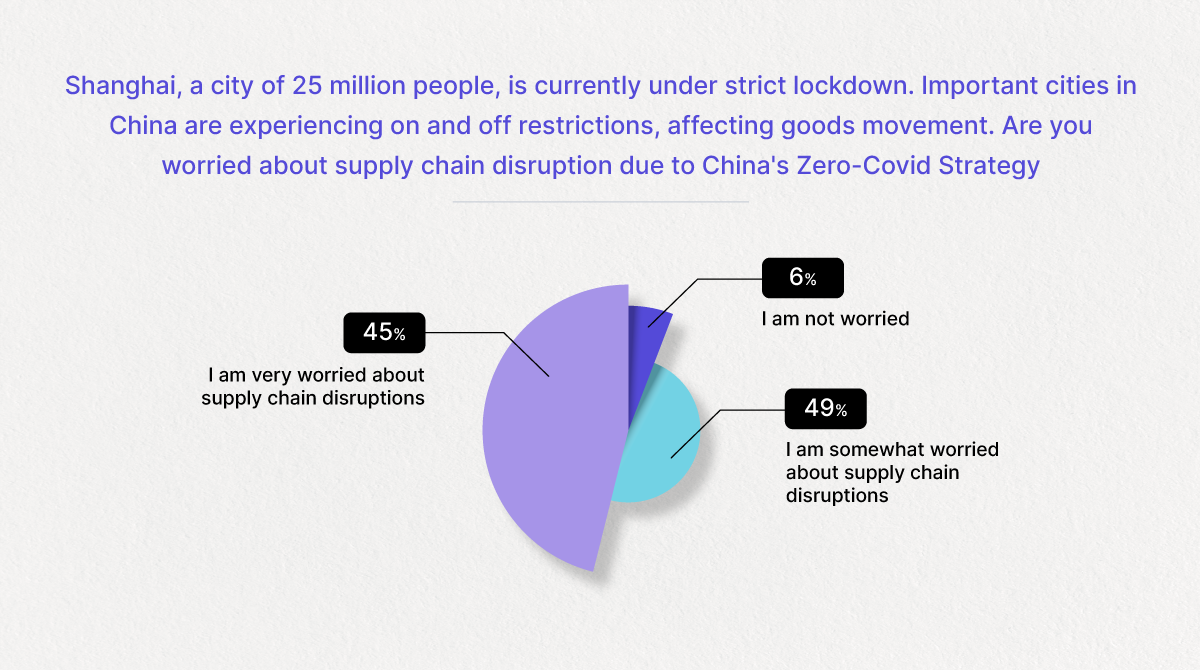 Shippers are facing logistics challenges for ocean and airfreight in Shanghai.

More than 90 percent of truck capacity is out of service. Trucks are prevented from moving in and out of the city without a special permit, which is only valid for 24 hours and only on specific routes. “Even with this arranged, it is possible for booked trucks to be commandeered by the government to transport aid supplies,” Seko Logistics said in an update for clients, according to a report by Freighwaves. Logistics providers are also redirecting cargo to airports in Wuhan, Hangzhou and Nanchang. https://beroeinc.co/3jvnwUP

The below table was published by logistics company, AIT Worldwide on April 7. (https://beroeinc.co/3rixLjq) 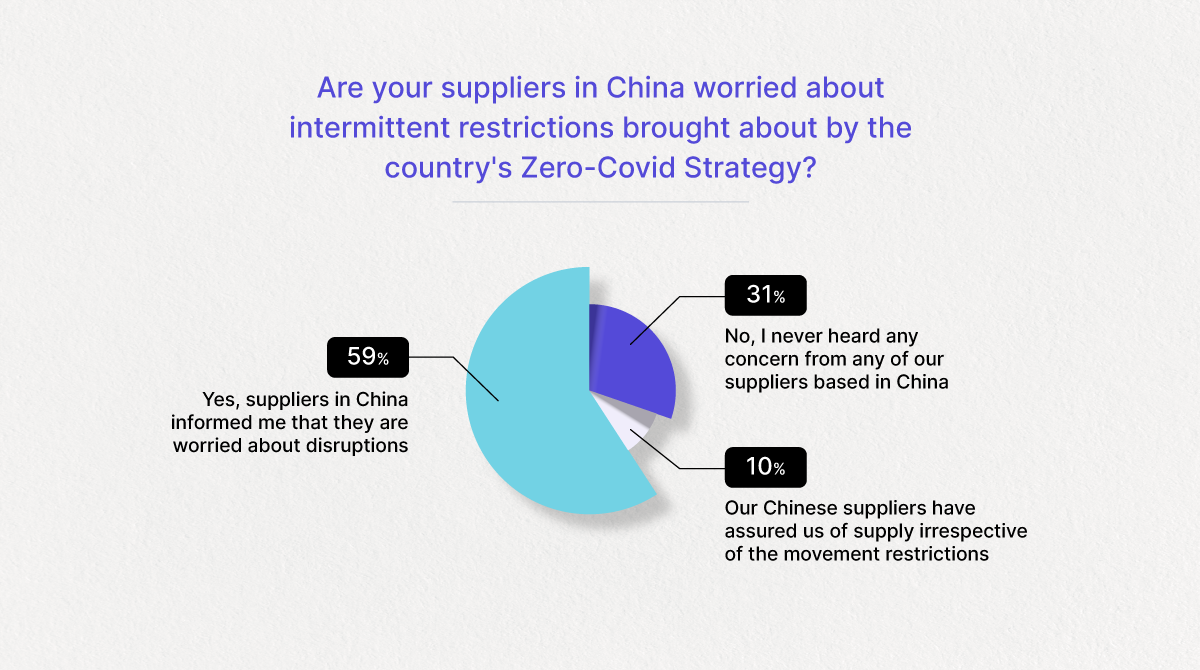 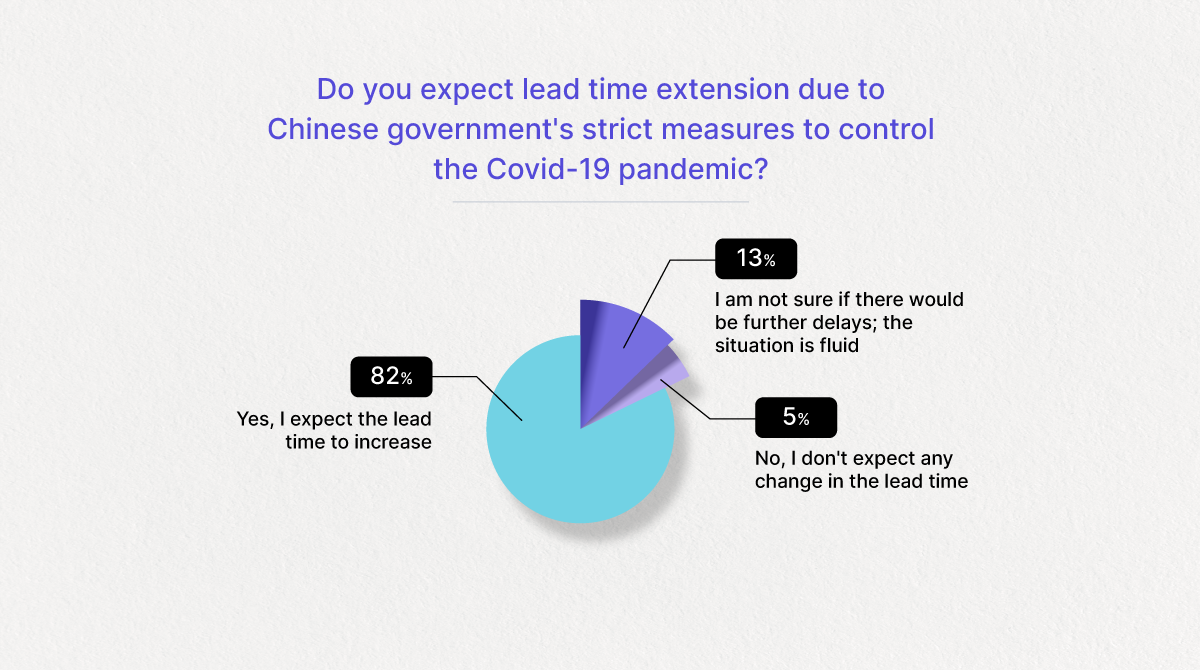 When questioned whether they have planned for such a scenario, 55 percent said they did, while nearly 20 percent answered they had backup plans during peak covid period but not now. Nearly 27 percent of respondents said it is currently business as usual. 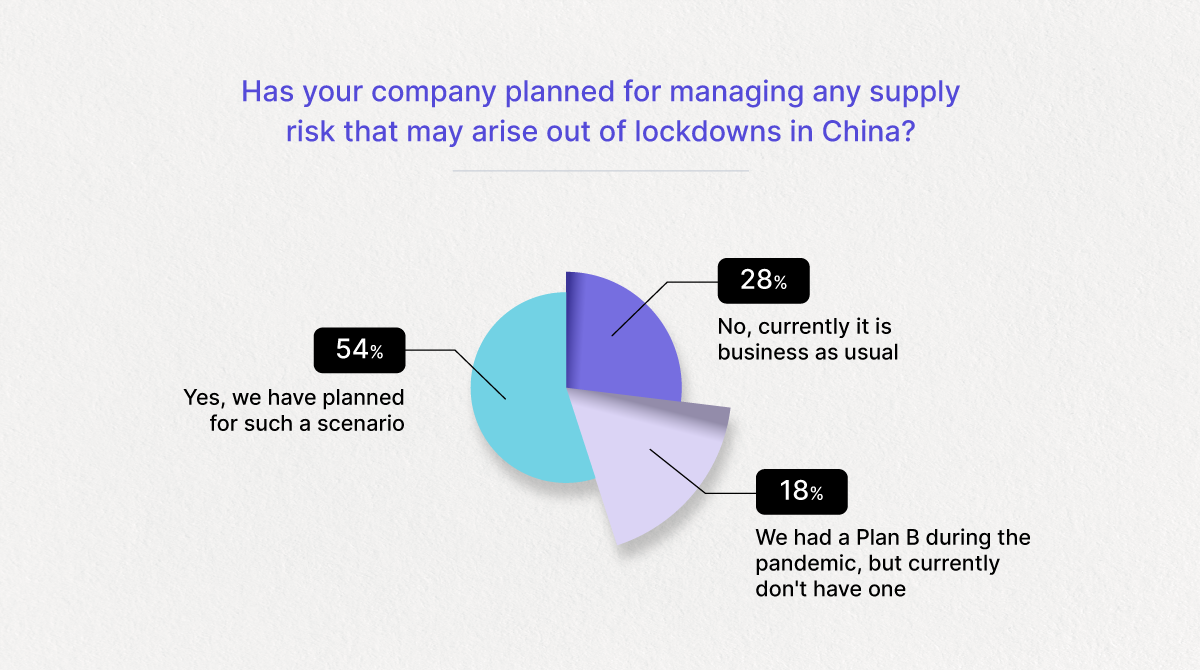 Here are the selected comments from respondents received by Beroe. We are not revealing their names as they are not authorised to speak on behalf of their companies.

For questions or clarifications, please write to contactus@beroe-inc.com