Sourcing strategy for VFD rigs varies based on E&P operations

Indian work-over market is estimated to be worth $75.88 million. With nine suppliers, India has always been a supply-surplus market with easy availability of readily stacked rigs to pursue drilling. However, things changed in 2017 as industry faced the first ever VFD rig shortage.

Among the various capacity of VFD rigs, 2000 HP is the most sought by E&P operators. With deeper wells and high pressure wells, the demand for 2000 HP is increasing.

The demand for work-over rig is expected to increase further more from 2017 due to the latest Hydrocarbon Exploration and Licensing Policy. 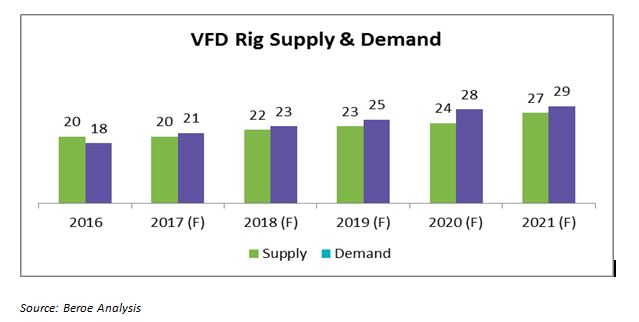 Reasons behind increase in demand for VFD drilling rigs

Marginal field auction, increase in demand for directional drilling and horizontal drilling, and increased drilling in high terrain fields are seen as the key reasons for shortage of VFD rigs.

Recently, Ministry of Petroleum and Natural Gas (MOPNG) under Indian Government offered small and marginal oil & gas fields under its new Hydrocarbon Exploration & Licensing policy with an aim to bolster the domestic production. Fields awarded under the auction were previously explored by big players. However, development of these fields was abandoned as it became unviable for companies. As the import of crude oil for domestic consumption increased, government sought to reactivate these fields in a step to boost the domestic production.

Therefore, MOPNG came with the idea of auctioning these fields. To increase the participation from oil companies and in a bid to invite new players to the industry, requirements to bid for the field were relaxed. As a result, several new entrants to the oil & gas industry won the bid to explore these marginal fields and develop them.

While the fields awarded are explored earlier and wells drilled, they are completed with proper installation of well heads for pursuing development activities later. Therefore, the focus for smaller E&P companies will be on servicing these drilled wells to reduce the exploration risk. Hence, demand of work-over rig is set to increase.

Indian states of Assam, Tripura and Arunachal Pradesh have some of the high terrain hydrocarbons fields. These fields have well depth of 3000 meters and more to reach the gas reservoir. Latest discovery of gas fields in Tripura has increased the drilling activity in the state. Given the high terrain, oil companies prefer to go with single-pad multi-well drill that helps to reduce the need for individual field development plan. With strong preference for directional drilling, E&P companies hire only high-power VFD rigs to manage the drill program.

Oil & gas exploration involves huge investment with high level of risk. Delays in hiring the rigs can be costlier for the E&P operator as the production is impacted directly.

Risk of increase in day rates – With increasing demand for workover rigs, E&P companies are rushing on to seal the workover rig contracts to avoid risking the rig availability. As an impact, day rates of 2000 HP rigs have gone up by $1,000 per day in 2017 in comparison to 2016. 2000 HP workover rigs attracted an average day rate of $21,000. Even though oil prices stayed lower over last 12 months, the day rates for workover have reached $22,000 owing to the increased demand.

Delayed production risk – E&P operators have to adhere to timelines defined by the DGH for field exploration, drilling, development and production. Therefore, lead time for workover rig in managing the production schedule. Delays in procuring workover drilling and associated equipment can delay the well intervention plans of operators. Especially, operators with single or smaller oil fields cannot afford to have any delays as it can increase the non-productive time impacting the production.

Budget risk – As most of the new E&P operators with smaller fields have constrained budget, it is essential to manage the drilling, completion and production schedule. With prevailing lower oil prices, any delays in operation or reservoir complication can completely squeeze their budget.

Government procurement guidelines – Under the exploration licensing policy, E&P operators must follow certain procurement rules while procuring service equipment such as rigs. When there is a rig shortage with the suppliers, there is a risk for E&P to find at least three bidders for the contracts.

Though risks cannot be eliminated completely, they can be minimized. By choosing the appropriate sourcing strategy and contract type, E&P operators can safeguard themselves from risks due to workover rig shortage.

Risk of increase in day rate for VFD rigs can be negated by E&P operators with long term contracts, typically for three years. In most workover contracts, contract duration is the deciding factor in finalizing the day rates. Longer terms are found more attractive by the rig owners as it assures the rig owner with consistent revenue. Therefore, it is essential for E&P operators to make use of negotiation to leverage for lower day rates.

From the operators’ perspective, long term workover rig contracts give a cost saving of 15-20 percent. Moreover, it eliminates the risk of rig unavailability which is likely to incur a significant cost for the operators.

While majority of the Indian workover rig suppliers buy rigs outrightly from the Original Equipment Manufacturers, few suppliers have their own fabrication unit. With fabrication and assembly unit, these suppliers cater to the demand for E&P operators with a lead time of 9-12 months. In such cases when the need for workover is immediate and for a longer duration, E&P companies can prefer to have joint ventures with the rig OEM to have a secured rig supply for longer duration. Skipping the supplier stage in this JV can help E&P operators in reducing the day rates for VFD rig.

Real time example – Recently, Saudi Aramco entered into a joint venture with offshore drilling rig supplier for jack up rigs.  The joint venture will initially own seven offshore rigs while four additional rigs will be added in future. By entering into the JV, Aramco has ensured it supply chain for drilling rigs. This eliminates the risk of rig unavailability and ensures that production schedule is met with planned timelines.

When E&P operators get into a JV, the rig fleet comes under the operators. This will help E&P operators to mitigate the risk arising due to the government procurement rules which require a minimum of three bidders for a contract.

Given the utilization rate of 55 percent for VFD rigs, rig sharing is one of the options to ensure procurement of VFD rigs to avoid the supply risk. In long term contracts, there is a provision of ‘Assignment’ which is a novation of agreement allowing transfer of rig from one operator to another operator. Under rig sharing agreement, E&P operator hires rig from the supplier and shares it with another operator to maximize the efficiency.  Rig sharing is usually done in two different forms. Under type 1, single oil company contracts a drilling rig and shares the same with different subsidiaries holding the exploration license in the same field or other field. Under type 2, multiple operators together contract a workover rig. Under this type, the operators share the crews, supplies and equipment.